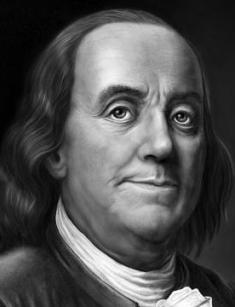 Benjamin Franklin went down the history of the United States as an inventor, politician, diplomatist, and philosopher, as well as a talented businessman, musician, writer, and editor. It is hardly possible to find a sphere where he had not tried himself. Franklin is called “The First American” and universal person; one can see his face on the $100 banknote. The politician’s role in history is so great that some people mistake him for an American president.

Benjamin was born in Ecton into the large family of a soaper. In 1662, Josiah took his family from England to America: the Puritan was afraid of religious persecution.

Benjamin was the 15th child in the family; he had two younger siblings. At the age of eight, the boy started attending a school but had to quit it two years later, for the father had no extra money for his education. Ten-year-old Benjamin assisted his dad at a soap factory, but the exhausting work did not make him less interested in studies. In the daytime, he would melt wax for candles and make soap; evenings were devoted to reading. The father could not buy books, and the future politician borrowed them from friends and acquaintances.

Although the parents were glad their son was smart, Ben was reluctant to work at a soap factory; it made them sad. The father wanted to see him as a priest, but the 15th son disliked this option as well. Thus, Josiah sent him to the elder brother, who had opened a printing house. 12-year-old Franklin was an apprentice there and eventually took an interest in printing and creating ballads. The brother published one of them. However, the father did not approve of this hobby, for he treated poets like paupers.

When the brother started publishing a newspaper, 16-year-old Ben realized that his journalist career would finish, should his father reveal the truth. The young man wrote notes in the form of letters and unmasked social morals, using a pseudonym; these pieces of writing were popular among readers. However, when the brother learned who the author was, he kicked him away.

Franklin saved some money and fled to Philadelphia, where he got hired at a publishing house. The young and clever employee was noticed and sent to London to buy equipment and open a printing house for governmental orders in Philadelphia. Benjamin loved the British press so much that he began to publish his own newspaper and almanac a decade later. They proved to be beneficial and provided the family with everything necessary; Franklin had the opportunity to focus on science and politics.

Benjamin Franklin started his political career in Philadelphia and founded a discussion club; it transformed into the American Philosophical Society in 1743. Thanks to Franklin, the first open library appeared in the country in 1731, when it was still a British colony. At the age of 15, the young man worked as a secretary at the Pennsylvania Assembly; he became its leader later. In addition, he governed the state post office and then the departments in other lands under the British guidance.

From 1757, Franklin represented four American states in Great Britain; he did this job for 13 years. In 1775, the politician joined the Second Continental Congress led by Thomas Jefferson and contributed to the creation of the emblem of the USA (The Great Seal).

In July 1776, when the Declaration of Independence was signed, “The First American” led the group that went to Paris to support the country in its war against Great Britain. By winter 1778, Franklin got the French signature; the talented diplomatist stayed in Paris as an ambassador. He joined the lodge Les Neuf Sœurs (Nine Sisters), becoming the first American mason.

In the 1780s, the politician represented the USA in London and signed The Treaty of Paris, which marked the end of the American Revolutionary War.

Franklin characterized democracy as the correlation of forces with “two wolves and a lamb voting on what to have for lunch”. Long before Adam Smith, he created and proved the theory of value; labor, not money, was named its standard. In the early 1770-1790s, the politician was working on his autobiography; he never finished it. It was supposed to be the memoirs about the brightest events in the man’s life; The Autobiography of Benjamin Franklin was released after his death.

A Dissertation on Liberty and Necessity, Pleasure and Pain, The Way to Wealth, and Poor Richard’s Almanack are among popular books. The legendary personality has attracted many directors: one can see him in John Paul Jones, John Adams, and Sons of Liberty. The latter is the most recent project by Kari Skogland; the mini-series starred Dean Norris as Franklin. The story is set in the USA when the country was still a British colony.

The American War of Independence

During the war, Benjamin Franklin worked on the plan of the Colonial Union and became the head of the Post Office Department; he co-authored the Declaration of Independence and served as the advisor of the Chief of the Army George Washington.

When the newly-born republic needed allies, Franklin went to France and performed his duties spotlessly; France became the first European country to recognize American independence in 1778.

Franklin showed much interest in sciences in his early childhood. One day, little Ben appeared on the seashore with small boards on his feet and hands; this invention (flippers) helped surpass his competitors. Soon, the boy amazed his friends again: he took a paper kite and used a tail-wind. He backed on the water and held on to the rope, moving on the surface quickly, as if the kite were a sail.

Considering Franklin’s political and diplomatic activities, he did not have much time on scientific experiments: about five or six years. Still, he reached remarkable results at this short time: electricity research, thermal conductivity of metals, and sound spreading in water.

The scientist studied and tamed the heaven’s fire which caused destructive fires during storms. As long as a lightning discharger was created, the number of such catastrophes decreased; Immanuel Kant called Franklin “the new Prometheus”. Besides, the man offered the plus and minus signs for electrical charges, bulbs for street lamps, and flat condensers.

Franklin’s relationships with women make a specific chapter in his life; the amorous man was not a loyal partner. He met Deborah Read in Philadelphia; she became his fiancée soon. However, the diplomatist had to go to London and fell in love with the daughter of his apartment hostess. The young woman gave birth to the son William.

When Benjamin came back to Philadelphia with an out-of-wedlock child, Deborah accepted them; she was a grass widow whose husband had left her and escaped from collectors.

Two children were born in this union later: the daughter Sarah and the son Francis, who died of smallpox at four. The life with Read was not happy; the couple spent two years together.

Charming and impressive, Franklin had many lovers. In the mid-1750s, he met beautiful Catherine Ray; they maintained romantic correspondence until the politician’s last days. The affair with the landlady continued for several years; rumors had it the man was flirting with the hostess and her young niece at the same time.

In 1745, 39-year-old Franklin wrote his famous letter on an intimate topic; it was addressed to a nameless friend. The letter was stored in the archives of the State Department and published in 1926. Benjamin recommended his friend to choose older women and shared the details about why they were better than young girls.

Millions of people shed tears over the death of “the First American”; nobody was buried with such honors. The county was mourning him for two months.

Laws too gentle are seldom obeyed; too severe, seldom executed.

The first degree of folly is to conceit one’s self wise; the second to profess it; the third to despise counsel.

Those who give up liberty for security deserve neither.

Buy what thou hast no need of and ere long thou shalt sell thy necessities.

Critics are our friends; they show us our faults.

A crown is no cure for the headache.

Pride breakfasted with Plenty, dined with Poverty, supped with Infamy.

The one who lives with hope, risks to die of starvation.

A ploughman on his legs is higher than a gentleman on his knees.

At twenty years of age the will reigns; at thirty, the wit; and at forty, the judgment.

He that is of the opinion money will do everything may well be suspected of doing everything for money.

Don’t put off until tomorrow what you can do today.

Moving three times is as bad as a fire.

To find out a girl’s faults, praise her to her girlfriends.

A person good at making excuses is seldom good for anything else.

Whatever is begun in anger, ends in shame.