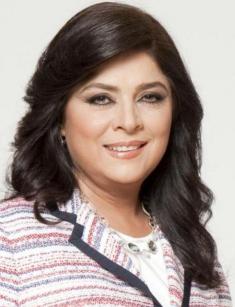 Victoria Ruffo is a famous actress of Mexican TV series. Telenovela with Victoria in the lead role has become popular both in her native country and outside Mexico and even Latin America. The viewers know Victoria Ruffo from the TV series Simplemente María, Victoria, La madrastra, and other melodramatic series that have been translated into different languages and loved by several generations of viewers.

Victoria Ruffo was born on May 31, 1962, in Mexico City. The Ruffo family did not stand out among other Mexican families, the girl's father, Ramon Martinez, and mother, Guadeloupe Morena, were ordinary civil servants. Victoria grew up with her sisters, Marcela and Gabriela, who also dreamed of working on television.

Victoria herself seriously thought about the career of an actress for the first time after visiting a fashionable Mexican photographer. Her sister Marcela brought Victoria to the shooting. The photographer was fascinated by the beauty of the young Ruffo and advised her to try yourself in the movie. This praise spurred Victoria to work harder to develop artistic talents, so the girl learned poetry by heart, attended dancing and music classes. Victoria played the major roles in all school performances and took part in talent contests. She also attended auditions and castings with her sisters.

When Victoria was 14 years old, her parents divorced. It was hard for the future movie star to go through this. The sisters stayed with their mother, who got a job as a real estate agent to be able to support her family after the divorce.

After school, Victoria entered the prestigious Mexican Academy named after Andrés Soler, where she studied acting.

The creative path of the future soap opera star began in teenage years. At the age of 18, Victoria Ruffo starred in her first multi-episode film called Discoteca es Amor. Film producers noticed the talented actress and invited her to larger projects. The first serious work for Ruffo was the project Conflictos de un Médico, released in 1980. The audience reacted favorably to the young actress. After the premiere of the telenovela La Fiera, where Victoria played the role of Natalie Ramirez, she finally gained well-deserved fame in Latin America. For her role in the series, Ruffo also received her first award as the best young actress of the year.

Participation in the La Fiera opened for Victoria the way to major roles in telenovelas. In 1985, the TV series Juana Iris was released, where the actress played the character of the same name.

In 1989, the world saw the cult soap opera Simplemente María. The Victoria's character, María Lopez, a poor and naive girl who came from the province to the capital, was so loved by the audience that she immediately became an idol. Ruffo was nominated for the Best female lead role but didn't win the award.

Simplemente María was the series which had enormous success in the countries of the former Soviet Union. The actress was invited on local TV, interviewed and was offered to star in the series. Victoria's popularity was so great that people named their children in honor of her heroine, and in Belarus, a new cultivar of apples was called Simplemente María. The actress also starred in a commercial of Sergei Mavrodi's famous company called MMM.

Victoria Ruffo preferred to continue her career in her motherland, Mexico, in the television company Televisa. In 1993, she starred in the series Capricho, after which she worked in Pobre niña rica, Vivo por Elena and Abrázame muy fuerte, where César Évora was Victoria's partner on the set. These projects were extremely popular in Latin America.

In 2005, Victoria Ruffo played the major role of Maria Fernandez Acuña in a melodramatic series with elements of detective, action and thriller La madrastra, where the partner of the actress was César Évora again. The series gained popularity outside Latin America, and in 2007 was voiced in Russian by the TV channel Domashniy.

In the series Victoria, a Mexican remake of the Colombian telenovela called Señora Isabel, where the actress also played the lead role. Victoria Ruffo got a secondary role only in 2008 in the television series En Nombre del Amor. Then again, the actress appears on screens only in major roles. From 2010 to 2011 the world sees the television series Triunfo del Amor, and from 2012 to 2013 – Corona de lágrimas, both with Ruffo in the lead role.

The actress continues to star in the genre of telenovela till now. One of the last was the series La malquerida, released in 2014, where she played the protagonist, Cristina Benavente de Domínguez. Ruffo is one of the most successful and highly paid artists of the Televisa channel.

In addition to a successful film career, Victoria Ruffo has also achieved considerable success in other areas, she takes part in theatrical performances, is the host of several programs on Mexican television, and also prepares photo reports for commercial publications.

Victoria met with her first husband, actor Eugenio Derbez, on the set of the series Simplemente María. Eugenio is the son of the famous Mexican actress, Silvia Derbez, who also took part in the series, and regularly visited his mother on the set. The relationships developed rapidly, and in 1991 the couple got married. A year later, they had their first son, Jose Eduardo.

The couple tried to maintain the image of an ideal and happy couple, but Victoria's husband could not put up with the popularity of his wife for a long time. He regularly tried to prove to the actress that she achieved fame only thanks to a successful coincidence. In 1996, Ruffo filed for divorce, not a second doubting the correctness of her decision. However, Derbez with the support of his mother again made a scandal in the press. He told reporters that his ex-wife forbids him to communicate with his son. Such actions have forced Victoria to finally сut all ties with her ex-husband.

In 2001, Ruffo married for the second time. Her lover is a Mexican politician, Omar Fayad. The wedding was held in Mexico City in the Church of St. Augustine, after which the couple went on a trip around the world. Omar quickly became friends with the son of Victoria and though did not replace his father, became a real friend and adviser to him.

In 2003, the 40-year-old actress found out that she was pregnant. Despite all the fears of doctors in 2004 at the Victoria and Omar gave birth to twins, a boy Anuar, and a girl Victoria. Today, the popular actress tries to devote all her free time to children and her husband. Ruffo family lives in a penthouse in Polanco, a prestigious area of Mexico City, where live only politicians, movie stars and famous sportsmen.

In 2016, the family of the actress got involved in a scandal. The tabloids published an article that the idyllic family life with Victoria is just a cover for Fayad's unconventional sexual orientation. In response to these rumors, the actress just laughed.

In 2016, the actress got the lead role of Inés in the Mexican drama series Las Amazonas. Victoria Ruffo is in demand in theater and cinema and continues to receive only the lead roles even though in 2017 the star of Mexican melodramas turned 55 years old. At her age, the actress doesn't think about plastic surgeries. Victoria Ruffo told reporters that she wouldn't perform the operation for the sake of vanity and that she didn't want to turn her own face into a motionless mask.

The actress deliberately doesn't star in more than one project in two years. Victoria admitted to the press that the priority for her now is the family and grandchildren. However, the actress is very different from the average granny. For example, Victoria Ruffo has a verified account on Instagram, where she has 659 thousand followers.