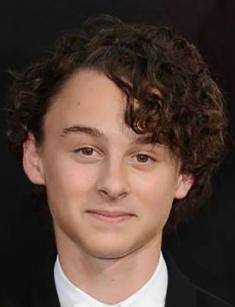 This young actor earned his fame for the role of young Peter Quill in the 2014 Marvel movie Guardians of the Galaxy. He also personified Stanley Uris in the remake of the horror It (2017); this character made the artist tremendously popular, especially among teenage girls.

Wyatt Jess Oleff was born on July 13, 2003, in Chicago, Illinois. No details about his childhood or family are known; even Instagram photos do not reveal the secrets.

Judging by pictures in social networks, Wyatt’s childhood was full of work; even his leisure was somehow related to his career. Long ago the young man’s hit movie was premiered, young fans left messages and declared their love for the actor: they admired his early roles.

Oleff took his first steps in cinematography in 2012 at the age of eight: he received his debuting role in the TV series Animal Practice and personified young George in an episode.

In 2013, the actor participated in many projects. He appeared in an episode of the adventure melodrama with fantasy elements Once Upon a Time and played the antagonist, young Rumplestiltskin. The same year brought the American comedy series Suburgatory. Soon, the audience could see the young talent as Byron in the third season of the family comedy series Shake it Up!

The year brought not only episodic roles but also the first notable part: Oliver Bobeck in Middle Age Rage.

Further on, the artist’s career began to develop rapidly. He joined the cast of the adventure action with Guardians of the Galaxy that grossed more than $323 million in the United States. Wyatt portrayed the main character, Peter Quill, in his youth; Chris Pratt played the grown-up. In 2017, Oleff also took part in the movie sequel; the scene where young Peter lost his mother was so natural and touching, that experienced movie makers were impressed.

According to the artist, he managed to get into his character by remembering the death of his pet, Shih Tzus.

The third part of Guardians of the Galaxy is scheduled for 2012; whether Oleff will appear in the project is unknown.

In 2014, the young man also participated in the drama action series Scorpion and played Owen. This series pictures the teenagers whose unique brain abilities help them solve crimes.

Another 2014 movie, the comedy Someone Marry Barry, gave the young actor an episodic role. The next year, he joined the cast of two projects: Crafty: or Тhe Unexpected Virtue of the Girl in Charge of Snacks and the series The History of Us.

Just like any teenager, Wyatt spends his youth with friends and goes to parties with him. Judging by the photos on his Instagram, his colleagues from the horror It became his good friends.

Thanks to the remake of the horror, the young man’s popularity has increased dramatically, and Wyatt is in touch with his fans as much as never before; he has the official Instagram and Twitter pages. Sometimes, the celebrity complaints about excessive attention.

The artist likes to go to concerts; hip-hop is his favorite genre. Besides, Oleff learns how to pilot a helicopter and visits sports events.

Jaeden Lieberher is Oleff’s best friend; they often hang out together and pose for cameras. The actor has no girlfriend by now.

On September 7, 2017, the movie It based on Stephen King’s novel under the same title was premiered. Wyatt personified Stanley Uris, the member of The Losers Club. He could have missed this project: when filming began, the actor had to work on Guardians of the Galaxy Vol. 2. Nevertheless, the director Andy Muschietti insisted that Oleff should play Stanley: he did not see any other artist in this role.

Sharing his impressions about the work, Wyatt emphasized the 1980s music: he loved it so much that added some tracks to his playlists. Besides, the teenager told journalists he had much in common with his character.

The premiere of the horror sequel, It Chapter Two, is scheduled on September 6, 2019. The main characters will grow up and come back to their home city to face their old fears personified by Pennywise.