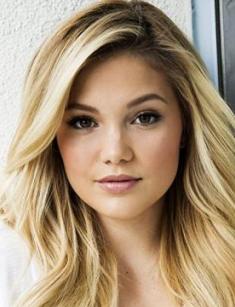 Cute fair-haired beauties are must-have characters in any youth series: they immediately grab everybody’s attention and stick in their memory for a long time.

Miley Cyrus from Hannah Montana and Blake Lively from Gossip Girl are some famous examples, but Olivia Hol,t the star of the series Kickin’ It is no less popular. The actress has also strengthened her positions in cinematography thanks to full-length projects: Girl vs. Monster and Status Update.

The future Disney celebrity was born on August 5, 1997, in Germantown, into the family of Mark and Kim Holt. The girl grew up with a brother, Cade, and a sister, Morgan Toll, who also chose an acting career. When Olivia turned three, the parents moved to Nesbit; they also lived in Memphis for a short while and settled in Los Angeles in 2011.

Olivia was a class vice president at school and participated in chess competitions; she was fond of cheer-leading and gymnastics as well. However, the young talent decided to quit sports in favor of music and cinematography.

The first cinematographic appearance took place in 2009 when the 12-year-old actress played in an episode of Black & Blue. Thanks to her good physical shape, Hold successfully auditioned for the lead role of Kim in three seasons of Kickin’ It. The series proved to be the top-rated Disney project that year and brought the young artist much recognition among the youth.

The collaboration with the channel proved to be a significant page in Holt’s life:

“Working with Disney is really and truly like working with a family. Everyone is so supportive and so wonderful. I’ve worked with Disney since I was twelve, and they’ve given me so many opportunities that I’ll forever be grateful for”.

Further on, Olivia expanded her filmography with the movie Girl vs. Monster about the dynasty of hunters chasing monsters. Radio Disney Music Awards called her song in the project the best one. The movie I Didn’t Do It provided the opportunity to co-star with the winner of the Academy Awards and three Golden Globes Renée Zellweger. Olivia played one of the twins and tried herself as a dramatic actress.

The fantasy comedy Status Update was premiered in 2018. Holt personified the coolest girl at school; the musician Ross Lynch’s (the group R5) character was the guy who fell in love with her.

Since 2018, the actress has been working on Marvel’s Cloak & Dagger based on the comics about two teenagers possessing superpowers; although it is less famous than Avengers, the project can boast its fans. The series also stars Aubrey Joseph. Besides, Olivia has had some voice roles, such as Morgan in the animated fairy tale Tinker Bell and the Legend of the NeverBeast.

The young woman is also successful as a singer. In 2014, she began to collaborate with Hollywood Records that opened Selena Gomez, Demi Lovato, and Miley Cyrus to the world. The premiere single “Phoenix”, music video, and mini-album followed two years later. The musician went on a tour and co-worked with the group Forever in Your Mind.

When actors collaborate hand to hand, they might become close outside a movie stage, and their roles might reflect on their real relationships. As the story of Girl vs. Monster runs, Luke Benward’s character was secretly in love with the protagonist but did not dare to speak about his feelings openly at first. One day, he plucked up the courage to do so, and the characters ended up with a mutual affinity. In 2012, Olivia Holt and Luke Benward announced their romance but split up later.

When Kickin’ It was released and the scene where the actors almost kissed, people started spreading rumors about Olivia’s affair with Leo Howard. However, the colleagues were just friends and had much in common at work. Later, Holt presented the music video “History” and gave Howard the lead part there.

The singer used to date her former classmate Ray Kearin, but they split up two years later.

At the end of 2017, the media reported a new probable boyfriend, the vampire-saga star Taylor Lautner: the blonde accompanied him at church. Still, the rumors were never proven.

In April 2017, Olivia Holt was named the Artist of the Month at Elvis Duran’s radio show. Soon, she recorded a track with the Dutch producer Martin Jensen, who was included in the top 100 DJs all over the globe by DJ Magazine.

According to the celebrity, she loves video games, especially Minecraft; she used to be a partner of PlayMG and helped the company create new versions for mobile apps. Olivia is an ambassador of the cosmetic brand Neutrogena. The woman’s height is 5.28 feet (161 cm.); her weight is 116.85 lbs. (53 kg.).

The star always looks fashionable, whether she is wearing a swimsuit, Versace dress, or extravagant makeup. She says: “My style is very simple, but I love Reese Witherspoon, Kate Hudson, and Kate Middleton”.

The actress likes horrors and flowers as a present; she is fond of caramel sweets Milk Duds: “Eating them tastes like heaven”. She adores her dog, Diesel.