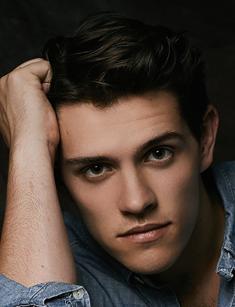 The American actor Casey Cott became a star after the teenage series Riverdale based on popular comics. The audience liked Casey so much that he was called the new Hollywood symbol; many people asked the studio to make the actor the lead member of the cast. Today, the number of the artist’s fans is increasing rapidly, and movie creators pay much attention to 25-year-old Casey.

Casey Cott was born in August 1992 in New York; the family moved to Chagrin Falls, Ohio soon. The boy’s father was an investment manager. Casey had an elder brother, Corey; later, the sister Carly was born. The children grew up in the artistic atmosphere and dreamed of acting.

Casey Cott debuted on the amateurish stage in Ohio theaters; he participated in Bloody Bloody Andrew Jackson and Romeo and Juliet. As soon as the teenager received his first appreciation, he liked the taste of fame.

After graduation, the young man followed his parents’ recommendation and entered Boston University to realize that his path was different: Casey felt that nothing but the stage inspired him.

The young man spent several years in the university and dropped his studies. Later, he enrolled at the Carnegie Mellon School of Drama and mastered his skills under the guidance of reputable teachers. In 2016, Cott finished his education. At that moment, his elder brother took the first steps in the world of cinematography: Corey Cott began to participate in American series in 2013.

As a student, Casey was extending his acting experience and appeared in amateurish plays. In 2014, he took part in Parade along with other Carnegie Mellon students; the play was staged at the New Hazlett Theater.

Similar to his brother, Casey has fascinating musical talents. In 2016, the actor was invited to the Broadway musical The Prince of Egypt by Stephen Schwartz; Shuler Hensley and John Cariani participated there as well. Cott gained the role of Moses.

The actor earned his fame for the secondary role of Kevin Keller in the teenage melodrama Riverdale based on Archie comics.

Roberto Aguirre-Sacasa and Greg Berlanti created the script for this project. It was aired first in January 2017 on CW Television Network and received high ratings and favorable reviews. Casey’s character, Kevin, is a young man who does not keep secret he is gay.

Riverdale tells the story about Archie Andrew’s life and adventures; the settled routine of a provincial Middle-West town Riverdale is illustrated. However, the peace is interrupted by the mysterious death of a young man, Jason Blossom. The teenagers become amateurish detectives who look for their friend’s murderer.

KJ Apa, Lili Reinhart, Camila Mendes, Cole Sprouse, and Marisol Nichols played the main characters. People loved the series, and the directors Lee Toland Krieger, Steven A. Adelson, and Allison Anders extended the project for the second season. In March 2017, The CW pleased the fans: the new season would appear in fall.

The premiere took place in October 2017. Following fans’ request, Casey became one of the main characters. Producers and critics explained this “promotion” by Cott’s splendid acting and charm. Thus, Kevin appears as often as Archie, Betty, Jughead, and Veronica in the second season.

Casey Cott’s height is 5.91 ft. (180 cm.). The actor’s face is open; he has expressive gray eyes and a charming smile. After the series Riverdale, the number of his fans multiplied. By the beginning of 2019, more than 4.3 million people follow the young man.

There is little information about the actor’s personal life. Some sources claim that Casey is gay; others insist that Cott dates his colleague, the dark-haired beauty Camila Mendes who played Veronica in Riverdale. Rumors are frequently spread: the artist is allegedly seeing the director Ian Wallace or the actor KJ Apa.

At the end of 2017, fans were talking about Casey’s romance with the actress Stephanie Styles famous for the melodrama The Submarine Kid and the western movie Justice; many photos of the couple appeared in social networks.

Casey Cott and Lili Reinhart are good friends. Overall, the actor is on friendly terms with all his colleagues in Riverdale: the young man is a sociable and cheerful person.

The Riverdale star frequently posts new photos with colleagues and relatives on his Instagram page. Casey is open for his friends and fans.

In summer 2017, the singer Sabrina Carpenter presented an extract from her new music video “Why”; fans were pleased to see Casey Cott there.

In 2018, the actor extended his filmography and appeared in two projects: Instinct and All the Little Things We Kill.