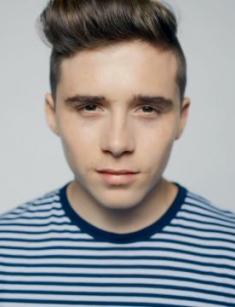 Talented and famous parents usually have special children. Among these, you can count the eldest son of David and Victoria Beckham – Brooklyn Beckham. At such a young age, the young man managed to work as an actor, model and even tried himself as a football player. But the guy chose his favorite hobby – photography.

Brooklyn Beckham was born on March 4, 1999, in London. Four months after the birth of the child, the parents officially got married. The boy was named after the area in which Victoria and David conceived the baby.

Since childhood, Brooklyn tried to be like his father. He dressed like David, was fond of football and even mastered a few complicated tricks. But most of all he liked David's tattoos: when he was eight years old, he got his first tattoo done, but, to the delight of his parents, it was only a temporary one.

By adolescence, this hobby has passed, because Brooklyn seriously got engaged in football. At the age of 12, the guy already played in an adult team and was considered one of the best players on the field.

In his free time, Brooklyn had a great time snowboarding and surfing. He grew up an ambitious young man, early began to work in a coffee shop to have money for pocket expenses because he did not want to ask his parents for it.

At the age of 15, the young man made his debut at the Arsenal club. Beckham even signed a contract with them for a year.

However, soon, Brooklyn's old passion for photography consumed all his free time, and it was over with football. He became interested in filming at the age of 14 when his father handed his son a camera. Beckham hasn't put it down since. Up till he was seventeen years old, his mother, Victoria Beckham and all the girls he knew acted as his models.

At the age of 17, he was entrusted to shoot an advertising campaign of Brit perfume by Burberry. However, the public was skeptical about the news, believing that his famous parents made the promotion of Brooklyn. The guy still develops his skill, not paying any attention to bad rumors. Pictures of Beckham regularly appear on the pages of popular social media.

After school, Brooklyn was assisted by several outstanding photographers. He was happy to work with each of them and learned a lot.

When he was 17 years old, Brooklyn Beckham tried his hand in modeling. The guy is properly built for this job: he is 5 feet 70 inches tall, and he weighs 154 pounds. He starred for the cover of Chinese Vogue and Korean Dazed & Confused.

According to the results of filming for the Korean gloss magazine, the guy got two covers: at first, he appeared in the image of a brutal guy with a carelessly tied tie, the theme of the second cover was sports chic. These shootings were not the first in Brooklyn's career - before that he participated in photo shoots for several brands, including Reserved.

Later, the young man admitted that he agreed on the job not to be a model but to be able to observe the work of photographers.

Brooklyn worked in the acting field. He appeared in the projects Entertainment Tonight, The Insider, Hell's Kitchen, David Beckham: Into the Unknown, and The Late Late Show with James Corden playing himself. And he also voiced one of the characters of the cartoon Metegol.

The love life of the young man is of great interest to Brooklyn's admirers. It's not easy to keep track of changes in the personal life of David Beckham's eldest son.

In 2014, Brooklyn Beckham began an affair with Chloë Grace Moretz, who was two years older than the young man. The couple did not announce the relationship. Brooklyn and Chloë assured everyone that the only thing that bound them together was friendship.

Then the press reported that Brooklyn was crazy about the artist Selena Gomez. He allegedly asked the girl to give him a chance. The singer graciously accepted the courtship of the young man but was not going to start a relationship with the young Beckham. She thought the guy was cute, but nothing more. As it turned out, because of flirting with Selena Brooklyn's relationship with Chloë fell apart.

The situation changed in the spring of 2016, when on the Internet there appeared a picture of Brooklyn hugging Chloë again. On a TV show, Moretz admitted that they were having an affair.

Before that, Beckham had already met with four older brothers and Chloë's mother, although he admitted that the acquaintance with the family of his loved one did not start that well. The Moretz brothers had a lot of questions for him; the guys were interested in the seriousness of Brooklyn's intentions. Over time, the relationship improved.

Fans called Brooklyn Beckham and Chloë Moretz a happy couple, waiting for news about the engagement. But instead, in September 2016, the lovers announced that they were breaking up.

It was a decision they made after the summer they spent together in Los Angeles. Brooklyn returned to London to finish school, and Chloë remained in Hollywood, where she starred in several projects. The couple did not announce the reasons for the breakup; the fans still believed that the lovers would reconcile because they had already got into a few fights.

In the fall of 2016, rumors spread that Brooklyn started going out with his long-time friend Sonia Ben Ammar. The young people had had an affair before when Brooklyn and Chloë were on a break.

However, in August 2017, to the delight of fans of the Beckham and Moretz couple, the lovers reunited again. They appeared together at a party in Los Angeles, and then the paparazzi caught the lovers when they were having a walk in New York. The problem because of which the couple broke up, was resolved: the guy went to New York College to learn the art of photography.

In November of the same year, the press reported that David Beckham's son had proposed to Chloë Moretz. His girlfriend appeared in a photo with a wedding ring. A letter "B" was engraved on the ring.

In March 2018, Brooklyn celebrated his birthday. The star family did not fail to congratulate their beloved son and brother on holiday. All his relatives, except for the younger sister Harper wrote kind words to Brooklyn in their profiles. Harper is just too young to have an Instagram account. One of the first ones to congratulate Brooklyn was his loved oned, Chloë Grace Moretz.

Brooklyn Beckham has a net worth of $1 million. In the summer of 2017, Brooklyn presented his debut photobook, which included 300 works of the aspiring photographer. The book consists of family pictures of David and Victoria Beckham, his brothers, Romeo and Cruz, as well as his sister Harper. At the same time, the young man had a meet-up with his admirers in three bookshops.

In early April 2018, the name of Brooklyn Beckham flashed on the covers of newspapers. The fact is that the guy was caught kissing with playboy model Lexi Wood. Fans of the guy were upset with the act of their idol and wrote him angry comments on Instagram.