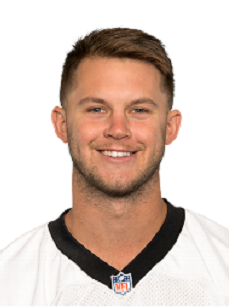 Kyle Allen is an American football quarterback for the team Carolina Panthers of the National Football League (NFL). He played college football for the Texas A&M Aggies and Houston Cougars.

As a kid, Allen Kyle starred in the 2012 NFL “Play 60” commercial that featured Cam Newton and a younger football fan (starring Allen) who wanted to take his job.

In September, 2014, he performed for the first time with the Aggies. Later the sportsman led the Aggies past the Tigers. He contributed greatly to putting A&M back in the Top 25.

The player completed the season with amazing results. He was given a bowl win and its MVP award.

In 2015, the player became the starter for the Aggies. Kyle was named the starting quarterback against Arizona State during the 2015 off-season. He performed in a match with a freshman Kyler Murray.

Allen also performed well and led the SEC in passing efficiency. In a game against Alabama the sportsman was highly productive. Before the following game, Allen started to play with the third team, after head coach Kevin Sumlin named Kyler Murray the starter.

Against Alabama, Allen got an injury: an AC sprain in his throwing shoulder. However, the player didn't want to miss games and told his coaches that he was ready to play against Ole Miss. Allen played his last game with the Aggies in November, 2015.

In December, 2015, the player spoke out that he was planning to move from Texas A&M. In January, 2016 announced, that he intended to transfer to the University of Houston. Allen began classes Allen at Houston on January 19, but was not eligible to play for the Cougars during the 2016 season due to NCAA transfer guidelines that require transfers to sit out an entire year.

Allen had a nice beginning of the 2017 season as the starting quarterback for the Houston Cougars. His first game was a 19–16 victory by the Cougars over the Arizona Wildcats on September 9, 2017.

Allen then was benched in favor of Kyle Postma during UH's third game Against Texas Tech after throwing 4 interceptions in 3 games. Kyle Allen, Josh Allen and Sam Darnold trained together during the draft process with quarterback guru Jordan Palmer. In January, 2018, Allen announced his decision to refuse to play in the final year of eligibility and declared for the 2018 NFL Draft.

On April 28, 2018, Allen signed with the Carolina Panthers as an undrafted free agent. He was waived on September 1, 2018 and was signed to the practice squad the next day. He was released on September 10, 2018. Allen was re-signed to the practice squad on October 30, 2018. On December 20, 2018, Allen was promoted to the active roster to back up Taylor Heinicke after starter Cam Newton was shut down for the season. On December 23, 2018, he made his NFL debut against the Atlanta Falcons in relief for an injured Heinicke going 4-of-4 with 38 yards in his two drives before Heinicke came back into the game at the two-minute warning of the first half. Allen would go on to make his first NFL start in the last game of the season against the New Orleans Saints. Allen suffered an injury early in the fourth quarter and was relieved by Garrett Gilbert.

In 2019, Allen made his first start of the season in week 3 against the Arizona Cardinals due to a foot injury by Cam Newton.

During the match when the Arizona Cardinals took on the Carolina Panthers at State Farm Stadium, the two teams were opponents in the field. But this match probably was known as the best friends game. Cardinals starting quarterback Kyler Murray and receiver Christian Kirk both have very close friends who play for the Panthers. For Arizona’s Kirk, he was reunited with former college teammate Kyle Allen, expected to start at quarterback for Carolina. Allen told Carolina reporters that the two are “best friends.” They played at different high schools — Kirk at Saguaro and Allen at Desert Mountain — before they both were teammates at Texas A&M. Allen grew up with Christian Kirk and they lived together during some time.

Due to the way Allen’s contract is constructed, Kyle owns $21 million.

Kyle Allen is not a married man, but there is information that he is dating Summer Juraszek. The couple shares their images on their social media accounts.

On his Instagram account, the player had over 53,000 of followers. He has a huge fan base of people who support the star and follow his success in sports. Kyle posts photos that depict his sports achievements, as well as moments that he shares with his significant other.

The sportsman gets his salary from his professional career. The net worth of a professional football player is estimated at around $495,000, as of 2019.