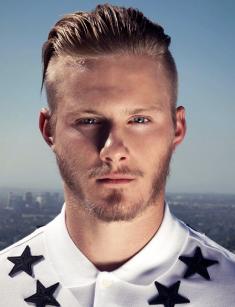 The life of Alexander Ludwig, as the lives of millions of his peers, has not been without Harry Potter. Even though this young wizard with a scar is a fictional character, his magic is very real. After all, all that is connected to this name, and everyone who has anything to do with this name, are just bound to success and good luck.

So creative biography of Alexander Ludwig began at the age of nine when he got a part in the advertising for toys-characters of Harry Potter, and from that moment he started moving forward in the film industry and show-business.

The blond, blue-eyed giant, Alexander Richard Ludwig, was born in the zodiac sign of Taurus, on May 7, 1992, in Vancouver, Canada's third largest city. The British newspaper, The Economist, gave the first place on "The World's Most Livable Cities" list to this metropolis three times, in 2005, 2007, and 2009. But, most likely, Alexander was provided with a prominent place in the show business not by the comfort and safety of the urban environment, but because of his artistic abilities, which he inherited from his mother, a former actress, and the connections of his father, who worked in the management of the Lions Gate Company, which produced films.

His parents, Sharlene and Harald-gave their eldest son (besides Alexander, the family has twins, Nicholas and Natalie, and a younger daughter, Sophia) appearance, which resembles the most attractive mixed features of German, Belgian, English and Scottish ancestors.

After getting a part in the advertising campaign of Harry Potter, for five years, from 2002 to 2007, Alexander gained experience in television projects, regularly appeared in films: Air Bud: World Pup, MXP: Most Xtreme Primate, The Sandlot: Heading Home, Scary Godmother: The Revenge of Jimmy.

2006 can be considered significant for the acting biography of Alexander: he starred in the TV project A Little Thing Called Murder and the science fiction drama television series based on the novel by Stephen King, The Dead Zone, and most importantly – got the part of the protagonist in the full-length film by 20th Century Fox The Seeker: The Dark Is Rising.

The film adaptation of the second book, popular among American teenagers, in the five-book fantasy series The Dark Is Rising by Susan Cooper, started in the wake of the resounding success of Harry Potter books and the epic The Fellowship of the Ring, did not pay off at the box office. The audience's attention was not captured by the story of the protagonist Will Stanton, the last remaining immortal fighter against the dark forces; Alexander Ludwig did not become as unbelievingly famous as Daniel Radcliffe. But perhaps now The Seeker: The Dark Is Rising is remembered only as the movie in which this popular actor starred.

In 2009, Alexander Ludwig reappeared on the Hollywood screens in a remake of Race to Witch Mountain as a boy named Seth. And again the film was a mix of genres-action, science fiction, thriller, and again it was about a boy with an abnormal origin-an alien from another planet with superpowers, who can travel in time, and again the character had a noble mission – to save everyone and everything from evil.

Naturally, the star of the movie was Dwayne "The Rock" Johnson, and the character of Sara, Seth's sister, was played by AnnaSophia Robb, widely known to the audience for her parts in such legendary movies as Charlie and the Chocolate Factory and The Reaping. Alexander Ludwig managed to impress the audience with his attractive appearance and professional acting. He was remembered.

The audience fell in love with him playing Cato, the cold-blooded, but the attractive killer in The Hunger Games. In this motion picture featuring world film stars Donald Sutherland, Woody Harrelson, and R&B star Lenny Kravitz, the young man, wanted to play the main character, Peeta. The state of the future arranges a fighting competition in which only the winner survives. Peeta and Katniss (Jennifer Lawrence), his secret love, have to participate in it. Even though he didn't get the part he originally wanted, Alexander Ludwig got something more significant out of this film - recognition.

In 2012, he was 20 years old, he had more than ten years of a successful career, he was no longer a young aspiring actor, but a professional, who was a theater major at the University of Southern California. He was a resident of Los Angeles, a singer who released his first song "Liv It Up," and finally, the owner of his first film award which he received in the nomination Choice Movie Villain of Teen Choice Award that airs on the Fox television network.

2013 added Lone Survivor to the actor's filmography, the movie that was listed as one of the best films of the year by The National Board of Review of Motion Pictures, got awards from the Screen Actors Guild and Writers Guild of America, and also was nominated for an Oscar for Best Sound Editing. The plot of the film touched upon the involvement of American troops in the Afghan military operation in 2005. Ben Foster, Eric Bana, Mark Wahlberg, Taylor Kitsch starred in the drama along with Alexander.

The movie Grown Ups 2 was also a part of Alexander's filmography, the film that got all the nominations and awards for the worst film of the year of the Golden Raspberry Awards. Other Hollywood stars, Salma Hayek, Adam Sandler, Kevin James, and Chris Rock shared these awards with Alexander Ludwig. Despite the negative reviews of film critics, the budget of the film paid off three times, which suited its producers.

Later on, the sports drama film When the Game Stands Tall about a school coach who led his football team to victory in one hundred and fifty games was released. The character of the coach, Bob Ladouceur, was played by Jim Caviezel. Alexander Ludwig appeared in the role of a running back, Chris Ryan.

Fortunately, 2014 was marked in the life of the actor by participation in the television series Vikings. This Canadian-Irish project in the genre of historical and adventure drama was directed for the History channel by Michael Hurst, who previously worked on the set of the famous film trilogy about Queen Elizabeth with Cate Blanchett as the leading actress, as well as on the set of The Tudors and The Borgias, two captivating historical fiction television series.

Alexander Ludwig got the part of Björn Ironside, the legendary and at the same time really existent character and it was Vikings that made the actor famous. Alexander in the character of a brutal, determined, irresistible, charismatic warrior played a role in making these series popular. For this part, in 2015, the actor was nominated for the annual Canadian television award Golden Maple Awards for Best Actor in a TV Series Broadcast in the U.S.

2015 brought the young actor a lot of work, and what was even better, this work was diverse. In addition to continued filming of the Vikings, in which, according to the nature of his character, Alexander Ludwig played vividly and boldly, he starred in the thriller film Blackway. In this movie, he attempted to shine on the big screen not just as a mountain of muscles, and so he paid more attention to the fine details in the image of his character.

The film told the story of a girl, who after graduating returned to her hometown, where a mentally unstable man starts stalking her. Along with two friends, she is forced to fight back the criminal. Together with Alexander Ludwig, in the film played Anthony Hopkins, Julia Stiles, and Ray Liotta.

The movie The Final Girls was a mix of comedy and thriller, and Ludwig on the verge of these different genres became a great partner of young actresses Taissa Farmiga and Nina Dobrev. And finally, in the film Final Girl with Abigail Breslin as the leading actress Alexander Ludwig played a classic villain, a charming psychopath, the leader of the gang which enjoys killing girls.

And yet today Vikings remains the main project for the actor. 2016 was devoted to filming the fifth season of this series. Alexander's character grows up, becomes tougher and more ruthless. Now his character gets more screen time, especially since the number of episodes in this season of the TV series has doubled.

Alexander Ludwig is famous, talented, successful; he is a blond with piercing blue eyes, his height is 6 foot 1, he has a strong and at the same time slender body. He weighs less than 194 pounds. In general, he is a very handsome man. No wonder such glossy magazine as Vogue, VMAN, and Flaunt invite him to star in fashion photoshoots. However, it is not clear what impresses the readers in these shots more-designer clothes from Lanvin, Versace, Diesel or his torso without a bit of fat.

Of course, the personal life of Alexander attracts much interest of the public, especially since the young man doesn't like to speak about it. He is said to have had affairs with almost all the partners from the films that he starred in. Among his girlfriends are listed AnnaSophia Robb, Nina Dobrev, Isabelle Fuhrman, Leven Rambin and even Katheryn Winnick, a Canadian actress of Ukrainian origin, who plays the character of Björn Ironside's mother in the Vikings, she is older than Ludwig for 15 years.

The actor was seen in the company of American skier and Olympic champion Lindsey Vonn. At the same time, all the ladies claim that the only thing that binds them together with Ludwig is friendship, and perhaps only the American model Nicole (Marie) Pedra appears in the media and on the Internet as the ex-girlfriend of the actor.

In the last photos posted by Alexander on Instagram, he looks happy next to the beauty, whose name is Kristy Dawn Dinsmore, and to whom on February 14 he wrote the following: "Happy Valentine's day, honey! I'm crazy about you!" The relationship of the young people is only getting started, which is evident from the joint photos, including those on Twitter, in which the loving couple appears together. The girl is also an actress; she has already made her debut in the television series Supernatural and the movie Storm Warning.

In addition to Hollywood blockbusters and the next seasons of the Vikings, Alexander Ludwig stars in national projects. An example of this was the TV series Swerve, which was released in 2017. It is a comedy action web series about an ordinary limo driver getting into ridiculous situations. Alexander plays the main character in the movie. One season of the show was released on the Canadian TV so far.

Now the actor is playing in the American film Peace, the plot of which is based on the real events of World War II. Four soldiers from the United States storm the mountains of Italy, but the situation gets complicated after bumping into the sergeant-killer. Alexander Ludwig is again in the main cast of the movie. Lochlyn Munro and Franco Nero will also play in this film.