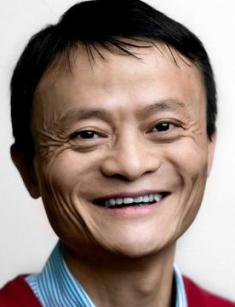 The success story of Chinese billionaire Jack Ma would be very much like a fairy tale if it weren't all true. Fifteen years ago, Ma was a modest teacher with a salary of $ 15 per month, and today he is the "father" of the Internet Empire Alibaba Group, whose size is estimated at $ 29.7 billion. In 2013, The Financial Times called the businessman Person of the Year.

Ma Yun was born in 1964 in Hangzhou in a family of poor musicians. Parents could not give their son the starting capital. Besides, the little one came to this world during tough times, the period of the Cultural Revolution that was inspired by Mao Zedong. The revolutionary repressions had a direct influence on the opposition and intellectuals. In the case of Ma Yun's family, everyone was in disgrace: his grandparents were members of the Nationalist party, as well as his parents.

After Richard Nixon's visit to Yun's hometown, Huangzhou became a tourist Mecca. Ma saw this as a way to earn pocket money and learn English for free. The teenager went to a hotel early in the morning, where he offered foreigners free and mutually beneficial excursions. Tourists called Ma Yun "Jack" to make it easier to pronounce and remember. The name stuck, it was then that the Chinese boy turned into Jack Ma.

Even though the guy had an evident success in learning English, he did not do well at school. As the Chinese entrepreneur admitted in an interview to the American journalist Charlie Rose, he failed the tests twice in primary school and three times in secondary school. Two times Ma failed at his college exams, and when he finally graduated, he got rejections from all employers.

In 1988, after graduating from the local University, Jack was hired as a teacher with a monthly salary of $12-15. But Jack was not discouraged: He applied for admission to Harvard University ten times and was rejected every single time. After receiving the 10th refusal, Jack said that the time would come when he would be invited to teach at Harvard.

In the early 1990s, Jack Ma went in search of a profitable job but knocked on all the doors in vain. Even in the fast-food chain KFC, Ma could not get a job. Furthermore, he was the only one of the 24 applicants who wasn't hired even as an Assistant Manager. Jack is confident that the KFC managers did not like his appearance and short height.

Jack Ma made his first steps in the industry in the early 1990s: the young teacher founded the translation agency Haibo, which could not bring any profit for three years. His partners lost all their hopes, seeing that the cost of renting an office exceeded the income of the first working month three times. But Ma did not even consider giving up: to support the business, he sold souvenirs, clothes, and consumer goods.

Three years later, Haibo brought the first profit without a penny of foreign investment. Today it is the largest organization in Hangzhou that provides translation services.

Jack Ma had no experience in working using a computer and had no idea about programming. For the first time, the entrepreneur faced the Internet in America, where he worked in 1995 with the Chinese delegation as an interpreter. Having typed "beer," Jack did not see the results of the desired drink of Chinese production. The Yahoo! searcher did not contain any information about China. That was the moment when he got the idea to establish an Internet company on his return home.

In Seattle, Jack Ma posted advertising for Hybo on a website and realized how effective it was. In two hours, the Chinese translation agency received six offers from America, Japan, and Germany.

Returning from the United States, Jack founded a second business project to create websites, calling it "Chinese Yellow Pages." There was no money to rent the place, so Ma established the office in his own apartment. He secured the starting budget, $2 thousand, with the help of his wife and a friend.

Analysts said that the project would fail: it took 2-3 hours to load one page of the website. In three years, the second brainchild of Jack Ma brought good fruit: the profit exceeded $800 thousand. In the late 1990s, Jack Ma was entrusted with the management of the international e-Commerce center – a division of The Ministry of Commerce of the People's Republic of China. The businessman learned a lesson from experience in civil service:

Ma characterized his relationship with the Chinese government this way:

"As always, be in love with them, but don’t marry them."

In 1999, 14 months later, Jack Ma left the government structure and founded the Alibaba Group company with like-minded people- a trading platform for small and medium-sized enterprises. Jack got the inspiration for the name of the resource from the Eastern tale of the leader of forty robbers, who knew the "code word" for access to the cave with countless treasures. This is a corporate version of the name; the pragmatic one is – "Ali Baba," which is easy to pronounce in all languages.

In early 2000, the brainchild of Jack Ma won $25 million through investment, but it did not lead to any profit. Then the company came up with a system that helped Chinese exporters find customers in America. In 2002, Alibaba received its first profit – $ 1, after which the revenue rushed up. In 10 years, the company's income exceeded a trillion yuan, a year later, in 2013, Jack left the presidency, remaining to be the chairman of the Board of Directors.

In 2014, Alibaba held an IPO and placed shares on the New York stock exchange, planning to attract $1 billion of investment, but the reality exceeded dreams: Jack Ma's company raised $ 25 billion. Was Jack Ma happy with the victory? Yes and no. The saying of the Chinese billionaire spread all other the media:

Jack Ma's speech at the international economic forum in St. Petersburg was full of shocking statements. The billionaire, who founded a mega-successful company, said that the creation of Alibaba Group was his main mistake. He dreamed of small business and built a giant that required responsibility and brought a lot of problems that were like those that presidents of states had to deal with.

Jack Ma said if there was a next life, he would never do business as big as Alibaba,

"I want to be myself, and I want to enjoy my life."

Today, under the control of Alibaba Group are 80% of China's e-Commerce. Two-thirds of purchases are paid through Alipay, the annual turnover of which reaches $148 billion. In the country, the company of Jack Ma develops six shopping sites and owns a Chinese hybrid of Facebook called Weibo, the monthly audience of which 156.5 million users.

The Corporation manages a dozen organizations, among them the film company, Alibaba Pictures, an online store, AliExpress.com, an online auction Taobao.com, as well as a platform for online payments Alipay.

The online store "Aliexpress" began functioning in 2010, and in 2016 it opened in all Europe countries. The resource is intended for the sale of Chinese goods abroad. In 2009 and 2014, Jack Ma entered the list of TOP 100 most influential people in the world.

It is impossible to find information about the height and weight of the Chinese billionaire who created the business Empire. As can be seen from the photos, Jack Ma is no Apollo. But his wife, Zhang Ying, managed to see in the former classmate one thing that mattered:

"He's capable of doing things that handsome men could not do."

They married in the late 1980s and had a son and daughter. Until 2002, Zhang Ying was in the top management of the company, but in 2002, Jack courageously told his wife that children need her more than the company. The woman was shocked, but she decided that it was the right decision and devoted herself entirely to the family.

According to Jack Ma, his spouse can push him to new victories as no one else ever could. Two years after the launch of Alibaba, she asked how much the company earned. Ma said: "1 million yuan ($160 000)". On the face of his beloved, there appeared a grimace of frustration. Then the husband added: "Per day." His wife's face lit up with a smile, and Jack spread his wings.

The billionaire is a great dad. He advises his son not to strive to get into the top three students but to be an average kid. The main thing is not to slip into losers. Jack Ma is sure that for development and creativity, the child needs free time from lessons. Concerning traditional education,

"it's stuck in the past and is still preparing students to work on the factory."

Jack Ma's net worth is estimated at $35.6 billion. In October 2017, the billionaire visited Moscow State University, where he advised how to build a career at a meeting with students of physics faculty. The Chinese man is convinced that soon, the driving force of the market will be the service industry, not the producing sector.

Jack Ma does not believe in Donald Trump's promise to make America great again by focusing on production and does not see the future in China's advanced program Made in China.

"The future will be about 'made on the internet' and not labels like 'made in China' or 'made in America',"-said Ma.

The books of the Chinese star are sold out at the speed of light. Never Give Up: The Story of AliExpress

In 2017, Jack Ma appeared on the screen. The billionaire starred in the action kung fu short movie by Jet Lee Gong Shou Dao. Ma posted the photo from the premiere of the film on his official page in Weibo. Donnie Yen and Wu Jing, the stars of the Asian television, participated in the shooting of the short film.

In November 2014, experts estimated Jack Ma's fortune at $ 32.7 billion, which brought the businessman to the top level of the wealthiest Chinese people and the 18th place in the world ranking.

In the same year, Forbes Magazine put Jack on the 30th place in the list of "the most powerful people of China." The founder of the "Alibaba" Empire was the first Chinese entrepreneur, who found himself on the cover of Forbes Magazine.

"What starting your company means: you will lose your stable income, your right to apply for a leave of absence, and your right to get a bonus."

"It’s easier to unite the company under a common goal rather than uniting the company around a particular person. It’s impossible to convince every employee or investor to trust your decisions. If your team is working for one goal, the company will have a clearer direction."

"Prepare your replacement. Reduce the dependence of your team on you — teach your employees the skills that you have, teach them what you know yourself. Over time, you will be able to shift a significant part of your responsibilities to the team and do other projects."

"A leader should never compare his technical skills with his employee’s. Your employee should have superior technical skills than you. If he doesn’t, it means you have hired the wrong person."

"Your attitude determines your altitude."

"You should find someone who has complementary skills to start a company. You shouldn’t necessarily look for someone successful. Find the right people, not the best people."

"I always tell myself that we are born here not to work, but to enjoy life. We are here to make things better for one another, and not to work. If you are spending your whole life working, you will certainly regret it. No matter how successful you are in your career, you must always remember that we are here to live. If you keep yourself busy working, you will surely regret it."

"If you don't give up, you still have a chance. Giving up is the greatest failure."