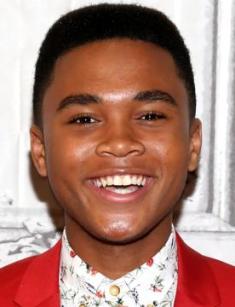 Chosen Jacobs is a young American actor who participated in the TV series Hawaii Five-0 and the horror It based on Stephen King’s novel.

The would-be artist was born in Springfield on July 3, 2001. He has a sister, Dasia. The boy showed his talents early; the parents took their son to an opera choir at the age of six.

The singer performed on local stages; the choir began to tour in the United States and abroad later. When Chosen turned ten, he debuted in the theater and appeared in The King and I, Into the Woods, and Hairspray.

At 13, Chosen realized he had reached everything he could in Springfield and moved to Los Angeles with his mother and sister. The young man loved the audience, and this feeling was mutual. Jacobs often performed in cafes, played the piano and guitar, and sang to his music.

Besides, the young talent started creating music; he plans to record an album with his tracks in the future.

While the artist dreamed of participating in a superhero movie or personify Muhammad Ali, he was offered a part in the series Hawaii Five-0. It is the story about several detectives who create a unique department that saves the island from criminals.

Jacobs joined the sixth season in 2016 and played the son of Lou Grover (Chi McBride). The young man grows up along with other characters and even dates Grace (Teilor Grubbs), the daughter of Danny Williams (Scott Caan).

The same year, Chosen was invited to the short movie Remnants; he collaborated with Tammy Garrett, Andrew Fox, and Madison Mae. Although this project brought the Endless Mountains Award for Best Supporting Actor in a Movie, it did not make the Springfield teenager a star.

Fame came in 2017 when Chosen joined the cast of the movie It, the screen adaptation of Stephen King’s popular book. As the story runs, a small town is shaken by the terrible news every 27 years: little children are missing. Adults do not even try to prevent crimes or find the abuser. One day, the tragedy touches Bill Denbrough (Jaeden Lieberher): his younger brother, George (Jackson Robert Scott), is gone.

The teenager gathers together his friends to find the boy, but things are not that simple: the clown Pennywise is involved in kidnapping and murders: he takes children to the sewer. The young people cannot handle the unusual criminal alone and ask their classmates for help. Chosen Jacobs played the home-schooled boy, Mike Hanlon.

2017 was also marked with the series American Woman; the artist was given the role of William in the seventh episode of the first season.

There is no information about the actor’s romances. However, the model Lily Chee is his good friend.

The actor often shares pictures on Instagram with his friends: they work on movies or hang out together.

Young Jacobs views charity as a significant part of his life: he feeds homeless and gladly spends time with disabled children.

Today, the actor is actively developing his career. He played Wendell Deaver in the series Castle Rock in 2018 and continues to work on Hawaii Five-0. 2019 will bring the premiere of the second part of the horror It; fans are looking forward to it.