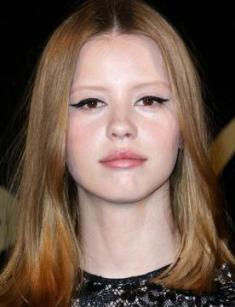 Many artists who have no standard beauty become successful; the British model and actress Mia Goth is one of them. The audience knows her for the roles in Lars von Trier’s Nymphomaniac and Gore Verbinski’s psychological thriller A Cure for Wellness.

Mia Gypsy Mello da Silva Goth was born in London on November 30, 1993. The family moved from England to Brazil when she was little. The girl’s grandparents from the maternal side influenced her life more than her parents.

The American grandfather, Lee Jaffe, was a painter and musician, and the Brazilian grandmother, Maria Gladys, worked as an actress; they introduced their grandchild to art. Maria, the star of the series Hilda Furacão and India – A Love Story, often took Mia to movie sets, and the future celebrity realized what she would like to do.

Further on, the family left Brazil for Canada; Mia lived in a ranch according to her parents’ will. The girl frequently moved: she changed seven schools within 12 years and lived in several countries. As a result, the young talent learned how to be communicative and adaptable to the changing environment.

As soon as 12-year-old Mia returned to London, the dreams about fame bubbled to the surface again. Soon, a representative of the modeling agency Storm Model in Chelsea, London noticed the 14-year-old girl and her unusual appearance.

The actresses debuted in cinematography at 20: she got a small role of Sophie Campbell in the detective series The Tunnel (summer 2013). Mia participated in three episodes, but that was enough for movie makers to remember the artist.

The next year was marked with short works. Mia participated in Shia LaBeouf’s short music video “Future Unlimited: Haunted Love” with the American opera and pop singer David Miller. She also played a woman in an episode of the short thriller Magpie by Stephen Fingleton.

In 2015, Fingleton was looking for actors for his new project, the drama thriller The Survivalist. Young and charming, Mia was the best candidate for the role of Milja; it was the first significant part in the artist’s career that gave her the nomination for British Independent Film Award for Most Promising Newcomer.

Besides, Mia worked on Baltasar Kormákur’s adventure movie Everest based on a true story that happened in 1996: the tragic death of five persons climbing the highest mountain in the world. The movie opened the Venice Film Festival in September 2015.

Following the success, Mia came back to the series and took part in the detective Wallander; she played Hanna Helmqvist.

The would-be spouses participated in adult scenes. The next four years, they kept breaking up and reuniting, and fans were watching them closely. Mia and Shia often had public conflicts and even had a fight in front of cameras. Despite these storm-like emotions, the couple decided to marry.

The wedding ceremony was held in October 2016 in Las Vegas; a double of Elvis Presley hosted the event. The actors posted their pictures on Instagram; they looked happy and full of new hopes.

In 2017, Mia Goth received the next significant part in her career: she played Hannah von Reichmerl in Gore Verbinski’s psychological thriller. Dane DeHaan, the star of The Amazing Spider-Man 2 and Valerian and the City of a Thousand Planets, collaborated with her. Although critics’ reviews were ambiguous, they appreciated Goth’s talent and unique appearance.

November 2017 was marked with the premiere of the horror Marrowbone; Mia personified the main character, Jane Marrowbone. Soon, another horror, Suspiria, was released. In 2017-2018, the actress worked on the drama High Life with Robert Pattinson.

Soon, fans will have new opportunities to enjoy their favorite’s talent: the movies The Devil All the Time and Emma are coming.