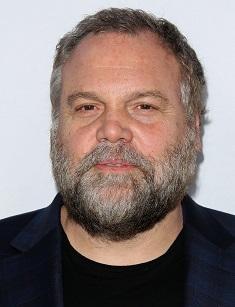 Vincent Philip D'Onofrio is an American director and actor who appeared in various movies and TV shows. His most known roles are Pvt. Leonard Lawrence in Full Metal Jacket (1987), Detective Robert Goren in Law & Order: Criminal Intent, and Vic Hoskins in Jurassic World (2015).

Vincent D'Onofrio was born in New York City in 1959. His parents were Gennaro and Phyllis D'Onofrio. Vincent is the youngest child in his family; he has two older siblings, Elizabeth and Antoinette. Elizabeth D'Onofrio is also occupied in the same sphere as her brother; she is a film director and actress. Vincent used to live in Hawaii and Colorado, but when the parents got divorced, and his mother married another man, they moved to Florida.

By the way, Vincent’s father was a theater-production assistant. In his teens, D'Onofrio worked in the field of sound production at some theaters which were run by his father Gennaro D'Onofrio. Besides, Vincent was interested in magic as a kid. He used to go to the small magic shop owned by Cuban entertainers who taught the little boy to do some tricks.

Speaking about his education, D'Onofrio graduated from the Hialeah-Miami Lakes Senior High School.

After high school, Vincent has worked at the University of Colorado, where he has been involved in some small theater productions. Later, he attended acting classes at the American Stanislavsky Theater and the Actors Studio. Eventually, he got his paid debut role in the off-Broadway's play This Property Is Condemned. D'Onofrio continued performing in various New York University student productions, and, at the same time, he worked as a deliveryman, a bouncer at the Hard Rock Café and a bodyguard for such celebrities as Robert Plant and Yul Brynner.

In 1984, Vincent had his Broadway debut in the play Open Admissions as Nick Rizzoli. In 1986, he took the role of Pvt. Leonard Lawrence in the film Full Metal Jacket. This project is considered to be a defining moment in Vincent’s acting career. For this role, D'Onofrio needed a weight gain, and he gained 70 lb (32 kg) which brought his weight to 280 lb (130 kg), that is a record for the weight gained by an actor for a movie. After that, Vincent has been nominated for the New York Film Critics Circle Award in the category “Best Supporting Actor."

In 1987, Vincent played the role of Dawson in the popular comedy Adventures in Babysitting. The actor had blond hair then, and in some part of the film, he was taken as Thor.

In next years, D'Onofrio continued playing various supporting roles such as farmer Edgar in the Men in Black (1997), serial killer Carl Stargher in The Cell (2000), etc. In 1997, the actor appeared in the television series Homicide: Life on the Street and got an Emmy nomination for this role.

Since 2001, Vincent has been starring in the NBC/USA Network series Law & Order: Criminal Intent as Det. Robert Goren, which is perhaps his most famous role. In 2010, he left the show and was replaced by Jeff Goldblum. However, after a drop in ratings, D'Onofrio and Kathryn Erbe both agreed to return for the final, 10th, season.

In 2005, Vincent won the award as the Best Actor at the Stockholm International Film Festival for his role of Mike Cobb in the film Thumbsucker (2005). In 2011, the actor started to work on his leading role of a serial killer Bob in Jennifer Lynch’s film Chained. Also that year, it was announced that Vincent would be a part of the new NBC show, Blue Tilt, together with Ethan Hawke. D'Onofrio and Hawke had worked together previously in the films such as The Newton Boys (1998), Sinister (2012), etc. However, the NBC project was shelved due to the lack of attracted viewers.

In 2013, Vincent appeared in the Escape Plan among Sylvester Stallone and Arnold Schwarzenegger. Next year, the actor starred in the drama The Judge. In 2015, D'Onofrio had his first appearance in the Marvel Cinematic Universe in the first season of Daredevil as Wilson Fisk/ Kingpin. He returned to this role in the next two seasons.

In 2019, D'Onofrio was included on the People With Money’s list of top 10 highest-paid actors. He has an estimated net worth of $96 million.

Apart from acting, Vincent has also found his place behind the camera. He worked on The Whole Wide World (1996) and Guy (1997) as a producer. In 2005, he was both a director and actor in the short film Five Minutes, Mr. Welles. In this project, D'Onofrio represented his desire to improve his performance as Orson Welles in Tim Burton’s movie Ed Wood (1994). This film became Vincent’s answer to the critics and himself.

In the early 1990s, D'Onofrio has been dating an actress, Greta Scacchi, who was his colleague and played together with him in some movies, including The Player (1992) and Fires Within (1991). In 1992, their daughter Leila was born. Then, the couple split.

In 1997, Vincent married Carin van der Donk, a Dutch model, with whom he has two children. In 1999, the spouses had their first son, Elias Gene. After that, in the early 2000s, Vincent broke up with his wife, but soon they got reunited and had their second son born in 2008. By the way, in some internet sources, it is wrongly said that D'Onofrio is not currently married. However, in his interview in 2012, the director shared his frustration about this because he was married and lived with his family in the neighborhood of Manhattan.

Speaking about the actor's health, there are some issues. In 2004, he collapsed during the shooting of Law & Order: Criminal Intent. Later, it happened again at his home. After testing, D'Onofrio was diagnosed with emotional exhaustion. It was suggested that exhaustion came up after Vincent's hard work at the Criminal Intent and his short film Five Minutes, Mr. Welles at the same time.

It was not the first time when Vincent had this kind of problems. In the past, he discussed his personal struggles with depression and anxiety. D'Onofrio is very sensible when it comes to mental issues. One of his young Twitter followers twitted him that “mental health is a racket for doctors to make money of society." The director answered in a rather rude style, saying that this person needed to smarten up and that mental illness was a problem that families fought on a daily basis during their lives.