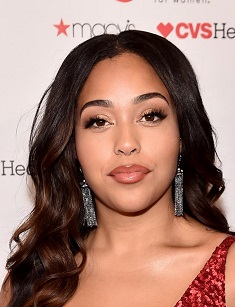 Jordyn Woods is a young 21-year old model who is famous by the magnificent body with an unusual size. She also is a successful, famous social media star and a friend of Kylie Jenner. Jordyn is a famous model of big size among the other ones in the USA, who supports body positive. Often in an interview, she raises such topics as self-love and self-esteem. She starred for lots of famous brands. Jordyn has got a very big amount of fans almost everywhere. Her Instagram account totals 5 million followers. This fact makes her one very successful among Instagram celebrities. She has also created a YouTube account of the same name.

Jordyn Woods was born on September 23, 1997, in Los Angeles, California, USA. She lived together with her parents - mother named Elizabeth Woods, who works as a professional photographer, and dad named John Woods. There is no information about his profession or social status.

In her childhood, Jordyn was familiar with the brilliance and charm of the entertaining and fashion industry, which prompted her to start a career of a model. She was fascinated by posing for the camera at the age of six. She left her native city and arrived at Calabasas city at the age of 13 to get an education. In her new homeland, she met with Kylie Jenner. This meeting was a crucial time in the life of a young teenager. Girls were spending a lot of time together, and then and at all have become best friends. At that time, Kylie was already famous. And Jordyn's career took off and rose up with an enormous speed

Also, Kylie gave Jordyn huge support. Not so long ago, Jordan received the sad news: the girl's father died due to cancer. After his death, the Woods was going through a really hard time — they had large debts, a lot of money was spent on the treatment of her father. Kylie helped her friend not only morally, but also financially. She donated the Woods family $10 thousand. Only for the friend, Kylie Jenner wanted to collect $50 thousand. Therefore, she began to raise money through donations.

For Jordyn’s support, Jenner posted on the Instagram photo which depicted Jordyn and her father. "Help and pray for Jordyn and her family," the star asked her 84.2 million subscribers. "I love you very much. I’m with you. When you're crying, I'm crying too."

Jordyn first got fame as a social media celebrity when she decided to create her Vine account. She started to publish interesting videos and succeed to gain an impressive number of subscribers. After this success, she wanted something more and created her Instagram account, which currently collected more than 5 million people who followed her. Her amazing photos were immediately taken by the public, and she began to become a celebrity.

She also has great fame on Twitter, and the number of subscribers exceeded about 200,000.

Later, her popularity in social networks has increased to new heights. Jordyn has got an increasing net worth. She became a source of inspiration for many women, when she did not hesitate of her body, began to present to people that a model can be nice and sexy in any body. Body positive nowadays is the brightest and at the same time the most controversial trend of recent years in the beauty sphere. The idea that it is better to love yourself in your body than to be beautiful, but unhappy, looks natural, and model actively supports it. Her weight is 68 kg with a height of 175 cm, body parameters: 102-86-119. She boldly stares in a bikini and shows that she isn’t shy of her body, but on the contrary, loves it and likes herself. Although the rumors said that the model was shot even nude, which only reinforces her confidence in her body, some photos were criticized many times, but the model did not stop and continued to do her work. According to her words, models of big forms should be considered as any other models. And all women are beautiful in their way.

She has eventually got work in Lovesick, a new brand of clothing line created for larger women from every country in the world. Model mentions that "Lovesick" provides fashionable clothes for women of large size so that they can feel comfortable.

But this successful career of Jordyn Woods isn’t limited. The girl has released a new line of plus size clothing for Boohoo.com.

"Soon the brand will be able to boast of clothes of large sizes, the creation of which I was inspired by my best friends, including Kylie," —says Jordyn not without pride.

The young model is supported not only by stars but also by fans. They often write in the Jordyn’ s Instagram about how hard her work is, how kind heart she has, how she inspires them and makes them understand that they are beautiful and unique in any form and size of their body.

"Her story gives us confidence," - they say.

However, later, the plump model Jordyn Woods had a harsh criticism from by fans, who accused the girl of starting to rapid weight loss. Woods said the harassment against her has been going on for several months.

Network users are angry at the girl for not having carried the beauty of the real female body to the masses but have become similar to dystrophic models that promote unhealthy leanness.

Jordyn Woods disagreed with the fans and said that she has the right to do whatever she wants with her body. The model also claims that it is not afraid of losing a job, as it can earn a living in other ways.

Her connection with the celebrities strengthened during the period when Kylie was pregnant. She also communicates perfectly with her friend's family and was even invited to the wedding of Kanye West and Kim Kardashian. She was even hired as an actress for one of the Kanye West projects.

Jordyn has also become good acquaintances with Jaden Smith and has warm relations with her father, Will Smith. She sometimes calls Mr. Smith "Uncle Willie." Jordyn said that a man who influenced her life very much.

Jordyn is also passionate about the tattoo industry. She often draws temporary tattoos on her body for new photos. Her brother works as an experienced tattoo master and often draws sketches and ink tattoos for her, for which she is very grateful to him.

She has a younger sister named Jody, and they are like close friends.

What is happening in Jordyn’s life now?

Jordyn Woods and Kylie Jenner are not only best friends but colleagues. The girls created their own line of cosmetics called «Jordyn Woods x Kylie Cosmetics», which the girls wanted to start sailing in July.

Kylie wrote that the new production will appear next month, an advertising campaign has just taken place. Photos from the shootings have already appeared on the network, and the idea, style of shooting and appearance of the girls were appreciated by a considerable number of people. Kylie invited Jordyn to work on it together with her. Jordyn also said that the idea of a joint collection visited them with Kylie for a long time, and now, finally, the plans were destined to become a reality. Collection items are still kept in secret.

She, in addition, helped the husband of Kim, Kanye West, to advertise his new collection.

But just in one moment of the other day, a strong relationship of girls broke up.

In February 2019, scandalous rumours have spread on the internet: they say about the romance of Jordyn and Tristan Thompson, Khloe Kardashian's boyfriend.

The scandal broke out after one of the parties on February 17, where Jordyn Woods was noticed in the arms of Tristan Thompson, who was the boyfriend of his younger sister Kim Kardashian named Khloe. The controversial video floated out and fell into the hands of Khloe.

All this taken together again gave the Internet detectives a reason for the versions that the couple has big problems in the relationship. Not even the fact that on Valentine's Day Thompson sent Khloe gorgeous bouquets of roses – he did not come to her. However, just two days later, he flew to Los Angeles, where his girlfriend lives, but did not go to her, but to a friendly party at a nightclub, where he "lit" until Sunday morning, writes the Daily Mail.

She decided not to forgive new betrayal. According to foreign media, the couple broke up.

Jordyn recently decided to break the silence and wanted to justify these rumours about her romantic affair. The girl said that she saw Tristan more than a year ago, but the video from the party appeared in the hands of Khloe just now. Chloe herself did not respond to her sister's ex-girlfriend, who turned out to be the mistress of her boyfriend.

Also, Jordin claims that he does not remember how she ended up at the party, where she was hugged by the arms of her boyfriend Kardashian. This, in turn, explains her insistence on denying the fact of adultery with a Canadian athlete.

In this case, Jordyn Woods is not going to look for an excuse but simply wants to bring some clarity to the situation. The model does not give up trying to contact with Kylie and her sister Khloe Kardashian to beg their forgiveness.

As noted by the publication Hollywood Life, woods all in tears trying to call Khloe and Kylie, but they do not get in touch. Nevertheless, she is trying to get back their friendship and warm relations.