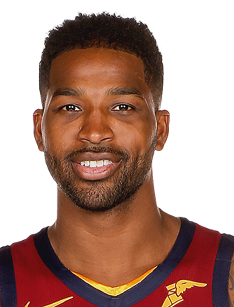 Tristan is a Canadian born professional basketball player, who stands for the team of the National Basketball Association "Cleveland Cavaliers". He plays the position as a heavy forward and center. Player has a popular off-the-hook talent. He was selected for the fourth number in the 2011 during NBA Draft. However, this guy so well-known in media circles not only for a basketball career reason. Khloe Kardashian, a member of the most famous family, is dating with him. Obviously, providing that around Tristan is always a lot of media publicity, his name usually appears on different popular media web sites. The stars behavior is not so pleasant as it could be. Despite several troubles in relationship, now the couple has beautiful two kids.

The NBA star was born Tristan Trevor James Thompson on March 13, 1991, in Toronto, Ontario. His parents are Trevor and Andrea Thompson. Both his parents were athletic. His mother, Andrea, ran track, and his father, Trevor, played soccer. He has three younger brothers, Amari, Daniel and Deshawn.

Thompson went to high school in his native Brampton, in his first year of study he had already declared himself as a promising basketball player. Three American universities, Florida, Kansas and Texas, offered Thompson a scholarship in advance, and from three offers he chose Texas. In his second year of studies, Tristan transferred to St. Benedict’s Preparatory School in Newark, New Jersey. There he spent a year and a half, becoming one of the most promising basketball players among US students. Due to some major disagreements with the team’s coach (Dan Hurley) he transferred to the Findlay school in Henderson, Nevada, where he studied for another year and a half. The basketball star maintained his excellent form and continued playing as one of the most promising recruits. In the senior class, Tristan was included in the symbolic team of the school championship according to McDonald's.

Thompson entered the University of Texas at Austin in 2010 and spent one season playing for the university basketball team. He immediately got a place in the five freshmen of the team and averaged 13.1 points per game of the student championship, made 7.8 rebounds and 2.4 blokshot. At the end of the season, he was recognized as the best newcomer of the Big 12 conference, entered the national teams of newcomers, defending players and the second national team of the conference, and also included in the newcomers team of the student championship according to USBWA journalists. In 2011, after a successful first season with the Longhorns, Thompson made his decision to give up his 3 years education in college and enter the NBA draft. However, he finished the education later during the 2011 NBA lockout.

On June 23, 2011, Thompson was selected in the NBA draft under number four by the Cleveland Cavaliers team. On December 9, 2011, before the start of pre-season fees, Thompson signed an initial four-year contract with Cavaliers, in which his salary will amount to $ 16.65 million. His debut in the NBA took place on December 26, 2011 in the game against the Toronto Raptors, in which he spent 17 minutes on the court. He scored 12 points and made 5 rebounds too.

Thompson was a lucky player during the 2011-12 season. He made history as the first player of Canadian who received All-Rookie team respects in the NBA. Having proven his talent in debut year, he was given much more playing time as he started. Despite growing his career, Thompson’s time on the court was suddenly reduced in the 2014-15 season due to in the Cavaliers started to lead LeBron James and Kevin Love. He played 15 games and came off the bench for the greater part of the season.

His career was partly suspended. Thompson renewed his contract with the Cavaliers in October 2015 and went on to help the team win the 2016 NBA championship title, their first in 52 years. On December 26, 2016, Tristan Thompson played his 400th successive regular-season game and made history as the first NBA player who did it. The 2016 NBA Champion distinguished itself by Tristan’s injure. His left foot was a little sore and swollen.

“I just fell forward on it, it’ll be all right,” Thompson said. “It happens when you’re rebounding and the little guys are down there. It’s part of the game. I’m just glad I was able to walk off on my own two feet.”

Thompson represented Canada at the FIBA America's Under-18 Championship in 2008, where his team won bronze medals. Once again, the basketballer played for the national team at the FIBA U-19 World Championships in Auckland, New Zealand, along with his friend and partner in the university team, NBA player Cory Joseph. Now his net worth as a basketball player is around 8 million dollars.

Tristan took part in the show «Married at first sight» where he was looking for a girlfriend. Mia Bally won the show and then they continued their relationships. Bit it was not so long, his new wife was arrested. So Tristan’s trust had been broken. Tristan’s life is an extremely confusing. Even his two children are from different woman. The first baby momma is Jordan Craig.

Now she is his ex-girlfriend. The NBA star dated with her for a while and On December 12, 2016, he welcomed his son, who was called Prince Oliver Thompson. On April 12, 2018, Thompson welcomed his second child, a daughter named True Thompson. But God doesn’t always give with both hands.

During Khloe’s pregnancy some gossips about her boyfriend cheating were appeared. The cheating allegations were however overshadowed because of the child birth. Unfortunately, after a while, some things was found out. He spent time with a model Lani Blair - he flirted and kissed her at the PH-D Lounge nightclub, and then retired with Blair at the fashionable Four Seasons Hotel. It was eventually confirmed to be true even by members of the Kardashian family. Tristan cheated with 5 different mistresses at the same time. And he couldn’t denied it due to cheating photos and even video which were made public. It was a huge cheating scandal for Kardashians. All the Internet talked about it.

Not long after Thompson was accused of cheating on Khloe, social media users started posting tons of memes and jokes about him. Many have been calling him “Third Trimester Tristan Thompson”. He was named like this because of gossips that he left his ex-girlfriend, Jordan Craig, in her third trimester, when he met Kardashian. However, this has been denied. Despite all this facts Khloe decided to stick with her baby daddy. Also in his private life was a very distasteful fact.

TMZ published news about a woman claiming she spent the night with Tristan Thompson in NYC this weekend. Side chick posted and quickly deleted a sex tape and text messages with the NBA All-Star. Moreover, Tristan has quite the temper and constantly argue with someone. For example, Draymond Green and Tristan actually dapped each other up after a heated altercation at an ESPYs after-party. Thompson punched Green during an argument.

At present, Tristan has a net worth of $35 million.