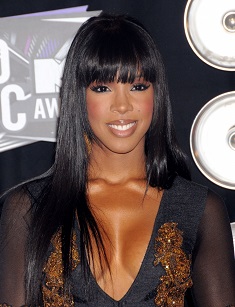 An American performer and a really talented songwriter, dance master and cinema actress, model, and television anchorperson - all this is a proven track record of excellence of Kelly Rowland. In that climb to her fame in the late nineties within the group Destiny's Child, she was well on her way to the summit, and there was no turning back. And she is still delighting fans with her hits that are continuously aired by leading radio stations and music TV channels.

Her unremarkable birthday falls on Wednesday. The girl was born on 11th of February 1981 in Atlanta, Georgia, in an ordinary family excepting that her parents contracted marriage only after her birth. However, seven years later, the family is breaking apart. Mrs.Doris Rowland Garrison divorced Mr. Lovett due to his unfavorable diagnosis - alcohol dependence coupled with aggressive behavior that makes their conjugal life impossible and takes her away to protect her. About a year after that Kelly at the age of eight already lives in Texas, later in Houston she meets the Knowles family and becomes a close friend of Beyoncé.

Kelly tries to fulfill herself by taking a chance with a rapper-dance command together with Beyoncé. They first performed under name Girl's Tyme. Soon their numerous team is dropped to just six participants. They are doing everything to catch the ears of those who can contribute to the achievement of their dream. Eventually, an R & B producer Arne Frager decides gives them a fair shot to express themselves in one of Californian studious. Beyoncé becomes the group leader, as the producer makes value judgments about her personality and singing skills as superior to other girls. The contract is still up in the air and should enter into force upon completing one of the stages of a quite complicated scheme providing for Girl's Tyme debut in a TV talent hunting show Star Search - a landmark event for each one of those years. The girls were able to participate in the project and failed - as the performers themselves later acknowledged, their chance to make a great entrance and to make themselves heard had disappointed their hopes.

Beyoncé's father, the medical equipment dealer Mathew Knowles, makes a final decision and does desperate things serving as a manager of the group. He leaves his main business activity for directing all his capabilities to exclusive supporting Beyoncé and her company. After a while, he manages to create some kind of a training camp for the girls. Rowland is already living in their family by that time so that those changes had a considerable impact on her.

Meanwhile, the financial situation of the family is experiencing significant changes and leaves a great deal to be desired. All that and mental and a physical pressure for Mathew result in Beyoncé's parents soon divorce. After a while, the newly-minted manager understands the need to reduce the group to just four participants. Rehearsals are held in the hairdresser's shop and backyard. Their manner of performance, both the style and its execution is liberated, unusual and innovative and opens the way for many similar groups, in a way. Mathew somehow manages to continue his efforts for successfully securing the award of a contract with Electra Records; however, after some months of intensive efforts they were back to square one, and the contract was terminated.

They find a new name for the group in 1993. Since then they successfully identify themselves as Destiny's Child on various local stages from coast to coast within four years. The group finally do manage to find common ground with Columbia Records in late 1997; within one-year girls make a debut and record the Killing Time as a soundtrack for the film Men in Black. The coming year will be a year of their first album release named after them and containing different openly hit songs similar to “No, No, No." This album is one of the most expected debuts marked by three Music Awards. And they saw that as the starting moment for the big step.

Then, just before the end of the group's creative activity, Kelly aligns herself with Nelly for a world-class hit Dilemma. After which she releases her first own album Simply Deep. Commercially, it is quite successful - some two million copies were sold. And also three worthy singles launched, including Stole and Can't Nobody.

Shortly after the group completed its mission in 2005, Kelly releases so long-delayed second album Ms. Kelly, marked by relative success. Nevertheless, it is thanks to the event the hit singles Like This and Work echo triumphantly across European dance floors and night clubs. In 2009 the singer, also full of energy, makes her presence felt again in the single When Love Takes Over released by David Guetta.

Let's bear in mind 2011 year with its Motivation and Lay It on Me as well as Ice that appeared in 2012 which have not gone unnoticed too.

In 2004, Kelly started a romantic relationship with Roy Williams, a Dallas Cowboys player. The couple said they are thinking about a need to formalize them, so visible to all, feelings. However, the singer and the NFL star come to a decision to back out of this idea in the winter of 2005.

In the autumn of 2013, it becomes aware she is dating Tim Witherspoon, her manager, despite their best efforts to hide their feelings. She continues to meet her future husband and finally agreed. Kelly was getting married to Tim on May 9, 2014. The wedding is held in Puerto Rico in the circle of relatives and close friends. Shortly thereafter, the young family announces good news - Kelly Rowland is pregnant.

She gives birth to her son Titan Jewell Weatherspoon on the 4th of November next year.

After the album “Talk a Good Game” in 2013, ex-vocalist of the Destiny's Child is not felt for a long time in music and keeps lingering silence, except for the promotional single Gimme Love presented as part of the Seagrams's Escapes promotional beer campaign in 2016 and several collaborations. However, sometimes she claims that she has returned to music and is preparing the next album.

And then, finally, one day, she delivers on her potential as her first shot at releasing the long-awaited single Kelly that becomes a hymn to self-affirmation, dedicated to all who believe they have been used. Kelly Rowland's quiet speech, accompanied by measured urban rhythms, sounds positive, boldly and confidently. The meaning of the words is in celebrating life breath, worthiness and other happy qualities that are perfectly matched with her hedonistic and charming personality.

And after the baby is born Kelly dedicates herself to him for all year long that also provides her sufficient material for further analysis to issue the book 'Whoa, Baby!' in 2016. Then she even thinks to leave music-scene activities completely, but she doesn't feel equal to it. According to her, she still wants to record lyrics because she has a physical feeling she is missing something. Time goes quickly, and the void space of creative block requires filling with work. And now Kelly is again friendly to new creative challenges.

In conclusion, referring to Kelly's earlier words about a curious fact which the R & B song star certainly doesn't try to hide that she is doing her job well, but could not boast of a sharp memory. The thing is, she often forgets the lyrics while being on stage. That is to say; when the audience sees her offering hand with the mike in their direction, it means that the singer has forgotten the words. Sometimes she's doing it on purpose to encourage interactivity, but more often than not, it is indicative of her another blackout. Anyway, she has not lost the sense of humour, and it helps her to overcome the difficulties, and one can be convinced after visiting her Instagram. Nude or naked in pregnancy, with coiffed hair or curly hairstyle, but always within the boundaries of decency and good taste. She is being at her height now and gives us the optimism and flow of spirits. In any case, her fans are not giving up to hope that her best albums may come soon.