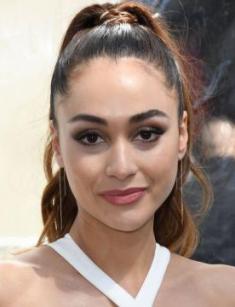 Lindsey Morgan is an American actress, known for her roles in the TV series The 100, General Hospital and others.

Lindsey Morgan was born on February 27, 1990, in Houston, Texas. The actress is of Mexican and Irish descent. Lindsey has an older brother, a half-sister, and five step-brothers.

Lindsey attended college at the University of Texas at Austin. During the first year of college, the future actress worked in the field of advertising and then moved to Los Angeles to fulfill the dream of an acting career.

The actress played the first role, a cheerleader named Alexis, in the 2011 film Detention. The same year, Lindsey starred in the movie DisCONNECTED, in which she appeared as Maria, a girl who was dependent on social media. The film was shot by MTV as part of a campaign aimed at combating the destructive influence of social networks on the lives of young people.

In 2012, Lindsey landed the role of Kristina Davis in the soap opera General Hospital, and a year later she was nominated for an Emmy Award for this role. Having completed shooting in the series, the actress played the supporting role of Noemi in the indie movie Chastity Bites in 2013.

Then Lindsey played Ariana in the TV film Casa Vita, which was the first leading role in her career. Her heroine is an American-Mexican chef who dreams of opening her own fusion cuisine restaurant, which unhinges her father. In the meantime, Ariana works at Casa Vita, her father’s restaurant.

In 2016, the actress was invited to play another leading role in the thriller Lasso. Lindsey's character feels deep remorse because she cannot protect other people, which is the central theme of the film.

The actress also starred in episodes of several series. In 2011, Lindsey appeared in the episode “The Magnificent” of the action-comedy superhero series Supah Ninjas. A year later, she played the role of Lauren in the episode "The Drunk Train" of the series How I Met Your Mother.

Later, the actress appeared in one episode of the comedy series Happy Endings, which showed the life of a group of friends. Two of them break up on the wedding day and thus make others feel uncomfortable. So, the friends in common have to decide whom side with.

In 2013, the actress appeared as Jennifer in one of the episodes of the comedy-drama series Franklin & Bash. The plot of the series revolves around the life of two talented lawyers who were hired by a prestigious law firm.

Lindsey also played a title role in the TV series The 100. The series focuses on the future. A nuclear apocalypse happened on Earth, and all people died.

Few survivors live in a space station orbiting Earth; they live in rough environments and are punished with the death penalty for any offense. 100 juvenile detainees are sent to Earth to determine whether it is habitable.

Lindsey’s heroine named Raven Reyes works as a mechanic at the orbital station, she has a good knowledge of radio equipment and knows how to create bombs. Raven has a difficult character, and even the life with an alcoholic mother cannot break her down mentally. In addition to Lindsey, the series involved actors such as Ricky Whittle, Eliza Taylor, and others.

One of the latest projects in which Lindsey took part is the medical drama series The Night Shift. The actress appeared as Kryztal in the episode "The Way Back" in 2016.

The actress carefully hides her personal life from prying eyes; until recently, fans did not know any information about her boyfriends and love affairs.

In 2017, rumors appeared that Lindsey Morgan had a close relationship with actress Nadia Hilker, her colleague on the series The 100. Nadia played the role of Luna, the queen of the clan. However, they did not officially confirm or refute them.

Lindsey has accounts on Twitter and Instagram, where people can find out the latest news about the life of the actress.

Lindsey posed for the cover of Grumpy Magazine. The actress is involved in social work; for example, she supports the Active Minds Foundation, which strives to prevent suicide among students and schoolchildren and deals with the issues of psychological health.

Lindsey loves traveling and has recently visited Morocco, where she rode a quad bike and camel with friends.

Lindsey Morgan has a net worth of around $1 million.