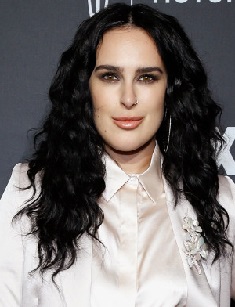 This young actress has her individuality and multiple talents. During her long-lasting acting career, she proved to be the bright actress and the person. Although she had suffered some difficulties connected with her Hollywood childhood.

She came into being on 16 August 1988 in an accomplished acting family of Bruce Willis and Demi Moore. As a star kid, she was destined to be in the spotlight from her childhood. Such kind of lifestyle brought Rumer many challenges. The girl suffered from lower self-esteem, being a subject of bullying at school and media.

People always have put much attention to her appearance. Everyone expected that a girl would be a beautiful combination of her parents. But instead of admiration, a lot of harsh criticism had come down on the growing up girl.

People always were talking not in a good way about her face, chin, and looks. Later Rumer confessed that her childhood was tough as she never felt comfortable with her skin. People called her "buttaface", that means everything is hot but face. Public always compared the girl with her mother and said that she took more of her dad with his ultra-masculine features.

"I was a dork, a computer nerd had braces and glasses. I wasn't necessarily too active in getting in the social crowd, so I definitely understand the entirely not fitting in, but I think everyone has their own version of feeling a bit out of place and one of the great things I think that we have the ability to do is show that it's alright. You can have that awkward phase, so It's not about whether you're the popular girl or the nerdy one but just about feeling confident and comfortable with kind of where you fit and who you are and accessing that and making that your own."

But Holywood childhood had its seeds. Rumer with her two little sisters traveled a lot with their parent and grew up on film sets. The actress mentions:

"I've traveled to some really incredible places, but my basic math skills are horrendous."

As to education, Rumer was supported by her parents in all her endeavors. They dreamt of Rumer's completing education and getting a degree, and at the same time, they encouraged Rumer to pursue a career in acting. She had a busy schedule and dropped out of the University after the first semester.

She started her acting career in the early years playing minor roles alongside her parents. Today she became a celebrity in her own right. She is a diverse actress who takes part in various genres – comedies, love stories, and even horrors.

Thus in 2008, she appeared in the comedy "The House of Bunny" and horror movie "From within," which received positive reviews. She becomes a well-known actress after films "The Odd Way Home" and Sorority Row."

Rumer repeatedly appeared on TV shows as a guest. The 2013 year was good for her as she took the role of Zoe on "Six Letter Word." In 2015 she made a debut on Broadway playing Roxie in "Chicago," then she appeared in drama "Empire." The actress played a singer on Empire, Tory, and showed that she has multiple talents of acting, dancing and singing in her bluesy style.

Her participation in the show "Dancing with the stars" brought her much fame, she with her partner became champions in the season. The actress' body changed during this project. The 26-year-old actress showed off her toned physique in a sparkling nude bodysuit with exposed midriff and back.

"It's pretty tough when you're jumping up and down and shaking it everywhere … This [outfit] was very exposed for me. I tend to like to keep myself a little more covered up."

In 2019 she took part in the reality TV show "The Masked singer." She said:

Rumer has dated with several actors, Rafi Gavron, Micah Alberti, Chord Overstreet, Jaison Blair, and Ricky Whittle. But these relationships were not lengthy and hadn't resulted in marriage or pregnancy. Rumer's orientation is straight. The fact that she has a busy dating life, but none of her relationships was with women prove that she is not gay.

Though Rumer is a star child from an accomplished acting family, the actress is determined to establish herself as an independent personality and recognizable face in the entertainment industry. Now her worth net is estimated at $4 million.

There are a lot of talks about Rumer's appearance, especially in recent years. The public can't but pay much attention to the dramatic transformation of 30-year-old Rumer. She was so unhappy that she started to consider drastic measures. Rumer thought of making plastic surgery and get skinny. But her little sister helped her to overcome her problems. That time Tallulah had even more severe issues substance abuse problems and eating disorder. Tallulah managed to recover and overlooked her sister.

Rumer with her parents

Though her parents divorced, all members of the family has a good relationship and often meet together.

Rumer began to accept herself and stopped listening to people. And results came quickly; the 30-year-old women gained unique style and beauty. Rumer denies all rumors about plastic surgery.

She is active in social media with a massive fan following on Instagram and Twitter. She wears spectacles in everyday life and prefers to manage without make-up.

The actress has got several tattoos and recently has removed some of them.