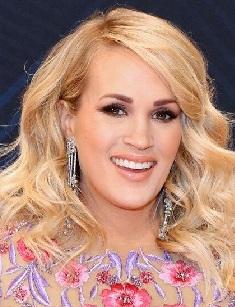 Carrie Marie Fisher (née Underwood) is a famous American singer, actress, and songwriter. She became popular after taking part in the American Idol show in 2005 – due to the program, talented young Carrie got acquainted with show-business and started serious projects. Her lyrics have always reached the highest places on numerous charts. So, let's get acquainted with the star!

Carrie Underwood's birthplace is Muskogee, Oklahoma, the United States. She was born on March 10, 1983, to the family of Carole (Shatswell) and Steve Underwood. Carrie was the youngest children for them – she had two sisters. The future star spent almost all her childhood on her parents' farm in the nearby rural town of Checotah. Their family was a middle-class one: Carrie's father worked in a paper mill while her mother was an elementary school teacher.

From the very infancy Carrie became interested in singing and tried out performing – as a child, she was invited to Robbins Memorial Talent Show and sang at her local church, First Free Will Baptist Church. Also, she appeared at local events in Checotah, such as Old Settler's Day and the Lion's Club.

Once she was noted by a producer, who liked her pitch. He accompanied her to audition for Capitol Records in Nashville – Carrie was only 14 years old. In 1996 the company planned to sign a contract with her, but the management changed and denied this measure.

As a high school student (she attended Checotah High School), Underwood became an Honor Society member. Besides, the girl was interested in basketball and softball. In 2001 Carrie graduated – she was a salutatorian. In her plans for the future, there was no thought about becoming a singer – she wanted to stop performing cause supposed singing would never bring her enough money and prominence.

Later Underwood entered Northeastern State University in Tahlequah, Oklahoma, from which she graduated in 2006. She has a bachelor's degree in mass communication and an emphasis in journalism.

Her student life was exciting: she took part in Northeastern State University's Downtown Country show in Tahlequah, in numerous beauty pageants at the university and was selected as Miss NSU runner-up in 2004.

Striving to earn a living, Carrie worked as a page for Oklahoma State Representative Bobby Frame, was a waitress at a pizzeria, served at a zoo, and a veterinary clinic. Underwood is an alumna of the Alpha Iota chapter of Sigma Sigma Sigma sorority.

In summer 2004, Carrie applied for the American Idol audition in St. Louis, Missouri, singing Bonnie Raitt's song "I Can't Make You Love Me." She went through it successfully and was said to be one of the most outstanding competitors. On March 22, 11 finalists's performances were broadcasted – Carrie appeared with the number-one 1980s rock hit "Alone." The viewers were sure about her victory – her fandom "Carrie's Care Bears" was the biggest among others. On May 25, 2005, she was named the fourth winner of the season. As a prize, she signed a $1 million contract, got a private jet for a year, and a Ford Mustang convertible.

Carrie's first single "Inside Your Heaven" was released on June 14, 2005. It brought enormous popularity to the singer – it peaked at No. 1 on the Billboard Hot 100. She was the second country-singer to start a career with a 1-place song since country group Lonestar's "Amazed" did so in 2000. By the way, no one of her songs would debut at No. 1 in the next decade. Also, it spent more than 7 weeks at the top of the Canadian charts. Its sells' level was evaluated at 1 million copies and the album was certified gold by the RIAA and double platinum by the CRIA.

Later Underwood pleased her fans by a debut album "Some Hearts." Released on November 15, 2005, it reached No. 1 on the Billboard Top Country Albums and No. 2 on the Billboard 200. Underwood succeeded to sell more than 315 000 copies in first two weeks – it was later named the most selling country album in 2005, 2006 and 2007 and brought her Top Country Album award. The album is certified eight times platinum by the RIAA.

On April 11, 2007, the star released a new song "Wasted" which succeeded to get to the first place on the Hot Country Songs and to be certified Platinum by the RIAA. That time Underwood had a North American tour called Carrie Underwood: Live 2006.

In October 2007, the second Underwood's album "Carnival Ride" was released. She collaborated with such stars as Hillary Lindsey, Craig Wiseman, Rivers Rutherford, and Gordie Sampson and herself wrote the texts to album's singles. In the first week, more than 527 000 copies were sold. Carnival Ride got to the Billboard 200, to the Canadian Albums Chart. It consisted of such songs as "So Small," "All-American Girl," "Last Name," "Just a Dream," " I Told You So." In January 2008, Underwood started a tour alongside Keith Urban – it was named the Love, Pain and the Whole Crazy Carnival Ride Tour. In February she embarked on another tour called "Carnival Ride Tour" around North America.

2009 was marked by Underwood's third album "Play On" which got to the top of the Billboard 200 and the Top Country Albums. Its total sells' level was estimated at 318 000 copies in the first week. The album included the songs "Cowboy Casanova" (co-written by Underwood, Brett James, and hip-hop producer Mike Elizondo), "Temporary Home," "Undo It," "Mama's Song."

Underwood spent the next two years touring the country – totally, she performed in front of 1 million fans.

The next Underwood's album was called "Blown Away" – she released it on May 1, 2012. It grabbed the first places on the Billboard 200, the Country Albums chart, Digital Albums chart. The musician sold near 267 000 copies in the first week. Among its songs, there were "Good Girl," "Blown Away," "Two Black Cadillacs" and "See You Again."

In December she released the album called "Greatest Hits: Decade #1" which included her best songs. Its leading single was "Something in The Water." Also, it included the popular track "Little Toy Guns."

Carrie released the fifth album called "Storyteller" on October 23, 2015. It was led by the single "Smoke Break." The album happened to be successful, like her previous works – it reached No. 2 on the Billboard 200 and got to the top of the Country Albums chart. The listeners liked the songs "Heartbeat," " Church Bells," "Dirty Laundry."

At the beginning of 2016, Carrie started the Storyteller Tour – she grabbed more than 1 million fans, visited 7 countries with 92 concerts.

The next year Underwood left Arista Nashville and signed a contract with Universal Music Group Capitol Records Nashville. Also, she went for The Storyteller Tour: Live from Madison Square Garden. At the end of 2017, Carrie got injured in fall by accident and didn’t appear in public for several months. Carrie didn't share details of her injuries until January when she shared a note with fans about what happened. She revealed that she not only hurt her wrist and legs but also severely injured her face, got several scars—and ended up needing 40 to 50 stitches.

Underwood released the sixth studio album called "Cry Pretty" was released on September 14, 2018. It got to the first place on Charts in many different countries. In the first week, Carrie sold near 266 000 copies domestically – it was called the most selling female album 2018. One of its most famous songs is «Love Wins.»

The same year, she published a single featuring Ludacris – «The Champion.»

Carrie's current net worth is evaluated at $85 million.

Carrie Underwood is a founder of the Checotah Animal, Town, and School Foundation (launched in 2009). This organization is aimed to help students be involved in music, sport, and other activities. Its members often arrange charitable concerts at schools and give presents to its viewers.

Underwood is a member of the Humane Society of the United States (HSUS). Alongside Pedigree, the singer donated $10,000 to a New York City Animal Shelter. In 2012 the news appeared that Carrie rescued an abandoned dog along the highway.

Underwood and her husband have created a video "Do It for Daron" for the sake of preventing young people from bullying. In 2012 she claimed she supported same-sex marriages.

Also, Underwood is a founder of the Academy of Country Music Lifting Lives Temporary Home Fund which supports victims of the Tennessee floods of early 2010. The organization was launched due to the money she got as grants.

Carrie is a member of the United Service Organization, Clothes off our back, and Habitat For Humanity alongside Beyoncé, Mariah Carey, Mary J. Blige, Miley Cyrus, and other female artists.

In 2008 Carrie Underwood began a relationship with NHL player Mike Fisher – they met at one of her concerts in late 2008. According to Carrie's future admissions, it was the love at first sight. They led a long-distance relationship, cause Underwood lived in Nashville, Tennessee and Fisher played hockey for the Ottawa Senators in Canada.

Even a distance couldn’t destroy Carrie's trust for Mike. Once she said:

"Any guy I've ever dated, there would always be that doubt...but I don't have to worry about Mike."

The spouses have shared that their first kiss was in New York City's Times Square during the annual New Year’s Eve celebration.

In 2009, the happy couple got engaged and married in July 2010. The wedding took place in the Ritz Carlton Reynolds Plantation, Greensboro, Georgia.

In 2011 Mike finally moved to Nashville. In 2015, Underwood gave birth to their son, Isaiah Michael Fisher. Now 3-year old, he often tours with his mom. In 2017, after 17 years playing in the NHL, Mike announced his retirement in an open letter published in the Tennessean. But in early 2018, Mike grew antsy in retirement and missed his sport: according to US Weekly, it was Carrie who urged him to go back onto the ice.

In 2018 the rumors about their marriage appeared – it was said that they had planned to split up. However, later the stars denied all the gossips.

While Carrie was off performing at the 2017 ACM Awards, she showed her love and support for her husband's career with a sweet Instagram post. She shared a photo of her son Isaiah attending his dad's hockey game—decked out in a mini Nashville Predators jersey no less!

In August 2018, Underwood announced her second pregnancy, although she had earlier had doubts about her fertility. Apparently, even with baby number two on the way, the couple still considered bringing more kids into their life – they planned to adopt children. In January 2019, the other couple's son was born – his name is Jacob.

In her career, Underwood succeeded to get many awards and accolades, including seven Grammy Awards, 11 Billboard Music Awards, 14 ACM Awards, 13 American Music Awards, nine CMA Awards, and a Guinness World Record. Also, she has been introduced to Hollywood Walk of Fame, Grand Ole Opry, Oklahoma Hall of Fame, and Oklahoma Music Hall of Fame.