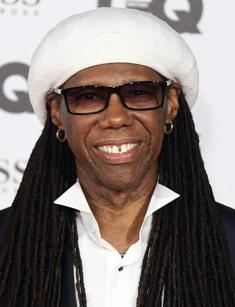 Nile Rodgers, a prominent American music producer and singer, has started his professional career performing with the band Chic. Having parted ways with his crewmate, the artist began a solo career and gained international recognition. However, his life is not so plain – he had been addicted to drugs from the age of 13 and almost died because of addiction. Read below more facts about Nile Rodgers right now!

Nile Rodger's birthplace is New York – he was given birth there on September 19, 1952. His mom was only 14 years old at the moment. His birth father – a traveling musician – appeared very seldom in Nile's life. So, they saw each other only a few times before the man died in 1970. Remarkably, his mom initially gave Rodgers up for adoption, but later changed her mind and fought for the custody of him.

Later, Nile's mom found a new husband – the two tied the knot in 1959. As a kid, he got acquainted with musicians who used drugs through his parents and eventually started consuming them as a 13-year-old boy.

Three years later, he began taking guitar lessons. Moreover, he had learned to play the flute and the clarinet.

Being a teenager, Rodgers embarked on a tour with the TV program named Sesame Street. Also, he served at the Apollo Theatre. Working there, the future celebrity got to know rising star Bernard Edwards. The two got along well and decided to create a music group named The Big Apple Band. Besides, they played backup for the other music band – New York City. In 1977 the artists renamed their band's name cause they have found another group with that name – then, they started performing under the title Chic.

Alongside Edwards, Rodgers launched the CHIC Organization Ltd which was to produce music by other musicians. In 1978 they came to present the first album «C'est CHIC» which advanced to No. 1 on Billboard Chart. Its songs «Le Freak,» «I Want Your Love» became the biggest hits. The first one set the record of sells' level of a song in the whole history of Atlantic Records. In 1979 the musicians took up the production of the collection «We Are Family» by Sister Sledge – its two songs became number-one hits on the American charts. 1979 was also marked by a new album by Chic – «Risque.»

In the 1980s Rodgers started creating solo music, collaborated with many prominent musicians such as Britney Spears, Prince Rogers Nelson, Jota Quest, Madonna, Duran Duran, Avicii. He also helped Diana Ross on her collection «Diana» – it was presented in 1980.

Three years later, Chic's member parted ways. As a result, Rodger pleased his fans by releasing a debut solo collection «Adventures in the Land of the Good Groove.» The artist kept producing music by other singers – that time he contributed to «The Reflex» remix by Duran Duran. Shortly after, he produced Madonna's collection entitled «Like A Virgin,» consisting of the songs «Like A Virgin» and «Material Girl.» Besides, Rodgers was invited to perform at the Live Aid concert.

In 1985 the artist presented his second album «B-Movie Matinee.»

In the 1990s Rodgers was lucky to create the soundtrack for the movie Thelma and Louise.

At the beginning of the 2000s, he continued working on video games and movies soundtracks. In 2002 Duran Duran released the collection «Astronaut» which advanced to No. 3 on the UK charts due to Nile Rodgers'production.

In 2010 the musician published a box set named «Nile Rodgers Presents The Chic Organization, Volume 1: Savoir Faire» consisting of almost all singles by Chic prior to their split-up.

2014 brought Rodgers his track «Do What You Wanna Do.» The following year was marked by his single «I'll Be There.» In 2016, the artist worked with Lady Gaga on remaking the song «I Want Your Love.»

In June 2017 Nile Rodgers performed at the Glastonbury Festival – his performance was witnessed by near 100,000 people. In summer 2018, he presented the track «Till the World Falls». In September, the musician published the collection «It's About Time.» Its best songs are «Sober» and «Do You Wanna Party.»

The same year, he arranged a tour. According to its setlist, it started on April 15, 2017.

Nile Rodger’s net worth is evaluated at $70 million.

Nile Rodgers’ TV debut was made in 1978 – he starred on American Bandstand alongside Chic. Many American directors have shot documentary movies about him – some of them are Nile Rodgers: Secrets of a Hitmaker, Composing America: The Musical Talents of Nile Rodgers.

In the 1990s, as a result of using drugs and consuming alcohol, he ended up waking up in a hospital. His heart almost stopped near ten times. Eventually, the musician gave up drugs because of a fear for his health.

In 2010 doctors stated Rodgers had an aggressive form of prostate cancer. In 2019, performing at a concert, he claimed he had cured his disease.

Speaking about Rodger’s relationship, he has a woman – Nancy Hunt. Although she is not his official wife, the two live together.