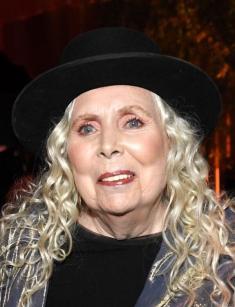 Joni Mitchell is a Canadian-born singer, songwriter, multi-instrumentalist, independent music producer, painter, and graphic artist from the United States. Regarded by many critics as the most influential female musician of the 20th century, Mitchell wrote songs about womanhood, societal ills, romance, hope and joy. She created her music at the crossroads of jazz, folk, pop and rock traditions. She collaborated with many jazz musicians, including Charles Mingus and Herbie Hancock.

Having produced and released most of her albums by herself, Mitchell stands as one of the most successful independent rock musicians alive. Her signature album "Blue," released in 1971, was included in the Rolling Stone's "500 Greatest Albums" list. It was also chosen by NPR as the "Greatest Album Made by a Woman," and called "history-changing" by critics at the NYT.

Joni Mitchell was born Roberta Joan Anderson in the small town of Fort Macleod, located in the Canadian province of Alberta. Her birth date is November 7, 1943. She was raised by her father, William Anderson, a pilot flight instructor, and her mother, Myrtle McKee, a school teacher. Mitchell has Scandinavian, Irish and Scottish heritage.

Joni Mitchell was a sickly child. She recovered from polio and picked a habit of smoking at an early age. Cigarettes may have contributed to her singing voice becoming much deeper during her career.

The ukulele was the first instrument Joni taught herself to play. It was followed by the guitar. Mitchell started performing her own songs at the age of 18, to a close circle of friends.

1964 was the year when Mitchell made the decision to devote her life to music. She sang folk songs to small audiences at bars, hotels, churches and radio shows in Calgary. She left her home and moved to Toronto to make a name for herself as a folk music artist. Her parents were devastated by the news.

A year later Mittchell started performing her original material and decided to move to Detroit in the United States, which had a bustling folk and rock scene at the time. She also started using her trademark alternative guitar tuning which brought her a lot of attention.

In 1968 Mitchell met Tom Rush, who was an influential folk performer. He introduced her to other established artists and Mitchell started writing songs for them. She was introduced to legendary David Crosby who helped her release her first acoustic album and organize a tour.

The debut album, titled "Song to a Seagull" became a huge success, propelling Mitchell into the spotlight.

As a touring artist, Mitchell peaked during the ‘70s. Her "Ladies of Canyon" and "Blue" were praised by fans and music critics alike. She wrote and performed a song titled "Woodstock," that became the unofficial anthem of the festival.

She continued to perform for the next 30 years, taking a break in the early ‘00s due to health problems and marital issues.

Joni Mitchell has had a turbulent love life, being married and divorced twice. Her husbands were Chuck Mitchell and Larry Klein. She had to give up her daughter, Kelly Dale Anderson, for adoption in 1965. She also briefly dated singer Graham Nash.

Joni Mitchell has released 19 studio-recorded and 5 live albums, 28 music videos and 33 singles. 12 of her albums became Gold and Platinum-certified. Mitchell's songs influenced popular artists of the following generations, including Madonna, Björk, Taylor Swift and Ellie Goulding among many others.