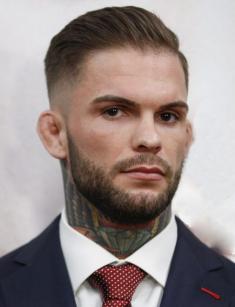 The American mixed martial artist Cody Garbrandt performs in the UFC; he used to be a champion. The man spent some time in the shadow of strong athletes; in 2016, he defeated Dominick Cruz and proved that he deserved the match for the title.

Cody was born in summer 1991 in a small town Uhrichsville, Ohio. He was brought up by the mother and the stepfather. The man adopted the children, Cody and his brother Zach who was ten months older. Soon, the parents divorced, and the woman had to raise two sons alone. It was challenging, but she managed to do that.

Because the mother worked a lot, she lacked time for caring about the kids. The woman brought them to a school camp. Cody got acquainted with martial arts and participated in a competition in the end; the boy took an interest in sports.

As an elementary school student, Garbrandt attended wrestling classes and showed good results; together with his peers, he participated in competitions. The mother supported her son but tried to talk him out when the young man started boxing. One day, drunk Cody and his brother were involved in an unpleasant situation and had a fight; the mother was worried and asked them to quit this sport.

The young men were trained by their uncle, coach Robert Meese. Cody paid more attention to wrestling, though; boxing was more like a hobby for him. By the time he entered a high-school, Garbrandt had gained enough experience and fought for the title of the champion. The sportsman demonstrated his talent and became the winner of the state; the next year, he got the second position.

Cody’s hot temper manifested itself in many situations outside the gym. He often used his skills against peers during conflicts; the mother had to transfer her son to another school because school administrations did not want to deal with the hooligan.

Later on, Garbrandt switched to boxing for a while and came back to wrestling; soon, he quitted this sport.

At the age of 14, Garbrandt debuted in boxing. The next six years were marked with 32 matches: it was the recording number for an amateur. Although the young man was no longer involved in wrestling, he was invited to a local camp for MMA athletes. Right after Cody turned 18, he had the first amateur MMA fight. In 2012, he debuted as a professional under the pseudonym “No Love” and knocked out his rival in the first round.

The next two years, Cody participated in five matches and won all of them by knockouts or technical knockouts. He faced Charles Kessinger, Shane Manley, Dominic Mazzotta, James Porter, and Charles Stanford.

In 2015, Garbrandt began his UFC career. He debuted in the match against Marcus Brimage. Before, many sports lovers considered him an outsider. After the third round, when Cody won by the technical knockout, the athlete was noticed and appreciated on the professional level.

The next fight was held the same year, in summer. Cody fought against Henry Briones; three out of six takedown attempts were successful, and the jury called Garbrandt the winner.

In February 2016, the man performed a technical knockdown in the meeting with Augusto Mendes. Initially, John Lineker was supposed to participate, but he was replaced by another athlete a week before due to his disease.

In spring and summer 2016, Garbrandt had two more matches. The first one happened on May 29 against Thomas Almeida. It took Cody three minutes to knock down his opponent; he received Performance of the Night for that.

On August 20, the meeting with Takeya Mizugaki took place. Just like in the first case, Garbrandt won with the technical knockout. It was the record in the athlete’s career: the match lasted only 48 seconds.

December 2016 was marked with a significant fight: Garbrandt had the chance to become the best bantamweight fighter and gain the champion belt. Dominick Cruz was his opponent; nobody doubted in his superiority. When the jury’s decision about Cody’s victory was unanimous, it was a tragedy for Cruz: he had lost no fight throughout ten years. Garbrandt became the UFC bantamweight champion and received Fight of the Night.

The next year, in November 2017, Cody Garbrandt met T.J. Dillashaw in New York. The match identified the 2017 UFC bantamweight. At this time, Cody’s opponent was stronger and knocked out Garbrandt for the first time in Cody’s career. As a result, he lost the title of the champion. In 2018, the sportsmen met again and fought for the same title again. Cody lost: he was knocked out four minutes after the beginning of the match.

Garbrandt is actively involved in sports, and he is also happy in his family life.

Before the marriage, the athlete dated Paige VanZant, a UFC fighter.

Today, Cody is married to Danny Pimsanguan and has a son. The couple met at a party: Cody was a guest, and Danny was a model at a presentation. The woman has Thai roots: her father came from Thailand. Danny and her sister are photo models who work for Wet Republic magazine.

In March 2018, the woman gave birth to a son. The couple will probably have more children.

Garbrandt communicates with his fans via Instagram and regularly shares new photos. Fans often discuss the sportsman’s haircut and tattoos the number of which is growing every year.