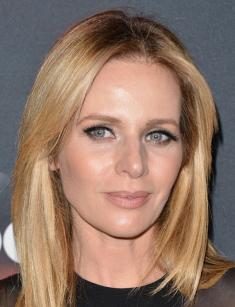 The future Hollywood star was born on May 26, 1971, in Montreal, the largest city in the Canadian province of Quebec. Her father, Toby Gilsig, worked as an engineer. Jessalyn inherited an excellent capacity for hard work from him.

Her mother Claire was a writer who translated pieces of poetry, poems, and odes during a creative crisis. The woman helped the daughter cultivate her imagination and instilled in her a love for the film industry. Claire liked the projects of eminent director Stanley Kubrick. The actress has recalled more than once that she and her mother could spend the whole weekend watching his films.

From a young age, her delicate psyche helped the actress find beauty in things that seemed unremarkable at first glance. At the age of 11, Jessalyn became interested in painting and showed acting skills. In the daytime, the young talented girl arranged theatrical performances for the parents, parodying their friends, and in the evening she learned to draw anything that randomly came to mind.

When the father understood that his daughter craved for art, he told the beloved child to choose the class where she would go after lessons. The future performer of the role of Terri in the TV series Glee preferred acting lessons to the fine art. After graduation from high school, the actress entered the local drama school, where she had the opportunity to study theatre and drama studies (the art of acting, stage design, dramaturgy, scriptwriting, theater management).

According to Gilsig, teachers staged productions at the American Repertory Theater at Harvard University every month, and she often got the leading roles in them. While improving her acting skills, Jessalyn obtained higher education. From 1989 to 1993, she attended McGill University, graduating with a Bachelor of Arts degree.

Gilsig began an acting career at the age of 12. While studying at school, she was lucky to participate in the voicing of the film Masquerade (1984). The actress made her big movie debut in 1989 when the psychological drama Jacknife directed by David Hugh Jones was released. Jessalyn got the role of the protagonist’s friend in the film. The same year, she appeared in the short film The Journey Home. In 1991-1992, Jessalyn voiced the characters of the movies The Little Flying Bears, Young Robin Hood and Gulliver's Travels.

The actress became famous in 2000 when she began shooting in the TV series Boston Public, in which Michael Rapaport, Jon Abrahams, Kathy Baker, and Anthony Heald became her partners on the set. In 2003, Jessalyn’s filmography included a new role. The producers invited Gilsig to play Gina Russo in the project Nip/Tuck, in which the actress starred for five years. Then she played in the TV series Prison Break, Law & Order (the leading role in an episode) and the role of Meredith Gordon in the most popular 2007 TV series Heroes.

2008 was marked by her roles in the films XIII: The Conspiracy, Prom Night and CSI: NY. One year later, Gilsig starred in the American thriller The Stepfather directed by Nelson McCormick. The film was a remake of the 1987 film of the same name directed by Joseph Ruben.

The same year, the actress got a role in the TV series Glee. The creators of the series are Ryan Murphy, Brad Falchuk and Ian Brennan. The television pilot premiered on May 19, 2009, immediately after the finale episode of American Idol. The film received mainly positive reviews from critics, was nominated for 19 Emmy Awards, four Golden Globes Awards and six Satellite Awards. Glee won the Golden Globe Award for Best Television Series – Musical or Comedy twice (2010 and 2011).

The Canadian-Irish series Vikings premiered on March 3, 2013. The project was directed and created by Michael Hirst for the History channel. In the drama, Jessalyn portrayed a woman named Siggy, the wife of warrior Earl Haraldson and the mistress of Viking Rollo.

Gilsig has always hidden her personal life. Although the actress has been married, there is little information on the Internet regarding her relationship with men. The first and only husband of Jessalyn was film producer Bobby Salomon. The couple married in 2005 in a traditional Jewish wedding (Gilsig being Jewish on her father's side). The rabbi attended the ceremony, the guests smashed plates, and the newlyweds exchanged rings under the huppah (the wedding canopy is a multifaceted symbol of a home, a garment, and a bed covering).

It is worth mentioning that there was no traditional wedding march of Wagner at the event. Few people are aware that this composer is known for his Nazi ideology; therefore a symphony orchestra usually plays beautiful light music at Jewish weddings. The celebrities’ marriage lasted five years, and in 2010 the couple filed for divorce. European print media did not write about the reason for the breakup.

In this marriage, the eminent actress had a daughter, Penelope (born September 26, 2006). The actress still brings her up. Jessalyn is not embarrassed about being a single mother. The woman spends her free time together with her daughter. Gilsig has followed in her mother’s footsteps and tries to instill in Penelope a love for art. The actress has recently returned to her old hobby - painting. Jessalyn often takes the daughter to drawing lessons.

Although the actress’s main priority is her daughter, Jessalyn admits that if she meets a man soon, she can accept the courtship and date him. According to the woman, Penelope is not a stupid girl, and she need not fear that one day a stepfather can be in her life.

It is known that in 2017 Gilsig did not participate in the filming or voicing of movies.

The eminent actress devotes her time to raising the daughter, regularly posting the girl’s photos on Instagram. So, her fans can only watch the old movies of the actress and collect interviews scattered across the Internet.