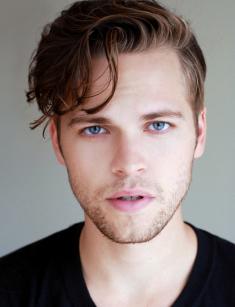 Numerous fans of the mystical youth series Supernatural, which does not give up its position since 2005, probably remember the beautiful half-angel-half-man, son of Lucifer named Jack. The young Canadian actor Alexander Calvert played this role. Few people know that the guy managed to prove himself in other, less sensational projects.

Not much is known about the early biography of Alexander Calvert. He was born on July 15, 1990, in a large and densely populated Canadian city of Vancouver. Alexander was the first child in the family. However, there was soon his younger sister in the family, Rachel. The names of the parents of the young man are unknown.

The guy was engaged in hip-hop music and dance before acting. However, when he was 15 years old, Alex's attention switched to film and television by the will of fate. To begin with, Calvert tried his hand at shooting commercials for the toy company Mattel, the American food corporation General Mills, a universal family store Kohl's. Then he had a lot of offers for work in TV series and movies.

For the first time, young Alexander appeared on the TV screen, playing a small role of a 12-year-old Greg Stillson in the fantastic series The Dead Zone. The first episode of the fourth season was called Broken Circle; it premiered on June 12, 2005.

Then the guy continued to test his strength in the filming of the series, playing an episodic role in the American comedy series Psych this time. Calvert appeared as a character Jiri Prochazka in the second season of the first episode, entitled Spelling Bee, which was released on television screens on July 14, 2006.

The following year was marked for Alexander Calvert approval for the role in the first full-length comedy about breakdance Kickin' It Old Skool. He turned into a young dancer Justin, who fell into a coma for 20 years. Having recovered, the man tried to restore the professional status and to return the love. The grown-up character was performed by the American actor, the producer and the screenwriter James Kennedy.

Also this year, Calvert appeared in 2 television films, the horror Devil's Diary and the drama To Be Fat like Me, playing small roles.

In 2010, Alexander continued to play episodic characters in the series. He turned into Evan in the 21st series of the first season fantastic thriller The Troop called Wrath of the Wraith, played the role of Sean in the episode The Other Side of the Mall (season 2, six series) of the American thriller Human Target.

Then the actor took a creative break for two years and appeared in his next project only in 2012. It was the Canadian television thriller about online stalking, Cyber Seduction. Calvert played the hero Tyler Sanderson.

From 2013 to 2016, the young actor's filmography was replenished with regular episodic images in the series Bates Motel, Scream, Arrow, The Returned. All projects are shot in the genre of thriller and drama.

He appeared several times in some of them. He appeared in the last two five episodes in a row. In 2016, Alexander finally got a role in a full-length film, released on large screens around the world, the comedy The Edge of Seventeen with a promising young actress and singer Hailee Steinfeld in the main role.

2017 was a turning point in the biography of a talented but not yet too well-known and popular actor. He was invited to take part in the favorite mystical series Supernatural on The CW as a member of the official cast, not as a guest celebrity.

Alexander played for two seasons (13 and 14) Jack Nephilim, the son of Lucifer, who was born half-angel-half-man. Calvert told in an interview what it's like to join a project that has been operating for a long time and which is loved and waited around the globe for more than 14 years:

"It's quite frightening for me. I tried to approach the work with respect and reverence, as many people grew up together with the characters and it was a long journey for them. In short, I intended to operate in a strictly working mechanism. Fortunately, fans reacted incredibly friendly and condescending. It's an honor to be an element of what people are so passionate about."

The handsome actor himself did not watch the series before filming, that's how he spoke about it:

"Yeah, it's pretty wild. I am originally from Vancouver; that is why I run across characters and references to Supernatural from time to time since the age of 15. That is why it is strange to be a part of the project, next to which I grew up and people, who I periodically saw."

The attractive young Alexander was physically unable to escape the lover's fans, joining such a favorite among young people project as Supernatural. At conventions dedicated to the series, they admit ardent love shamelessly and ask to marry them.

However, everything is stable in the personal life of the actor. He has a wife Jenna Berman, who is the actress and the model, she is from South Africa. She starred in the popular series Chilling Adventures of Sabrina from Netflix in 2018. The couple has no children.

In 2014, the actor created a profile on the social network "Instagram" together with his girlfriend, dedicated to their cat Lord Tyrion. Several tens of thousands of subscribers watch the page.

Alexander also has a personal account, where he puts mostly photos from leisure, premiere and professional photo shoots. The guy is 69 feet (177 cm) tall. He weighs 165 lbs (75 kg). He has several tattoos: the phrase Who needs you? over his knee and the infinity symbol over his other knee, as well as two crossed arrows with the inscription Strong & free above his elbow.

Fans often compare Calvert with his colleague in the series Supernatural, the popular actor and handsome Misha Collins. Alexander reacts to it understandingly:

"People send me photos where Misha and I look very similar, we look in the same direction or stand in the same position. We have similar facial expressions. I find it hard to believe because it's peculiar."

Now the actor still stares in the final episodes of the 14th season of the series Supernatural, which was released on October 11, 2018. The series will continue to be published weekly until April 2019. Alexander Calvert has a net worth of $5 Million.