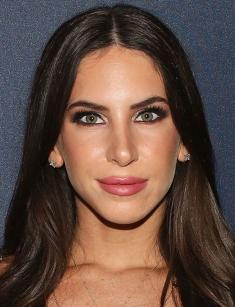 The female body is an object of admiration and art since ancient times. Numerous paintings, sculptures and cult photos focused on the topic of women body, thanks to which a famous and now printed edition of Playboy was created. The change of parameters brought fame to Pamela Anderson, and Jen Selter was the one who achieved a perfect shape independently.

The future fitness model was born in the New York town of Roslyn on the so-called infinity day, August 8, 1993, and was named Jennifer Leigh. Her mother, Jill, had to raise children alone. Jennifer has an older sister, Stephanie.

Jen spent the early years on Long Island. According to the celebrity, her childhood was rather tough. Living without a father was difficult. Moreover, the girl was often bullied by her classmates because of her appearance and, as a result, came home from school crying.

Later, Jen took some measures. To distract people's attention from the unattractive appearance, she began to wear soft bras and cropped tops. And at the age of 15, Jen decided to undergo surgery to change the shape of the nose she didn't like.

This important step became the beginning of the following changes in the body. Jen strenuously engaged in physical exercise, yoga, and proper nutrition, as she said to get rid of stress.

After graduating from high school, Selter studied cosmetology, as well as moonlighting in the gym and worked as an assistant of a plastic surgeon. People claimed that her lower outstanding part became such because of surgical intervention, but the model flatly rejected those claims. Over some time, the Selter sisters got a stepfather Bob and a half-brother Jacob.

The training gave the desired result, and Jen decided not to hide the beauty from others. Thus, in 2012 she created an account onInstagram. At first, it wasn't much success, and the young woman, having studied the secrets of blogging and its popularity, made a mini-coup.

She published photos of her butt and, creative subscribers having taken a concept of selfie as the example later called her photos belfies (a combination of the words "butt" and "selfie"). Subsequently, the stars Kim Kardashian, Nicki Minaj, Lady Gaga, Rihanna followed her style of taking such photos. Justin Bieber couldn't stay away from this fashion trend.

In 2014, a new trend on Instagram made the founder of belfies famous. The offers of cooperation with well-known magazines (Playboy, Maxim, Men's Health, Elle and many others), large agencies and companies (The Legacy Agency, Nike, etc.) showered one after another. In the same year, she was included in the list of 99 desirable women according to AskMen and became 40 out of 100 influential personalities according to Time.

The woman engaged in television and radio. She participated in the filming of popular TV-shows as a fitness instructor and shared with the audience the secrets of her own methods of exercise, allowing to achieve a super figure. Jen even demonstrated them in the shows and asked hosts to join her.

In addition to promoting and advertising fitness clothing, food, home appliances, Jen signed a contract with the Fitplan app, and also got the job of creative director in ION Collection that developed the first jewelry for sports.

In addition to the official account on Instagram, Selter created more separate pages: for her favorite pets, Gram and Brody, as well as a motivational account where she places posts, inspiring and encouraging people to do sports. Besides, there is a profile she is thinking of turning into a page with recipes of healthy dishes.

Together with her sister, Steph Jennifer, she set up Agency Selter Media which provides services in the promotion of content in social networks. The girl's plans for the future are ambitious: they are going to launch a clothing line and launch her own line of gym apparels soon.

This might be a total surprise for many fans, but Jennifer is married. Her wedding ceremony was held on November 12, 2016. Unfortunately, we don't know much about her husband except the fact that the man is the father of Jen's only child.

Before the marriage, she has been romantically linked with ‘Knicks’ player Kristaps Porzingis. But there was no confirmation from neither side, and the rumors remained rumors. By the way, this doesn't prevent her from staying a true fan of this basketball team.

On April 1, 2017, the publication of a joint photo with Jen appeared in the account of the vocalist of Big Time Rush, James Maslow. The photo was made on the beach of Tulum, with the comment " Found me a mermaid", which was the beginning of gossips about their personal lives. However, later there weren't any hints on having relationships between them.

Jen's sister and mother support her in any beginnings. They are also trying on a set of squats and lunges. And Stephie helps to manage accounts in social networks.

She posts there hot pictures showing a well-built figure of the girl with a height of 5'6'' (168 cm) and weight of 118 lbs (54 kg) wearing leggings, a swimsuit or in evening teasing dresses. For those who decided to follow Jennifer to change lives and maintain a healthy lifestyle, there is her official website which contains tips on nutrition and sports.

At the end of January 2018, the sisters were involved in an unpleasant incident that occurred on board of American Airlines, which was preceded by a 2-hour flight delay. Jennifer stood up to take her bag but was rudely asked to sit down.

An argument began, and Jen was eventually taken out of the flight by five police officers. Commenting on the incident, the star noticed:

"It was humiliating. They made me feel like a terrible person, and I did nothing wrong."

"I will never ever fly American Airlines again," she added.