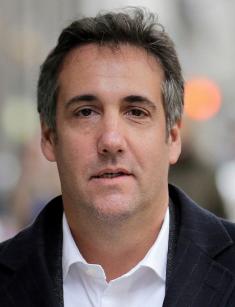 Michael Dean Cohen is an American attorney, who worked for Donald Trump from 2006 until 2018 and was a close confidant of the president. In 2008, Michael Cohen became COO of mixed martial arts promotion company Affliction Entertainment in which Trump held a significant financial stake. In the biography of the man, there are several criminal charges and political scandals.

Michael Cohen was born on August 25, 1966, in the town of Lawrence on Long Island, New York in a Jewish family of Sandra and Maurice Cohen. His father, a Holocaust survivor, worked as a surgeon, and his mother as a nurse. Michael grew up in Lawrence, graduated from Woodmere Academy, an independent school located in New York.

After graduating from high school, Cohen entered the American University, where he received a Bachelor of Arts degree in 1988. He then continued his studies at Thomas M. Cooley Law School, where in 1991 he earned his Juris Doctor degree.

He eventually became a close confidant of the president as he helped him gain control of the condominium board at Trump World Tower. In 2008, the lawyer became the Chief Operating Officer of the company Affliction Entertainment. Over the next few years, he continued to show his support for Trump.

In January 2017, the private intelligence report The Trump–Russia dossier, was published. The report claimed that Donald Trump's attorney interacted with several Russian officials in the Czech Republic. It also mentioned the fact that Cohen promised Russian officials a fair amount of money should they manage to hack The Democratic National Committee (DNC). However, Cohen denied the existence of such negotiations, which led to an investigation.

In 2016, adult film star Stormy Daniels said she was involved in a sexual relationship with Trump ten years ago. In October of the same year, Cohen negotiated a non-disclosure agreement with Daniels' attorney, Keith M. Davidson. According to the agreement, Stormy Daniels was to be paid $ 130 thousand to keep her from talking about her sexual affair with Trump.

In February 2018, Cohen said the promised money was paid out of his own pocket. He also initiated a private arbitration case against the actress on the basis of the non-disclosure agreement of 2016. However, Stormy argued that the deal was invalid, as Trump never signed it. In August 2018, Trump said that he personally paid the woman.

In 2017, Cohen organized a similar non-disclosure agreement between the Canadian fashion model and Playboy star Shera Bechard and the former fundraiser and deputy finance chair of the Republican National Committee, Elliott Broidy. The deal said that Bechard would be paid $ 1.6 million if she kept quiet about her relationship with Elliott.

In April 2018, the FBI raided Cohen's house and office, as well as the hotel room in which he lived. This led to the seizure of several business documents, emails and tax records.

On August 21, 2018, Cohen pleaded guilty to the FBI. Subsequently, he pleaded guilty to eight criminal offenses, including five cases of tax fraud. The sentencing date was set for 12 December 2018. The court ruled that he could be released on bail of $ 500 thousand. After the conviction, Cohen's lawyer Lanny Davis went on to say that his client was willing to reveal everything he knew about Trump.

On October 11, 2018, Cohen re-registered from a Republican to a Democrat.

Cohen's personal life, his life with his better half and the number of children is not a big secret.

Michael Cohen has a wife, Laura Shusterman, whose parents came from Ukraine, the couple got married in 1994. Soon after the wedding, the couple had a daughter named Samantha Blake Cohen and then a son named Jake. After graduating from high school, Samantha entered the University of Pennsylvania. Cohen often posts photos of his daughter and son on social media and writes about how proud he is of them.

Michael Cohen is known for leading a luxurious lifestyle. He drove a Porsche while he still attended College, and now has a fleet of luxury cars, including a Bentley.

On December 12, a couple of weeks before 2019, Cohen was sentenced to three years in prison for lying to Congress about Donald Trump's potential commercial deals in Russia. Besides, he will have to pay a fine of $ 50 thousand. His son and daughter accompanied the defendant.

In sentencing Cohen in Federal court in Manhattan, U.S. District Judge William H. Pauley III said that the attorney pleaded guilty to a veritable smorgasbord of fraudulent conduct, motivated by personal greed and ambitions. The judge also stated that Cohen's crimes required severe punishment. Michael replied that he was weak, ignoring questions about Trump. He added:

"I blame myself for the conduct which has brought me here today, and it was my own weakness and a blind loyalty to this man that led me to choose a path of darkness over light."

In his last statement, Cohen apologized to the people of the United States and then shed a tear.