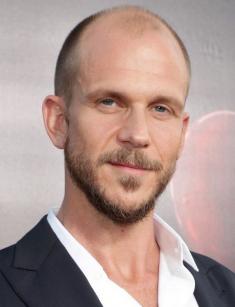 Gustaf Skarsgård's biography is an excellent example of how a person strives to achieve his goals. The actor dedicates himself to the cinema and develops his acting skills.

Gustaf Skarsgård was born on November 12, 1980, in Stockholm, Sweden. The boy was raised in the family of actors. His father, Stellan Skarsgård, is a popular Swedish actor. He portrayed Bill Turner in the series of movies about the Pirates of the Caribbean. His mother, My, is not into acting and works as a physician. Sometime later, Gustaf's parents divorced, and Stellan married for the second time.

Gustaf Skarsgård was raised in a big family. He has four brothers, Alexander, Bill, Sam, and Valter, as well as a sister Eija. Alexander Skarsgård played the lead role in the movie The Legend of Tarzan and is working on a project called Godzilla vs. Kong. Bill Skarsgård is famous for his role of Pennywise the Dancing Clown in the film adaptation of Stephen King's It. The movie premiered in 2017 and grossed $ 700 million. The actor graduated from Teaterhögskolan (Stockholm Academy of Dramatic Arts) in his hometown.

In 1989 Gustaf got acquainted with the art of cinema. The boy was nine years old when his father brought him to the set. He worked on a little-known Swedish film Codename Coq Rouge with Stellan Skarsgård in the lead role. It was the first acting experience of the future star. In the same year, a little Gustaf played in a short Prima Ballerina.

After graduating from the Academy in 2003, the actor was invited to participate in the youth drama Evil. The movie is about a guy Otto who has lived in a boarding school all his life. He had to deal with the harsh conditions of the school. Otto's life goal was getting a master's degree. The movie was nominated for an Oscar but didn't win. But Gustaf Skarsgård himself won the Guldbagge Awards. The project was a good start for Gustaf's career. The actor regularly participated in theatrical plays and films.

In 2003, Gustaf Skarsgård worked in the theater and participated in performances. One of the most significant was The Merchant of Venice. He played a Jewish merchant with excellence. Other performances were not so bright, but they helped the actor to get to the cinema.

In 2006, Skarsgård starred in the film called Förortsungar (The Children of Suburbs). The artist played the role of a musician Johan who sheltered a refugee. The actor was nominated for the Swedish the Guldbagge Awards in 2007. In 2009, the man was again nominated for this award for the role of Göran in the movie Patrik, 1,5. The film is focused on the relationship of a homosexual couple and their adopted son.

Not all of Gustaf's films were popular, but there are those that made him famous all over the world. In 2012, the film Kon-Tiki was released. The historical drama was created by Norwegian directors Joachim Rønning and Espen Sandberg. The film is about the journey of Thor Heyerdahl, who sailed 7 thousand km on a raft named Kon-Tiki. Skarsgård played the role of Swedish ethnographer Bengt Danielsson. The project was nominated for Oscar as the best film in a foreign language.

The TV series Vikings brought Gustaf Skarsgård the world fame. Johan Renck directed the first season. The series was produced specially for the History Channel and told the audience about the Vikings of the early middle ages. The series has five seasons in total, and the premiere of the sixth will be held in the autumn of 2019. Gustaf became famous all over the world thanks to the role of Floki. This role didn't bring the actor any awards, but he received recognition and love of the public, which is more important.

In 2016, the TV series Westworld premiered on the HBO Channel. It is based on the 1973 movie of the same name by Michael Crichton. The first season consisted of 10 episodes. In 2018, Skarsgård appeared in the second season as an office worker Karl Strand. This is not the key character, but it reminded the public about the actor, and the audience expects more movies with his participation.

In 1999, Gustaf married Hanna Alström. His wife is also an actress and played minor roles in Kingsman movies. The couple had no children. They divorced in 2005. The actor tries not to expose his personal life to the public, and in an interview avoids answering such questions.

The relationships of three brothers-actors, Bill, Alexander, and Gustaf, are quite interesting. Aside from family love to each other, they compete with each other. The brothers constantly brag about their success in movies, but without any anger.

Another interesting fact of Skarsgård's personal life is his fear of horses. The actor had never approached them in his life.

Now Skarsgård is working on projects that will be released in 2019-2020. The actor is not a public person, and it is unknown what he does in his spare time. There is an account on Instagram dedicated to Gustaf, but it is a fan page and doesn't belong him.

The brothers Bill and Alexander prefer wearing such brands as Adidas, Armani, J. Crew, etc. Gustaf prefers wearing hats and caps and often wears them at the events.