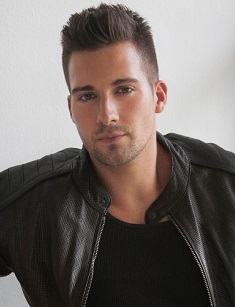 All people around the world, especially young, know this singer. Nobody can be indifferent to his acting talent too. This 28-year-old handsome young man is very gifted. He is well-built, his weight is 175lb, his height is 6’1’’. The popularity of this young man is due to his charm, great diligence, and responsible attitude to all his projects

A future popular singer was born on the 16th of July 1990 in New York. He was not the only child in a big family of Cathy Burge and Mike Maslow. Jamie was a beloved baby for his parents, elder brother Philip and two sisters Daniella and Alison. His mother’s religion is Catholicism, his father is Jewish. James considers himself Jewish too. There were English, Russian Jewish, Irish, and Scots-Irish in their family.

Later they settled in California, La Jolla, where our hero spent childhood. He studied at some schools there and received elementary education. He liked to spend summers at a camp, where he studied to work and ride the horse. He spent much time in San Diego studying performing art and played a small role in the performance under the name "La bohème" at the age of 10. He graduated from the high school of Muirlands.

When he was 6, a bad traffic accident had happened with a boy. He hurt back and head, a couple of bones were broken. It brought him almost to paralysis. Nevertheless, James recovered very quickly. After some months, he looked healthy. Hospital doctor and nurses wondered at such miraculous healing.

He started singing as early as 6. The parents noticed his inclinations and sent their child to sing in the choir. At first, he did not like it, but after two weeks, he realized the great love for music and was ready to sing all day. From that time, he had a dream to be a singer. James tried to participate in different singing and dancing competitions. As an adult, he began attending the Arts school. That school was situated in San Diego. It was very far from his house but the boy was persistent in his wish. Neither early waking up nor a long trip by bus and hard training could stop him. It was his second love after singing and he always tried to combine act and singing. James performed as an actor in several theatres but he dreamed to be a Broadway star.

In 2009, James became the members of a musical group. In “Big Time Rush” his professional singing career began. Four young guys decided to conquer the world. They had great ambitions, a lot of enthusiasm and talent.

Accidentally or not, but soon the Nickelodeon channel decided to shoot a comedy youth series under the same name. It could be called autobiographical. During two years they cast actors for parts. Maslow got one of the main roles. The film was about a group of four guys dreaming to be famous musicians. Life gave a chance to young and ambitious people to become stars. They have been invited to Los Angeles from faraway Minnesota, by good fortune. Now they have to learn, what a true friendship, real love and difficult way to success are. The main hero, James Diamond, is a narcissistic leader of the band. He is sure that successes will come and his dream will be realized.

After the first series of the film, boys woke up famous. Success, popularity, crowds of fans follow them from that time. The members of their band compose and sing their songs themselves. All soundtracks are popular now. The first band's album was released in October 2010 and was called “B.T.I.”. In 12 months, it became "gold".

The role in this film was Maslow’s star hour in his solo career. He took part in different projects. He continued to work in the music band, wrote songs and sang them. His dramatic tenor fascinated his fans. A large voice has a large dynamic scope and can express powerful dramatic situations. Sometimes his fans sneak into his hotel room. He is serious about musical development. He likes to play drums, saxophone, piano and guitar. The second album was released in 2011 and the third in 2014. Almost all musical compositions became hits. In 2014, they toured with concerts Texas and seven Latin American countries. James considers Justin Timberlake the example of a talented singer who can leave the group and make a solo career. Maslow’s dream is to record a song with him.

2014 was marked by another important event, participation in the dancing show. A well-known prima Peta Murgatroyd was his partner there. James passed the competition to the end and won the 4th place. Maslow wants to achieve success in music, acting, dancing and understand the necessity to perfect himself, work on himself and become better.

James is not really narcissistic and arrogant in life as the male lead of series Big Time Rush. He is a simple guy, loving son, brother and a good friend.

What about his family, he loves his father very much and tries to spend with him as much time as possible. He is Jewish like Mike Maslow. He celebrates Hanukkah with his dad because it is James’s favourite holiday. He is grateful to him that he saw the talent of a singer in him. Mike studied martial arts and taught his son Saito Ninjutsu.

His elder brother – Philip had a great influence on Jamie. And when he had great problems with health after a motorbike accident, his younger brother tried to help as he could. His sister Ali Thom is an example for him and he even wanted to be an architect like she.

As you understand from the above words, James has no wife. Do not believe if you see messages about his wife in media. He is not gay and likes girls. He highly appreciates their sincerity, sociability, self-esteem and no passion for money. He considers that the most attractive girls’ features are winning smile and beautiful eyes. The ability to cook is an additional plus to the picture of the ideal girlfriend. He likes Italian food, especially spaghetti. Burrito is another favourite dish from childhood. James is a great master of making omelettes.

Without exaggeration, young girls all over the world dream of a guy like James. He is very attentive and gallant in relations with women. On a date, he always turns off the phone, so that all his attention belongs only to her. He loves Miranda Cosgrove. Nevertheless, this beautiful and ironic young woman is no more than his good friend. Rumor has it that he also had dates with Savannah Chrisley. It turned out that they were only longtime friends. The name of his last girlfriend is Halston Sage. Their relationship was not long, only three years from 2010 until 2013. They broke up in 2013. She is a model and actress. Thanks to their relationship, her popularity has increased. In addition, after their breakup, she was invited to star in the Nickelodeon series. James loves Emma Watson and is crazy about her accent.

James Maslow is a fully developed young person. In addition to professional activities, he has many hobbies. The most loving ones are sports games. He likes football, mountain climbing, horse riding and surfing. The tallest mountain of the USA, Mt. Whitney, has already submitted to James. He also plays hockey and it helped him to play the role in the film. The man has got a scar from the hockey scene.

James lives in Los Angeles. From 17 he lives apart from his family. His only companion in living and in every trip is his beloved dog Fox, Alaskan Klee Kai. Dogs are his best friends and family members. The previous one, Falco, 100lb yellow Labrador, lived with him for fourteen years. There are pictures of two best friends on Instagram.

Currently, the age of idols is short-lived. One replaces the other easily. Nevertheless, James Maslow remains one of the most talented singers of today's younger generation. He has a successful solo career. He composes songs and performs them. All his compositions are real hits. He is a gifted and talented actor too. He plays in movies and TV series. Now he takes part in three films that are in production.

In accordance with the realities of today, he has his own pages on Twitter and Instagram, where he posts his pictures and talks to his fans. No doubt, he is a very handsome and attractive man. His smile is beautiful and he has his natural even white teeth. He has a strong and beautiful body. He is naked and shirtless on many of his photos. Girls like his nude and slender figure.

James Maslow is young but his personal net worth is large. He has achieved great success in music, acting and dancing. He is a great artist. He has a loving family, good friends and fans. In addition, he has a long and successful career and life ahead of him.