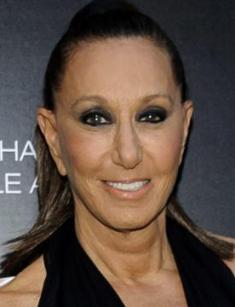 Donna Karan is one of the modern fashion queens and the co-founder of Donna Karan and DKNY (Donna Karan New York). While many designers put women on high heels and dress them with luxurious fabrics, the American expert focuses on comfort and coziness; Donna Karan is known as the inventor of the Seven Easy Pieces approach.

Donna Ivy Faske was born in the Forest Hills neighborhood, New York City, on October 2, 1948. Her Jewish parents, Helen and Gabby, worked in the fashion industry. The mother was famous as Queenie in the showroom of Chester Weinberg (the future Calvin Klein designer); the father was a tailor.

Gabby Faske died in 1951, and Helen had to bring up two children, Donna and her elder sister Gail, alone. She left the modeling career for the sake of her daughters. The would-be designer spent her childhood in Nassau County, New York. This is where the young talent showed an interest in beauty, and this place was memorized in the name of the brand DKNY.

After Helen’s first husband died, she married the model Harold Flaxman; Donna and Gail could see the fashion backstage again. At 14, Faske got hired as a salesgirl at the store of the Belgian designer Liz Claiborne.

In 1996, the young woman graduated from the Hewlett High School. Although her sports success was remarkable (she was the captain of the school teams in softball, volleyball, and basketball), Donna chose to continue her education at the Parsons School of Design: she dreamed of creating something that her mother could be proud of.

In 1968, the founder of the women’s sports clothes Anne Klein invited Karan to work as her assistant. The job absorbed the young woman so much that she quitted her studies, unwilling to resit a draping exam. Today, the designer often mentions Klein as the professional who contributed to her rise:

“Anna became my mentor and taught me the main thing: never forget you - the artist, even to design toothbrushes and hospital gowns”.

Donna’s career was developing rapidly: she headed the Anne Klein designer team and then became the company’s partner. In 1971, when the founder of the fashion house fell ill, the young American actually controlled everything.

In the early 1970s, Karan married; she was going to leave the fashion industry, but Klein died in 1974. According to her last will, 26-year-old Donna received the rights to the great empire as a loyal partner. However, other sources inform that the Japanese company Takihyo Corporation inherited the rights, and Donna and her former classmate Louis Dell’Ollio took command of the designers’ group.

One way or another, Donna devoted ten years to the brand after Klein’s death. In 1982, she presented the Anne Klein II collection that consisted of perfume and watches mostly and honored the memory of her teacher. Today, the collection remains popular among fashion lovers. Besides, Karan gained two Coty American Fashion Critics’ Awards as an Anne Klein’s designer; her name is included in the company’s hall of fame.

Soon after the presentation of Anne Klein II, the woman started considering her own fashion house establishment. In 1984, the brand Donna Karan came into being; it debuted with the collection The Essentials, also known as Seven Easy Pieces. Dynamic, busy women were its target audience.

According to the new perspective, seven items of clothes could make a woman feel elegant and comfortable in any situation, from a working day to an evening reception or meeting a partner’s parents. There are several versions of the “simple” set. One can find the official list on the Donna Karan website: a jacket, a skirt, pants, a cashmere sweater, a leather jacket, a dress, and a bodysuit. By the way, it was Karan who made bodysuits popular.

Seven Easy Pieces were revolutionary in the United States: women liked to create various looks with only seven items. In 1985, they fell in love with Donna Karan forever: the collection of non-see-through stockings and tights. Thanks to this innovation, The Council of Fashion Designers of America called her the designer of the year.

In 1989, Donna created the brand DKNY thanks to her daughter, Gabrielle. The woman told Harper’s Bazaar that Gabby did not make any difference between her clothes and those of her mother’s, just like many girls: she could wear haute-couture dresses to school without thinking about prices. Thus, Karan understood she had excluded the whole generation: she was making outfits for herself and friends but forgot about her daughter and her peers.

DKNY products were not expensive. Donna Karan became the first haute couture designer who presented mass-market clothes. She was nicknamed “the Queen of Seventh Avenue”: many ordinary girls were wearing DKNY costumes.

Accessories and perfume have always been an integral part of Donna Karan’s collections. It is impossible to imagine the American culture without her bags, footwear, glasses, even bedlinen; the legendary perfume Be Delicious known as “the green apple” because of its bottle shape is also iconic.

In 1992, men got the chance to wear Donna Karan clothes: the collection The Essentials for Man came out.

In 2004, Assouline marked Donna Karan’s contribution to fashion and presented the biographical book The Journey of a Woman; 20 Years of Donna Karan; readers could learn about the woman’s life and her sources of inspiration, as well as see pictures with the most famous looks.

In the early 1970s, the designer married her childhood friend, the businessman Mark Karan. They spent 16 years together and divorced in 1978 when Mark could no longer bear his wife’s frantic life.

Donna fell in love with her second husband, the sculptor Stephan Weiss, when she was at an engagement party with Mark. The designer confessed she was thinking about him all the time and finally persuaded herself to stop that “crazy” feeling. Stephan was ten years older than Karan.

Age did not prevent the couple from being together, though. They married in 1983; other sources claim it happened in 1978, right after the divorce with Mark. The lovers’ happiness was interrupted in 2001: Weiss died of lung cancer.

Today, Donna Karan products are available for anyone; for example, Cashmere perfume became a great hit in 2017. However, the designer withdrew from business: in 1997, she left the position of the Donna Karan CEO. When Stephan died, the woman quitted as the leading designer.

In 2007, Karan created the Urban Zen fund aimed at cultural heritage protection, education, and physical and mental improvement. Today, she spends all her time to the organization. Healthcare is a significant part of the fund’s activity: for instance, its program Urban Zen Integrative Therapy combines the achievements of the western science and eastern medicine and helps find the cure for HIV/AIDS.

The brand Donna Karan continues to present new products. In February 2019, three interpretations of Be Delicious came out: Lime Mojito, Bay Breeze, and Mai Tai. However, the designer had nothing to do with their creation.