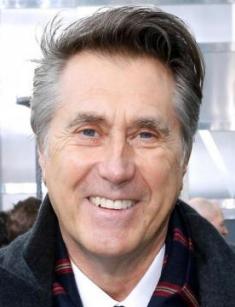 English musician Bryan Ferry presented the world with the immortal hits "Slave to Love," "Don't Stop The Dance," "The Way You Look Tonight," "Alphaville," a unique glam rock sound and the band Roxy Music. According to The Independent, he and his contemporary David Bowie influenced the generation of the 1980s significantly. Despite his age, the singer still records albums and gives concerts.

Bryan Ferry was born on September 26, 1945, in Washington, County Durham, UK. Father Fred worked on a farm and looked after mining horses. There is little information about Ferry’s early life.

In 1957, the young man began studying at the Washington Grammar-Technical School in Spout Lane, and in the morning he worked as a paperboy, delivering fresh newspapers to earn pocket money. After graduation, he entered the Department of Economics and Finance at the Durham Institute but got disappointed in the boring accounting profession. At that time, Ferry was already drawn to art.

In 1964, following his heart, the young man entered the University of Newcastle upon Tyne to study fine arts. Artist Richard Hamilton taught Ferry for one year and noticed his talent.

Bryan became interested in music as a child. His aunt, Ethel, often listened to glam pop, country, disco and swing music on the radio. Bryan especially liked Bill Haley, one of the first rock and roll singers. When the boy was 11 years old, he won tickets to his concert.

In his youth, while studying, Ferry played in the bands The Banshees, City Blues, and The Gas Board. In the last one, he worked with John Porter and Graham Simpson, future colleagues in Roxy Music. In 1969, Bryan moved to London, taught art and pottery at a school in Olympia. There he proved himself to be a good artist, having organized several solo exhibitions, and for the first time, he seriously thought about a music career.

Eno tried to compete with Ferry for leadership in Roxy Music. In 1973, after the release of For Your Pleasure, the keyboard player left the band. Ferry, who had previously been only a vocalist, had to learn to play the piano. Although his skills were not perfect, it did not affect the group's popularity. In 1975, Roxy Music gained recognition on both sides of the Atlantic, releasing the song "Love Is the Drug."

At the same time, Ferry built a solo career. The musician released cover albums These Foolish Things (1973) and Another Time, Another Place (1974), which made the UK top 5. Due to the leader’s busy schedule, Roxy Music temporarily disbanded in 1976. However, Manzanera and new members of the group, Paul Thompson and Eddie Jobson, participated in the recording of Ferry's albums.

Roxy Music reformed in 1978 to record their sixth studio album Manifesto (1979). It peaked at number 6 on the UK charts. But the most successful albums are considered the last discs: Flesh + Blood (1980) and Avalon (1982), which reached no. 1 in the UK album charts. Then the first and only single “Jealous Guy” (1981) was released, reaching no. 1 on the charts. This cover is a posthumous tribute to John Lennon, who was killed two months before the release.

In 1983, after a tour in support of Avalon, Ferry decided to disband Roxy Music. His solo album Boys and Girls (1985) reached number one on the UK chart, becoming the best-selling album in the USA that year. The songs “Slave to Love” and “Don't Stop The Dance” became real masterpieces and have remained hits for a long time.

As a solo artist, Bryan Ferry wanted to avoid touring, but Virgin Records producers forced the musician to tour in support of Bête Noire (1987). By the way, the single “Kiss and Tell” from this album was the only one in the career of the singer that appeared in the US charts.

After the tour, Ferry teamed up with Brian Eno again to release Mamouna (1994). It took them five years to record it, and during this time the musician managed to release another album Taxi (1993), which was more commercially successful than Mamouna.

In 1999, Bryan released As Time Goes By, which featured the best hits of the 1930s. The album was nominated for a Grammy Award.

Ferry reformed Roxy Music again in 2001. The group did not record new albums but toured. Manzanera and Thompson helped their leader to record his album Frantic (2002). It included tracks featuring Brian Eno and David A. Stewart, a member of Eurythmics.

In 2005, Roxy Music started recording the album, and Brian Eno confirmed the participation in the session. Ferry later stated that some collaborations would be included in his solo album and that Roxy Music would probably never release songs. Some of the tracks were released as a part of the album Olympia (2010). In 2011, Roxy Music went on a world tour to celebrate its 40th anniversary.

The Jazz Age included the hits of the 1920s. Filmmaker Baz Luhrmann was delighted with the song "Love Is the Drug" and asked Bryan Ferry to use it in the movie The Great Gatsby. In turn, the musician suggested creating several jazz pieces for the film. The material was released as a separate album. Bryan Ferry has been touring with the orchestra since 2013. The musicians performed at the Cannes Film Festival, the Coachella Valley Music and Arts Festival, Glastonbury Festival, the Chicago Theater.

Ferry gave 20 concerts in the UK and released his first live solo album, Live 2015, to support the disc Avonmore (2014). Then the musician traveled around Europe and North America for three years, giving at least 30 shows annually. In 2017, Ferry made his debut at the Hollywood Bowl.

Ferry has recently collaborated with the members of Roxy Music: backing singer Fonzi Thornton and guitarist Neil Hubbard. They toured with the singer during the Avonmore tour in 2015 and 2016.

In 1975, Bryan Ferry began a relationship with model Jerry Hall, who appeared on the album cover of Siren. Harper's Bazaar claims that this photo made Hall a world-famous celebrity. The couple lived together, and the model helped the lover to develop his music career. She starred in Ferry's videos for the songs "Let's Stick Together" and "The Price of Love." Their relationship ended when, in 1977, Hall left Ferry for Mick Jagger.

On June 26, 1982, Ferry married socialite Lucy Helmore, who gave birth to the musician's son Otis on November 1 of that year. Helmore became the model for the cover of Roxy Music's album Avalon. They had three more sons: Isaac, Tara, and Merlin. After 21 years of marriage, the couple divorced in 2003.

Children contributed to the albums Olympia and Avonmore. Tara played drums on several tracks, Merlin played guitar, and Isaac came up with the idea for the cover of Olympia. Tara also toured with his father during the 2011 For Your Pleasure Roxy Music tour.

Ferry's latest girlfriend was Amanda Sheppard, a journalist. In early January 2012, the couple celebrated a wedding on the Turks and Caicos Islands. In August 2013, after 19 months of marriage, the couple announced a divorce.

In November 2018, Bryan Ferry released his new solo album, Bitter-Sweet. It included 13 tracks that the fans of his solo career and Roxy Music already knew.

Bryan Ferry has a net worth of $50 million.