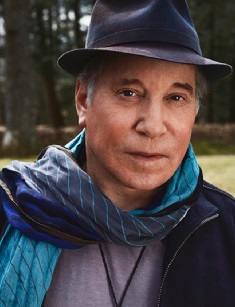 Paul Simon - is an American singer, songwriter and actor. He is a legend of American rock and pop music and innovator with a lasting career, which he started in a music duo “Simon & Garfunkel”. The singer made a big impact on music with his numerous hits. His success and contribution to music are accompanied with many awards and honors.

Paul Simon was born on October 13, 1941, in Newark, New Jersey and grew up in Forest Hills, NY. His parents were Jewish-American. His father, Harry Louis Simon, was a college professor, double-bass player, and dance bandleader. His mother, Belle Schulman, was an elementary school teacher of English.

At the age of 11, Simon met Art Garfunkel and they became best friends. Two boys agreed on interests, as both had a great passion for music. Garfunkel inspired Simon to sing and compose music. For their sixth-grade graduation boys acted in a play “Alice in Wonderland”. Boys started singing together at concerts and school events, impressing the public with their charisma. The first hit that found a response was their joint song "The Girl for Me”.

At that time Paul Simon showed his enthusiasm to jazz, folk, and blues. He began to cultivate his own original music style with his sweet voice and heartwarming lyrics.

After graduating from Forest Hills High School, Paul studied English at Queens College and graduated in 1963.

Paul's music career started early enough in the duo with his comrade Art Garfunkel at school. After their first song release, they recorded the song "Hey, Schoolgirl" in 1957, which became a single and took No. 49 position on the pop charts. Boys presented themselves under the name "Tom & Jerry", which sounded unusual. In the period of 1957 and 1964, Paul created more than 30 songs.

In 1964, Simon and Garfunkel began to work with Columbia Records. The record label offered them to change the name of the duo to "Simon & Garfunkel", which sounded simple and laconic. Their first work was LP "Wednesday Morning, 3 A.M.", which contained 12 folk songs. The album came out on October 19, 1964. But, however, this work failed, and Paul decided to make a trip to Europe. In 1965 he produced a solo album “The Paul Simon Songbook”. During his traveling, the singer met Kathy (his first wife) and fell in love with her. He felt a great desire to create and make collaborations with other musicians.

When Simon returned back in the U.S., the song "The Sound of Silence" from their first album came out as a single and became a number 1 hit. "Simon & Garfunkel" put out their second album "The Sound of Silence" in 1966. Three of the songs went to the Top 10. The duo composed the soundtrack for "The Graduate", the film directed by Mike Nichols. At this period Paul and Art felt the taste of fame, but their friendship began to fall apart.

Simon & Garfunkel presented their last album "Bridge Over Troubled Water" in 1970. The title song was so popular, that it was called a hymn of the 1960s generation. The duo broke up in 1970.

In 1972, Paul put out a self-titled solo album, that found a great response in public. Many songs from the album became hits.

In 1973, Simon introduced his new project: the pop-folk album "There Goes Rhymin' Simon". The most popular of Paul's songs were presented here. The single, "Kodachrome," was a No. 2 hit in America, and the song "Loves Me Like a Rock" was also on the top of the Cashbox charts. The video of "Kodachrome" gained huge popularity on television and Youtube.

After acting in Woody Allen’s "Annie Hall", Simon lighted up with an idea to film a movie. In 1980 he wrote and starred in "One-Trick Pony" and recorded a soundtrack, which turned out to become a single. Paul's career took off.

In 1981, Simon reunited with Garfunkel, they went on tour and released the concert album in 1982. But the singers confronted with misunderstanding and disbanded again.

In the 1980s, Simon became obsessed with African and Brazilian music. He went to South Africa in 1985, where he began recording the revolutionary "Graceland album". It was a new sound and a new vision of music that brought him success. "Graceland" won Album of the Year at Grammy Awards, and thanks to Simon, South African music appeared on the world stage.

In 1986 the video “You Can Call Me Al” about a midlife crisis came out, depicting Chevy Chase lip-syncing Simon's vocals with gestures. It was a new video that was made instead of the original one, because Simon did not like the first. The second version got MTV Video Music Award for the best male video.

Simon promoted the idea of exploring the folk music with the Brazilian album “The Rhythm of the Saints”. Many Brazilian and African musicians took part in it. The album was released in October 1990 and received excellent feedback. The lead single, "The Obvious Child," became his last Top 20 hit in the UK. The public supported Simon's experiments to popularize world music.

In 2002, Paul wrote "Father and Daughter," the theme song for the animated family film "The Wild Thornberrys Movie". The track was nominated for an Academy Award for Best Song.

Simon gave triumphant performances, including collaborations with other legendary musicians. He showed his perfect form and sense of poetry during his last concerts. Fans were surprisingly happy that he included Pittsburgh in his farewell tour. As later it was written in the social media, during the New Orlean concert Paul Simon “brought audience to their feet and to tears”. It truly demonstrates fans' admiration for the American music legend Paul Simon.

Simon showed his talents in Broadway in 1997, writing and producing the "The Capeman". The story of the musical play is based on the life of convicted murderer Salvador Agron.

Paul Simon began working on "The Capeman" in 1988 with the help of his friend Carlos Ortiz. Derek Walcott wrote the lyrics, though they had some arguing, when Simon insisted that he wanted the music to be written first, with the lyrics set to the songs.

The production of the project estimated $11 million. It was a very high budget for a Broadway show. However, it got poor feedback after 68 performances, but still scored three Tony Award nominations. In 2008, Simon and the Spanish Harlem Orchestra performed "The Capeman" at the Brooklyn Academy of Music with some of the original cast and other well-known artists. Paul is known to despise Broadway music, for it has a certain discipline. Later, after the closing of the show, Paul admitted, that he mostly enjoyed the creative process and the response of the Latino public.

Paul Simon appears a lot on television as a guest and as an actor.

He starred as a supporting character in the 1977 Woody Allen feature film "Annie Hall". He wrote and played in 1980's "One Trick Pony" as Jonah Levin, a journeyman rock and roller. Paul also appeared on "The Muppet Show". In 1978, he took part in the movie "The Rutles: All You Need Is Cash". On November 18, 2008, Simon was invited on The Colbert Report promoting his book Lyrics 1964–2008. After an interview with Stephen Colbert, Simon performed "American Tune".

Simon is a frequent guest of the TV show "Saturday Night Live". He appeared on the show as a host and musical guest 15 times. Simon performed many songs from his repertoire. One of the most humorous episodes was the one with Paul Simon and George Harrison on Thanksgiving Day. The musician performed several songs together, and Simon played his sought-after song "50 Ways to Leave Your Lover". But firstly Paul agreed to open the show performing "Still Crazy After All These Years" in a turkey outfit. He felt confused to be in that costume and asked the musicians to stop the performance.

Paul Simon was in a relationship with his first muse, Kathy Kathleen Mary. He met her during his trip to Europe at the folk club. She is mentioned by name in at least two of his songs: "Kathy's Song" and "America". The couple spent a lot of time together and traveled by bus. But Simon's growing success frightened the girl and they decided to end the relationship.

His second marriage, from 1983 to 1984, was to actress and author Carrie Fisher.

Presently Paul Simon is married to singer Edie Brickell. They got married on May 30, 1992 and are parents to three children: Adrian, Lulu, and Gabriel.

Paul is known to be a fan of hockey, basketball and baseball.

The singer donates big sums of money to major hospitals, local public schools and medical schools. He advocates policy for children's health and medical care. Paul is also a proponent of music education for children.

Paul Simon has a net worth of $55 million dollars.