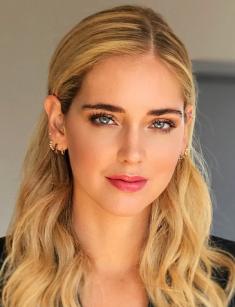 Chiara Ferragni started her career as a fashion blogger. She shared with subscribers photos of everyday images and was able to gather a multi-million audience. Now the girl is not just a blogger but also a fashion designer and a business lady. Her face managed to appear on the covers of major glossy magazines and Forbes included Chiara in the list of the most influential people, who achieved success at the age of 30.

Chiara comes from the Italian province of Cremona. She was born on May 7, 1987, and became the eldest daughter in the family of the dentist Marco and the writer Marina. The girl has two younger sisters - Valentina and Francesca. Her dad taught his daughters to a sporting lifestyle and travel. The family loves surfing and skiing.

After graduating from high school, Ferragni moved to Milan and entered Bocconi University is a private university, where she began to study law. The girl is grateful to her parents that they gave her many opportunities: to get a prestigious education, to travel around the world, to afford expensive purchases. However, Chiara underlines that success was achieved on her own.

The girl was always fond of fashion and followed the French, American and Italian, bloggers. One day she had an idea to try herself in this role. At first, Chiara posted a photo in the style of casual on the portals Flickr and Lookbook and realized that she was ready to open her judging at the growing interest of her subscribers. So, she began a new phase of her life, which was marked by the success and worldwide fame.

Chiara launched her blog The Blonde Salad in 2009, at a favorable time, when the phenomenon of fashion blogger started. If earlier the fashion news came from glossy magazines, now the audience prefers to receive information from social networks through authoritative persons.

The so-called influencers show their lifestyles to a multi-million audience and explain how to look and what to do to be successful and happy. The project of the girl became popular quickly and top designers of the world began to offer her cooperation. Valentino, Gucci, Prada and other luxury brands were ready to pay a young Internet star €4 thousand for one publication.

Chiara admits that she is not a shopper. She does not have to go shopping in search of a new dress because the whole world of high fashion is at her service. Luxury designers send the blogger new collections from which she is free to choose whatever she likes.

In 2014, Ferragni earned $8 million and became a frequent guest of festivals, fashion shows and a member of the secular party of Europe and America. She walks on the red carpet with the stars of show business. Harvard University developed a full course for students of the business faculty, where they talk about the success story of a young and enterprising blogger.

Chiara is the creative director of her brand Chiara Ferragni. Designers work under her leadership, who create models of shoes and accessories. The trademark was a winking eye with large eyelashes. It decorates shoes, t-shirts, handbags, phone cases and everything that shimmers with gold and sequins.

The company's products are available to the Russian buyer through online stores and showrooms of official representatives. The clothes and shoes of Chiara Ferragni are in demand and bright moon rovers are suitable for the harsh winter.

In her student years, Chiara started dating Riccardo Pozzoli. This relationship lasted for six years and grew beyond romantic. The young people remained business partners after their parting. At the beginning of the blog marketer Riccardo helped her friend at work: took photos, developed a strategy, collaborated with advertisers. The couple registered themselves as private entrepreneurs.

Lovers made the same tattoo on their ribs. It is the inscription luce (“light” in Italian). The girl admitted that Riccardo called her such a gentle nickname. There are several tattoos on the girl's body: a world map on the right wrist, the lioness with the cub on the left shoulder and the other inscriptions and drawings.

After the parting with Riccardo in 2013, Chiara was in a relationship with the Californian photographer Andrew Arthur. At the same time, the blogger got another friend the French bulldog, Matilda.

At the end of 2016, she began dating the Italian rapper Federico Lucia (aka Fedez). On May 6, 2017, on the eve of the 30th anniversary of Chiara, Fedez proposed to his beloved. The musician knelt during the concert, which was broadcast on radio and television. On September 1, 2018, they officially became husband and wife. They married in Sicily.

On March 19, 2018, the couple had their son Leone before their marriage. Chiara dreamed of children and she is happy to post photos of the baby on her blog. The family lives in two countries, moving between Italy and the United States. They have homes in Milan and Los Angeles.

Chiara Ferragni continues to work on her blog The Blonde Salad, which has long been an online store. She leads a page on Instagram at the same time, where she posts daily. The blogger does not accompany her photo with large texts. Her style is a lot of high-quality images with a minimum of words. Chiara Ferragni has a net worth of $10 million.

The number of subscribers of the Internet diva exceeded 16 million in 2019. They watch the fresh images of the style icon, how her child grows and learn the latest news from the personal life of the star. Ferragni continues to promote luxury brands Chanel, Dior, Balenciaga, etc., as well as her design innovations.

The celebrity works hard and travels, enjoying life and increasing her budget. On February 9-10, 2019, Chiara together with the makeup artist Manuela Mameli held a master class on makeup and self-care in Milan. The 4-hour event included a technical part with professional recommendations and entertainment, where each participant could bring the tips to life and transform.