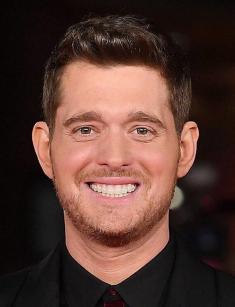 Michael Bublé is a pop-jazz singer and one of the most popular artists who performed Great American Songbook songs. He has won several Grammy and Juno Awards. The musician is famous in the United States; he is conquering European music charts.

Michael Steven Bublé was born on September 9, 1975, in Burnaby, British Columbia. The family’s financial state was unstable. The father was a fisherman, and Michael was not a spoiled kid. Jazz music was his primary pleasure.

The boy’s grandfather who worked as a plumber instilled the love of jazz in Michael: he listened to old vinyl records with his grandson. The would-be singer absorbed the magic world of fine accords and tunes. According to the artist, his professional evolution would be impossible without his grandfather’s taste.

The love of esthetics and jazz classic turned out to be a breath of air for Michael; it helped him get through the routine. Each time the grandfather gained a new record, he told the boy about its arrangement and peculiarities of songs. Michael fell in love with Bing Crosby’s, Dean Martin’s, and other musicians’ art.

Little by little, Bublé decided to devote his life to music. He attended a music school and learned how to play the piano. The child was talented: studying was easy for him, and an ear for music and a sense of rhythm complimented it. Soon, Michael started performing popular songs and creating his own music.

Bublé used every opportunity to play. In a while, the young talent discovered his pleasant voice. Michael did not pay attention to fashion and chose pop-jazz; he is still loyal to the genre.

As the vocalist turned 18, he began to work at various shows and events; the town got acquainted with him soon. When Bublé played at Brian Mulroney’s evening, the politician gave him the lifetime opportunity and invited him to work on the concert program for his daughter’s wedding.

The ceremony was a success. Soon, Michael met David Foster thanks to Mulroney; the producer appreciated the young man’s art and offered a contract.

The sudden fame seemed to be magic for Bublé who had been performing in bars for a long time. He was preparing for his music debut for seven months. In 2003, the first solo album Michael Bublе came out; it was a collection of pop song covers. Jazz lovers admired it; the album topped British, Canadian, and American charts.

Radio stations frequently aired the song “How Can You Mend a Broken Heart?” The album brought the 2004 Juno Awards - New Artist of the Year. More than two million copies were sold. The presentation happened close to St. Valentine’s day, and Michael’s romantic novellas were more than relevant.

At the end of 2003, the musician presented the Christmas album Let it Snow; the collection was as popular as the debuting work and conquered Australian music lovers quickly. In 2004, the concert album and videos strengthened Michael’s positions. In 2007, Let It Snow was re-released in the United States.

The album It’s Time became a breakthrough in the singer’s career. It reached number seven in Billboard 200; Australian and British charts gave the album number two and four correspondingly. The song “Home” was the most popular hit.

Both critics and the audience recognized the musician. In 2010, Bublé won the American Music Awards; the next year, “Crazy Love” received the Grammy Awards.

Michael has always been popular among women. The young man used to be engaged to the actress and dancer Debbie Timuss who collaborated with him in musicals. The woman inspired Bublé to create the debuting album; she worked as a backup vocalist in the second album.

The couple split up in 2005; the songs “Home” and “Lost” made a reminder about their relationship. The same year, Michael met Emily Blunt at Logie Awards; the young people fell in love. Emily became a backup vocalist in “Me and Mrs. Jones” (Call Me Irresponsible); the musician devoted the song “Everything” to his beloved one. In 2008, Blunt and Bublé broke up.

Soon, the singer met the actress Luisana Lopilato, the star of Rebelde Way; the couple married in 2011. Today, the lovers are incredibly happy. In 2013, the first son was born; 2016 was marked with the birth of the second boy. The kids are showered in parents’ love.

In 2017, Michael Bublé announced to the media that his elder son, Noah, had cancer. The child had to undergo treatment; the parents canceled all concerts and events and tried to spend as much time with the boy as possible. In a while, doctors delivered the wonderful news: Noah recovered.

Nowadays, Michael Bublé continues to be a popular jazz artist; he gives concerts in his native country and tours with accompanist musicians. The man has a personal Instagram page and regularly posts photos and writes about upcoming shows as well as the news about his artistic and social activities.

In 2018, the singer received his own star at Hollywood Walk of Fame. At the same period, the album Love Deluxe Edition СD expanded the musician’s discography. “When I Fall In Love” and “Love You Anymore” are two singles from the album.

Bublé’s compositions, such as “Sway”, and interpretation of international hits, such as “Feeling Good”, attract the audience. 2019 will bring Bublé new events and brilliant shows.