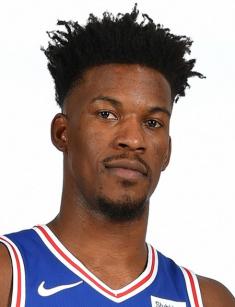 Jimmy Butler is an American professional basketball player, currently a member of the National Basketball Association (NBA). He plays for the Philadelphia 76ers as a shooting guard and small forward.

Jimmy Butler was born on September 14, 1989, in Houston, Texas. Biography of the future basketball player did not begin happily. The father abandoned the family when Jimmy was a baby. Londa Butler raised him in an impoverished house in the Houston suburb of Tomball. When the boy was thirteen years old, the woman said that she didn't want to see him. The young man stayed with one of his friends for a couple of weeks; then he would move to another.

Jimmy attended Tomball High School, where he played for the local basketball team. As a high school student, he was noticed by Jordan Leslie, a future player for Denver Broncos of the National Football League (NFL). Leslie, who played both football and basketball, challenged Butler to a three-point shooting contest. They later became close friends. Learning about the guy's situation, Leslie's family welcomed him to their house.

Butler showed impressive results when he was a member of the school basketball team, on average he scored ten points in one game in Junior high. Having been selected as the team captain in 2006-2007, the athlete approximately scored 19.9 points and 8.7 rebounds a game. As a result, the guy was named the most valuable player of the team.

After graduating from high school, the young man wasn't invited to any professional basketball team, so he decided to enroll at Tyler Junior College in Tyler, Texas. There, he performed well again, averaging 18.1 points, 7.7 rebounds and 3.1. assists a game. Later, Division I programs got interested in him.

In 2008, after receiving a sports scholarship, Jimmy started attending Marquette University in Milwaukee, Wisconsin. In his second year, in 2008-2009, on average, he scored 5.6. points and 3.9 rebounds per game and recorded a free-throw percentage of .768. Sometime later, the guy moved into the starting lineup as a junior during the 2009–2010 season, in which he averaged 14.7 points and 6.4 rebounds per game. Because of this, the young basketball player got All-Big East Honorable Mention.

In total, Jimmy Butler played 106 games for The Marquette Golden Eagles. After graduating from College, he was selected in the NBA draft by the Chicago Bulls. On December 9, 2011, Jimmy signed a contract with the Chicago Bulls. Butler played 42 games in his debut seasons with the Bulls, scoring 2.6. points per game. The team got to the playoffs, the sportsman appeared in three games, but could not score a single point.

The following season, Jimmy became a team member of the Chicago Bulls for the NBA Summer League. In four games, he averaged 20.8 points, 6.5 rebounds, and 2.0 assists. His contract was subsequently extended until the 2013-2014 season. However, the athlete did not participate in a lot of games, until one of his teammates, Luol Ajou Deng, got injured. By the end of the season, Butler had played 82 games and recorded an average of 8.6 points per game.

On 30 October 2013, his contract was extended for another year. In the game against the Orlando Magic, Jimmy set a new record for the Chicago Bulls, being active on the field for 60 minutes. On June 2, 2014, he was named to the NBA All-Defensive Second Team.

In the 2014-2015 season, Butler performed a significant role in the Chicago Bulls' gameplay. He scored 32 points against the Denver Nuggets and 35 points against the New York Knicks. On April 20, the basketball player set a playoff career high for the second straight game, scoring 31 points.

On July 9, 2015, the Chicago Bulls offered Butler a five-year contract for $95 million. The agreement reserved for him the right to leave after four years. On February 5, 2016, during the game with the Denver Nuggets, Jimmy stretched his left knee. Because of this, he was absent for almost four weeks and eventually missed the 2016 All-Star Game.

The basketball player returned on March, 14 in the game against the Toronto Raptors. In the last game of the season, the Chicago Bulls played against the Philadelphia 76ers; Butler scored triple take with 10 points, 12 rebounds, and 10 assists. In his last season with this team, Jimmy played spectacularly. He contributed to the victory during the opening of the season in the game against Boston Celtics, on October 27, 2016, scoring 24 points.

In 2015, Jimmy Butler went out with a woman named Charmaine Piula, who was of Polynesian origin. She is a marketing representative of Auto-Owners Insurance, loves running, traveling, shopping and taking long walks. After a while, the couple broke up as both were career-oriented people who didn't have time for a relationship.

For a long period, Butler talked about his admiration for actress Shay Mitchell, who became known for her role in the television series Pretty Little Liars. In 2016, they were regularly seen together, which is why there were rumors about them having an affair.

Today, everyone knows little about the personal life of the basketball player, from the interviews with the young man it is clear only that he doesn't have a wife and children yet.

A frequently searched question on the Web is Butler's measurements. The athlete's height is 6 feet 8 inches, and his weight is 232 pounds.

The basketball player is friends with Mark Wahlberg; they even spent a holiday together in Paris.

Now, besides playing professional basketball, Jimmy actively engages in social media. Millions of followers see his new photos on Instagram, as well as read his thoughts on Twitter. On the latter, Butler writes both on personal and professional topics, once, for example, he praised his teammate, Derrick Rose for playing extraordinary well.

On Instagram, he does not hesitate to write compliments under the photos of gorgeous women, which sometimes leads to getting comments from the women's husbands or boyfriends.

On November 11, 2018, the Philadelphia 76ers traded Jimmy for Dario Šarić, Robert Covington, Jerryd Bayless and draft pick of the second round in 2022. The basketball player will spend 2019 on the new team also of the NBA as a shooting guard and small forward. Only time will tell how this move will affect the athlete's career.