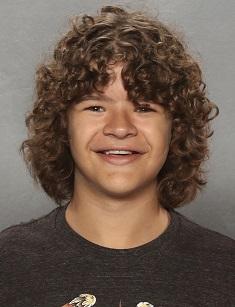 On September 8, 2002, in the suburb of the great New York City, New Jersey, Matarazzo family celebrated the birth of a boy they named Gaten. His mother, Heather Matarazzo, and his father, Gaten Matarazzo Sr. have two more children, Carmen and Sabrina. Gaten Matarazzo's brother and sister also dream of becoming a part of the film industry, currently starring in TV commercials. In several interviews, Gaten talks about his big happy family and how they all are always glued together, helping each other out in difficult times and adversities.

Gaten Matarazzo was born with a condition known as cleidocranial dysplasia (CCD), which affects the development of teeth as well as bones. Even though his condition was mild, it meant that Gaten Matarazzo had to learn to grow in this world with under-developed collar bones and teeth. Gaten always felt grateful for the fact that he did not have to go through severe bullying at school. Of course, some silly kids laughed at him and mocked him, but there was only a couple of them. Matarazzo never gave too much attention to them, from early childhood showing the strength of will and positive approach to life.

When Gaten was only little, he knew he wanted to connect his life with art. Gaten Matarazzo's parents signed him up for as many auditions as possible. At first, the boy faced refusals because of his weird looks, but one day, Broadway opened its doors for the kid. He was entrusted with a part in the production 'Priscilla, Queen of the Desert.' Besides his acting skills, Gaten Matarazzo managed to prove to the audience that he had a talent for singing, portraying Benjamin.

In 2014, Gaten continued his Broadway journey, participating in a sung-through musical, Les Misérables, based on the classic novel by Victor Hugo. In Les Mis, Gaten Matarazzo got to perform the part of Gavroche. Gaten managed to portray the boy, whose name became a synonym for a street kid, perfectly. Gavroche in Les Misérables chose his own name, and Gaten, like him, determined his own fate and did everything to make directors notice him. And even though because of his condition he had to face some obstacles on the way, he succeeded in his attempts.

In 2015, the creator of The Blacklist, an American crime thriller television series that the viewers have been enjoying for seven seasons now, invited Matarazzo to play Finn in "The Kenyon Family (No. 71)" episode.

Even though this part was insignificant, it worked wonders: after it, Gaten Matarazzo managed to go through the audition for Stranger Things successfully. This American science fiction horror web Netflix television series turned the boy's life around. When the Duffer Brothers came up with the idea of Stranger Things, they could not have imagined that the show, made in old-school style, would reach such high results. Many people compare it with the legendary Twin Peaks, but the mysteries are solved not by professional FBI agents and police officers, but by a bunch of school kids. They, like Ghost Busters, at first have absolutely no idea of what they are doing.

The Duffer Brothers not only took Gaten Matarazzo to play the role of Dustin Henderson but made his character be more like Gaten himself. Dustin also lives with CCD and in the pilot episode of the television series, tries to explain it to a school-bully, who asks Henderson to "do the shoulder thing," that is, to bring his shoulders very close together, which Dustin can do because he has no collar bones. The chubby naive boy earned the love of the audience with his funny, silly sayings and preparedness to stay by his friends in hard times.

On the set of Stranger Things, Gaten worked together with brilliant Winona Ryder, Millie Bobby Brown, Caleb McLaughlin, Natalia Dyer, David Harbour, Charlie Heaton, Noah Schnapp, Finn Wolfhard, and Joe Keery. The creator of the show did not cast any already famous actors except for Winona Ryder but preferred to work with "new faces" and build popularity from scratch. It proves that the series earned its fame with the breath-taking plot and fantastic performance of the aspiring actors, and not with names known everywhere around the world.

After the first season of the show, Gaten Matarazzo did not get to enjoy a long vacation, as the fans were chanting that "the show must go on." The second season of the series set in the 80s aired on Netflix in October 2017, in which Gaten continued to develop his character. Dustin's phrase "Purr, no one can resist them pearls," referring to his new fake teeth, became a meme that spread around the Internet. In the second season, the things become even more complicated.

The boys, along with the new-comer, Max (portrayed by Sadie Sink), are trying to save the world and destroy the alternative evil universe, The Upside Down. At the same time, they seek to find their best girlfriend, Eleven (played by Millie Bobby Brown). For his role in the old-school television series, Gaten Matarazzo received Screen Actors Guild Award in the category Outstanding Performance by an Ensemble in a Drama Series, as well as the Shorty Award as Best Actor.

After the first season of Stranger Things, Gaten Matarazzo felt a shower of fame pour on him. Millions of fans want to know how Garten Matarazzo leads his life, where does he live and what does he do in his spare time. Like the majority of teenagers these days, Garten Matarazzo loves to communicate with his fans through social media. He has accounts on Twitter and Instagram, as well as Snapchat, where he posts funny videos and amuses his fans.

Even though he is only 16 years old, journalists and fans are already interested in his love life. They are keen on spreading rumors about Gaten Matarazzo dating Millie Bobby Brown or Sadie Sink. However, they are just good friends working together. In 2018, Gaten Matarazzo started dating Lizzy Yu, an aspiring theatrical actress. In an interview, Gaten opened up about their relationship with his girlfriend. Gaten's family is fond of the young girl, and the couple enjoys spending low-key weekends together at home, playing pool.

Despite his young age and silly behavior on the surface, Gaten Matarazzo, who has a net worth of $2 million, can be extraordinary serious and passionate when it comes to social issues. Gaten Matarazzo doesn't treat his genetic condition as a disease or disability and urges others to do the same. He seeks to raise awareness about CCD on social media and in the entertainment industry. Gaten launched his line of T-shirts and directed all the proceeds from selling them to CCD Smiles. It is an institute that financially supports patients with cleidocranial dysostosis who go through oral surgeries.

Gaten Matarazzo uses Instagram and Twitter not only to post funny memes, pictures with his girlfriend, and singing videos, but also to inform his fans on how they can donate to CCD Smiles to make the life of people with this condition more comfortable.

In 2017, Gaten Matarazzo participated in Lip Sync Battle, a musical reality competition. Now he is busy working on the third season of Stranger Things.