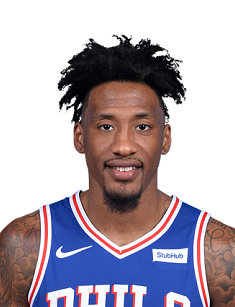 Robert Covington, an American NBA basketball player, now is playing for the Minnesota Timberwolves on the position of the small forward. Covington's career started when he was a student. The player has come to prominence at once. Have you ever wondered how the sportsman reached such results? It's high time for us to introduce the player's biography to you!

Robert Covington was born on December 14, 1990, in Bellwood, Illinois, to Dennis and Teresa Bryant. The family introduced the sport to the son: in the very childhood future star became interested in basketball: being a high school student at the Proviso West High School in Hillside, Illinois, he played for the high school basketball team in local championships. His average results were 18 points, 11 rebounds and 7 blocks per game. Covington was an outstanding student due to his skills and the way of playing.

Robert had to miss 10 fights in the next season because of injury.

Having graduated, Covington announced the decision to apply for the participation in the NBA draft 2013. Unfortunately, he wasn't chosen by any team there. In July 2013, the player joined the Houston Rockets for the 2013 NBA Summer League. On July 15, 2013, the player signed a contract with the team. His debut NBA match was on January 18, 2014. In the first season, generally, he played for the Rio Grande Valley Vipers.

In June 2014, Robert joined the Houston Rockets in order to take part in the NBA Summer League. On October 27, he was excluded from the club.

On November 15, 2014, the player joined the Philadelphia 76ers: they sighed a four-year contract. His debut game for the club was on November 14: it was the match against the San Antonio Spurs. On December 3, in the fight against the Minnesota Timberwolves, he recorded 17 points, the best result in his career. Two days later, he set a new career record of 21 points in 28 minutes. The next day the player improved the result again: in the win over the Detroit Pistons, he scored 25 points in 29 minutes. On March 25, playing against the Denver Nuggets, Covington scored 25 points again. On April 8, in the fight with the Washington Wizards Robert set a new career maximum of 27 points. Five days later, Covington made 25 points again.

At the beginning of the 2015-2016 season, Covington got injured and missed several games. Having recovered, he showed the best season stats: in the loss to the Houston Rockets, the sportsman scored 28 points and 8 steals. On December 1, the player helped the Philadelphia 76ers defeat the Los Angeles Lakers: he made 23 points. On February 10, Robert set a new record of 29 points in the game against the Sacramento Kings. The player went on improving results: on April 8, a new career maximum was set: the sportsman scored 30 points in the match with the New York Knicks.

On December 14, 2016, the player made a season maximum of 26 points and 12 rebounds in the match against the Raptors. In the next game (which was against the Portland Trail Blazers) he scored 22 points what led the Philadelphia 76ers to the victory. On January 19, 2017, the sportsman made 21 points and 12 rebounds in the loss to the Bulls. In Covington's last game in the season he scored 13 rebounds. On March 31, the player injured his knee and stopped playing till the final of the season.

After the treatment, he started a new season with playing in the match against the Wizards. So, on October 18, 2017, Robert Covington got 29 points. On November 17, the player signed a four-year, $62 million extension with the Philadelphia 76ers. In May 2018 the player was named to the NBA All-Defensive First Team.

However, Covington played only 13 games for the Philadelphia 76ers: the team traded the player and his colleagues Jerryd Bayless, Dario Šarić to the Minnesota Timberwolves on November 12, 2018. In exchange, the 76ers got Jimmy Butler and Justin Patton.

Two days later, Covington played his first game for the Timberwolves. In the match against the New Orleans Pelicans, he recorded 13 points and 7 rebounds. On December 31, in the other fight with the New Orleans Pelicans, the player sustained a bone bruise on his right knee and would miss 23 matches. On March 1, Robert decided to get back to playing but felt the pain again and was ruled out for the rest of the season. According to the Rotoworld fantasy sports news, on April 1, the player underwent successful surgery, now his health is in no danger and he is already planning to go to the training camp.

In 2018 Robert Covington started dating Kleeshi, an Instagram star with more than 8,000 followers. When Robert was traded to the Minnesota Timberwolves, he had to move to another state. Without lingering a minute, his girlfriend left her model career and went on a trip with him. The couple is still not thinking about marriage and children.

In 2018 Covington was mixed up with love triangle. So, Jae Crowder, an American professional basketball player for the Utah Jazz accused the mother of his daughter Dana Lambert of cheating with Robert with reference to their photo in Social Media. The scandal was noisy; both sides posted severe insults on Twitter. The accused woman denied all the allegations saying that Covington was her good friend.

In his career, Covington has got lots of awards and nominations. Being a high school student, he got the title of the West Suburban Conference Player of the Year after leading Proviso West to the West Suburban Championship. Playing for the college basketball team, Covington was called to the Ohio Valley Conference All-Newcomer team and earned Mid-Major Freshman All-America honors from Collegeinsider.com.

Several times the player has got the title of the NBA D-League Rookie of the Year.

Robert is good at defense: he won the Defense Wins Championship in 2017.

When Covington became popular, t-shirts and jerseys with his name became at high demand.

There's no availbale information about Robert Covington's net worth.