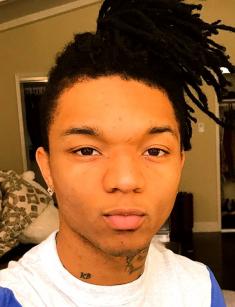 Swae Lee’s life is full of energy and potential. The young man has been working hard on his success and overcame all the ordeals on his own. Today, Khalif Brown continues to develop his talent and the ability to inspire fans.

Khalif Malik Ibn Shaman Brown was born in 1994 in Inglewood, California. The boy grew up with two brothers, Aaquil and Michael. The children’s father left the family soon after the youngest boy was born, and the kids stayed with their mother. Bernadette Walker served in the US tank corps; she was a strict parent.

The family had to move often due to the mother’s duties. At some point, they lived in Texas at the territory of a military base. The children endured this time. Soon, the woman took them to Tupelo, Mississippi. This is where Bernadette met her next husband. The stepfather had to sell drugs to earn the family’s living. The kids loved the man: he made a loving father for them.

Swae Lee began his music career with the brother Aaquil (Slim Jxmmi). As school students, the young men took an interest in music and recorded their first beats in FL Studio program. In 2010, 16-year-old Khalif and his brother founded the group Dem Outta St8 Boyz and created the track “Party Animal” with a music video. This work brought the first popularity: school students and people in the neighborhood knew them.

Khalif could create high-quality sounding; he was accumulating the necessary experience of recording sons. He realized that it was vital to move on and left the mother’s house together with Aaquil. The brothers lived in an abandoned house and paid only for electricity; cold water was their only amenity.

Little by little, the Brown brothers started organizing parties and showing their talent to the local youth. At this period, the rapper P-Nasty who worked for EarDrummers noticed them and offered to move to Atlanta and meet the director Mike WiLL Made-It. The young men accepted the invitation. They lived in P-Nasty’s basement and recorded music there. Unfortunately, their tracks were too green and indistinct; the musicians came back to Mississippi without having met Mike.

As Khalif and Aaquil returned, they rented a house and worked part-time to spend evenings on music. The brothers gathered people together again. The story repeated itself: the rapper P-Nasty heard the brother’s song “I Do” and appreciated their potential; once again, he invited them to Atlanta. The brothers finally met the company director Mike and settled in his basement.

Although the musician ignored the young men’s works for a while, he eventually realized that the brothers had a potential and began to promote them. Khalif debuted supporting the popular rapper Future; the brothers’ lives changed. In 2014, they named their duet “Rae Sremmurd” which was the name of the label “EarDrummers” spelled backward.

The musicians created the song “No Flex Zone” and presented a music video for it. “No Type” followed soon; it received 700 million views on YouTube in four years.

Swae Lee has not left the group; the musicians make top-quality music. Four years of the brother’s collaboration brought several hits; they also had the opportunity to work with American celebrities, such as Nicki Minaj, Kodak Black, Gucci Mane. Besides, Khalif presented solo albums and songs. In March 2015, the first song without Slim Jxmmi, “Drink on Us”, was released; Mike WiLL Made It, Future, and The Weeknd contributed there. The same year, in September, Swae Lee and Wiz Khalifa recorded “Burn Slow” that became number 83 in Billboard Hot 100.

In 2017, Brown had the chance to collaborate with French Montana; the rappers created the song “Unforgettable”, the only solo work of that year. In comparison, 2018 was marked with many tracks. One of them, “Close to Me”, was recorded with Ellie Goulding and the American DJ Diplo.

In October 2018, Swae Lee and Post Malone pleased their fans with the song “Sunflower”; the animated video about Spider-Man appeared on YouTube. In November, the Lil Pump channel published the music video “Arms Around You” with Maluma, XXXTentacion, and Swae Lee.

There are many rumors and unclear details about Khalif Brown’s personal life.

The young man has no wife or children. He dates the Instagram model Marliesia Ortiz.

Nowadays, the musician is working on new music. Khalif posts photos on his Instagram: he spends much time in a recording studio. By Christmas, Brown presented the solo track “Christmas at Swae’s”.

The majority of the pictures pertain to the artist’s love of music: the rose with notes, the violin clef in the blue sky, the winged cassette. Swae Lee is going to have more tattoos in the future.