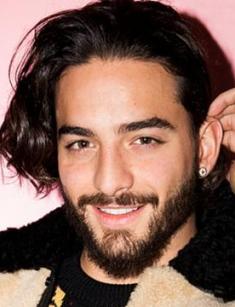 Juan Luis Londoño Arias known as Maluma is a Columbian singer. He earned his fame in 2010, and Latino-American critics call him one of the most popular artists. Maluma has collaborated with international celebrities: Shakira and Ricky Martin.

The future star was born on January 28, 1994, in a provincial town, Medellín. The boy grew up with his elder sister, Manuela.

Juan was active and full of energy; he liked soccer and showed much success in the low divisions of Atletico and La Equidad; people expected him to become an athlete. Sports were important for young Maluma: he was also fond of ping pong, volleyball, and chess.

However, the young man chose music: it was equally significant for him. Arias’s voice was pretty good, and he actively participated in school events as well as practiced at home; the family realized this was not a mere hobby. The young talent was also a songwriter, and girls appreciated that: he created lyrics at his friends’ requests.

The mother suggested her son should take up music classes; the road to success began. When Juan was 15, he created the song “No Quiero” with his friend. At that moment, Maluma’s uncle gave him a birthday present: he could record a song in a professional studio. The coincidence was lucky for the would-be celebrity: producers noticed him thanks to his songs.

It was necessary to choose a sounding and memorable stage name. The family was Juan’s primary value, so he connected the first syllables of his mother’s, father’s, and sister’s names: Marlli, Luis, and Manuela.

In 2010, the artist took the first career steps and found the first fans. Maluma recorded several singles one of which, “Farandulera”, proved to be a great hit on the local radio. Sony Music Colombia offered the musician a contract and the debuting album recording. The next song,”Loco”, was released in this studio.

The disc Magia came out in 2012; it was accompanied by the single and the music video “Obsesión” set in a railway station. The model Lina Posada portrayed the main character. The songs “Miss Independent” and “Pasarla Bien” from the same album reached the top three in the national chart and made Maluma a popular artist.

In 2014-2015, the producers of the Columbian version of The Voice Kids invited the young man to the project as a judge and mentor. Maluma shared his own experience and helped his team create bright performances.

2015 brought PB.DB The Mixtape followed by the second full-fledged album Pretty Boy, Dirty Boy. The singer experimented with reggaeton, pop music, and city styles. The disc was notable for the hits “Borró Cassette”, “El Perdedor”, and “Sin Contrato”. It earned the brilliant status in Columbia and became the top one in the US sales. The success inspired Maluma; he designed and launched his own clothing line.

2016 was marked with the prestigious contest Lo Nuestro; the artist devoted his song to Carlos Vives. Besides, he sang “Desde esa noche” in a duet with Thalía. The next year, the musician was a jury member at a music festival in Chile. This event happened at the same time as the collaboration song with Shakira, “Сhantaje”, came out; fans loved it. The duet with Ricky Martin followed.

Maluma’s contribution to music is difficult to be overestimated. He has won many significant prizes; colleagues and fans respect him. The singer was offered to create the song for the FIFA World Cup 2018. The artist had an international tour and gave many concerts; the public always welcomed him warmly.

Maluma is one of the most famous and sexiest young musicians in Columbia; glossy magazines publish his pictures, and fans scrutinize every Instagram post. Many girls try to understand whether the man is single. There were speculations about Maluma’s romance with the actress Eiza González, but no confirmation followed.

The artist is not married and has no children. According to Aries, a significant relationship and family would limit his career opportunities, so he does not want to get married in the nearest future. Maluma does not like to share personal moments; one can see photos with parents, promo videos, and concert pictures on his social network pages. The paparazzi are not allowed in his life.

2018 brought both pleasant and unpleasant moments. When the artist arrived in Russia, where the World Cup was held, thieves broke in his hotel room and stole jewelry.

In November 2018, Maluma received the Latin Grammy Awards for Best Contemporary Pop Vocal Album. The artist devoted his achievement to his nearest and dearest as well as the charity fund El Arte de los Sueños he had founded.

Fans continue to love their icon and listen to his present-day hits “Сlandestino”, “El Prestamo”, and “Felices los 4”. The musician is working on a new album, visits social events, works as a designer, and tries himself as an actor.