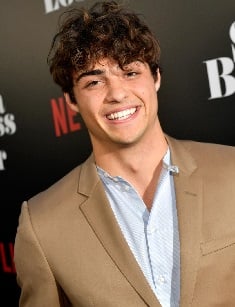 The appearance of a real macho, an attractive smile, a gentle look of the brown eyes… This all words about actor Noah Sentineo. Everybody fell in love with him after his leading roles in the movies To All the Guys I Loved Before and Sierra Burges - a Loser. Becoming a star of teenage romantic comedies, he successfully debuted in the TV series “Fosters” and Hollywood projects.

Noah Gregory Sentineo was born on May 9, 1996, in Miami, Florida. Mother Kelly Janel is a yoga instructor. Father Gregory Vincent Sentineo is a pastor but later became a film producer. In the pedigree of Noah, there are ancestors of different nationalities - Germans, Dutch, Italians.

The boy grew up in the Boyton Beach with his older sister Taylor. He has studied at the BAK School of Art, and then at the Boca Raton Community High School. Here, being in high school, he became interested in football and was considered as a promising player.

When Noah was eight years old, Taylor went to audition at the John Robert Powers Agency. The boy went to the company too, but because of boredom. However, he was interested in acting classes. Noah gladly began to learn the basics of this art form instead of football.

Soon he was able to apply this knowledge in practice. In 2009, Noah received a role in the family comedy Golden Retrievers. His hero, 12-year-old Josh Peters, after recognizing his father as bankrupt, goes in search of treasure, the boy is helped by girlfriend Ana and faithful dog Bosco.

Then a talented young man was appointed to the role in the children's comedy Turkles about the adventures of young naturalists from the camp “Loggerhead.” And when in 2012, Noah received an offer to play in the episode of the Disney series Austin and Ellie, so he persuaded his parents to move to Los Angeles.

His career on Disney channel with the role of David in the Austin and Alley episodes. Noah has appeared in episodes of the projects Dance Fever, Jesse since 2013, and the most notable role of this period in the young man in the television movie How to create the perfect guy (2014). Noah played Jayden Stark - one of the students of the school where the comedy takes place.

Finally, in the acting biography of Sentineo, a role appears, which has become a harbinger of success. Colorful guy approved for shooting in the series Foster. It was a substitute role - Jake Ti Austin left, playing Jesús Foster left the project two seasons later. In this regard, it was required to find an actor suitable by type and age. Noah was at the right time in the right place; his southern "texture" perfectly fit into the image of the character.

The series Foster started on ABC in 2013. The story of a lesbian couple, which raising five children, drew millions of viewers to the TV screens. Jesus Foster is one of the adopted children. The guy suffers from a lack of attention, as a result of which his hyperactivity develops. In recent seasons, Jesus has had an accident and has been chained to a hospital bed for a long time.

The actor admitted that he had read a lot of scientific literature, which helps to understand how a person behaved when he received an extensive head injury. Centineo was at the project until the end in 2018. After this, his professional life abruptly changed towards fame, recognition, and success.

That year, the guy plays in a romantic comedy for teenagers “To All the Guys I Loved Before,” which premiered on Netflix. Noah's hero is Peter Kavinsky, one of the lovers of the main character, Lara Jean, a loving and romantic person.

Every time, falling in love, she writes a letter to the object of her feelings but does not send, hiding it in the table. And once, when letters have accumulated a significant amount, it suddenly gets to their addresses. And Lara finally realizes who truly loves her. Centineo's partner was charming Lana Condor - an actress of Asian nationality.

Do not have time to wither away the success of this film, as Noah again appeared by acting the role of a romantic hero in a similar genre in the movie "Sierra Burgess - a loser."

The main heroine of the comedy is a girl Sierra, she is an excellent student, but not attractive at all. Despite this, she seeks to become a popular girl in school and win the heart of Jamie (Noah Centineo).

Two leading roles one by one in commercially successful projects and another work on TV in the Marked brought Noah long-awaited popularity. The status of a rising star brings him to various TV shows: Chris Jenner herself invites the guy to his evening program.

Looking at Noah's face, you can probably notice that he has a mysterious scar. But it even makes more excellent his romantic appearance. The best fan theme for discussion is Noah's personal life. There were a lot of assumptions about who is his girlfriend. Maybe Lana Condor from To All the Boys I've Loved Before, maybe Camila Cabello from video clip ''Havana'', where actor took part too.

However, it is just gossips. All these girls are friends for Noah. But he admitted he wants to get acquainted with Selena Gomez. Because Noah thinks she is the coolest girl in the world.

The actor had a few relationships (with actress Angel Apple, with Kelli Berglund and even with Instagram-star Lauren Kolodin). During it, he was making a romantic surprise for his lover. For example, he organized a little travel adventure to another town.

That's all says about his hazel with roles which he plays. And status "lady-killer" was deserved him. But we have good news for fans - Noah is still not married. Surprisingly, Noah is bisexual.

At present, Noah's net worth is estimated at ‎$2 million.