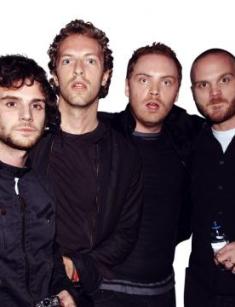 The British group Coldplay earned its fame in 2000 thanks to the second single “Yellow”: it topped all British and American music charts. The album Parachutes could boast great popularity: more than 80 million copies were sold.

The future group members met at a college fraternity house in London. Chris Martin and Jonny Buckland began to communicate in the first weeks of their studies, in the fall 1996. The friends dreamed of organizing their own music group. Soon, they met Guy Berryman.

In 1997, the newly founded band gave some performances in London clubs. The vocalist’s school friend, Phil Harvey, became the young men’s manager and continued his work for two years, until the second studio album recording.

The Coldplay members did not plan to be artists. The vocalist, Chris Martin, grew up in a Christian family, sang in a church choir, and wanted to become a Historian. The future guitarist Jonny Buckland was interested in astronomy and mathematics in his childhood. The bass guitar player Guy Berryman was going to work as an engineer.

In the first half of 1998, the group finally formed: the anthropology student Will Champion joined the musicians. The talented young man could play the keyboard, acoustic, and bass guitars. Although he had never played the drums before, he mastered it quickly.

The group was called Pectoralz and then renamed into Starfish. The present-day name, Coldplay, came from Philip Horky’s poem “Child’s Reflections, Cold Play”. The English musician Tim Rice-Oxley combined the last two words; however, this name seemed too depressing for him, and he gave it as a present.

Chris invited Tim to the group to play the keyboard, but Rice-Oxley was occupied with his own group Keane.

As soon as the band graduated, they signed a contract with the British company Parlophone.

The frontman Chris Martin used to call the group’s genre limestone rock to oppose it to hard rock.

On May 18, 1998, the group released the mini-album Safety on their own; the majority of the copies were sent to various companies, and some of them were given to the young men’s friends. There were 50 copies altogether. At the end of the year, Fierce Panda invited Coldplay to record their songs. It took four years to complete the mini-album Brothers & Sisters. The release took place in spring 1999; the songs earned popularity quickly.

Following the first success, Coldplay performed at the Glastonbury Festival and began to create the next mini-album; 5000 copies of Blu Room were presented. The working process was challenging: the soloist and the drummer had a conflict, and the latter was going to leave. In a while, Chris apologized to Will, and the artists made amends.

November 1999 was significant for Coldplay: the work on the full-fledged album started. The first single “Shiver” became number 35 in the British top 40 chart. The same song marked the MTV debut.

The release took place in July 2000. Parachutes topped the UK chart and provoked criticism: some people emphasized the similarity with Radiohead’s The Bends and OK Computer. Nevertheless, the singles “Yellow” and “Trouble” remained immensely popular. The company estimated that 40 000 copies would be sold; in fact, it was more than 1.6 million copies until the end of the year.

The group earned much recognition in Europe and then decided to conquer the United States. The debuting album release took place in November 2000. Coldplay gave concerts in American clubs and had a show in Vancouver. American TV channels began to invite the musicians. The endeavor did not go in vain: the album became platinum and won Grammy in 2002.

In October 2001, Coldplay started working on A Rush of Blood to the Head presented in August. The promotion campaign took 18 months and numerous shows. The first song of the album, “Politik”, was written after the tragedy on September 11, 2001: according to Chris, the lyrics and music just dawned upon him in the middle of the night, and he tried to play it.

The track was calm, but the musician called it the loudest song of the group later. “God Put a Smile upon Your Face”, “The Scientist”, “In My Place”, and “Clocks” were the most popular hits. The supporting tour was marked with the concerts in five continents. Coldplay was a headliner at the Glastonbury Festival, V2003, and Rock Werchter.

As the group was recording the third album, X&Y, the musicians changed the permanent producer Ken Nelson and invited Danton Supple. The new work came out at the beginning of summer 2005; 8.3 million copies were sold by December. It was the bestselling EMI album in 2005. Moreover, X&Y topped music charts in 28 countries.

In the fall 2016, Coldplay started recording the fourth album. “Violet Hill” and “Viva la Vida” were the first hits that went viral on the Internet. The group was accused of stealing the latter composition, but no evidence followed.

When Coldplay had another tour, the relationships among the members were tense. The soloist even assumed that Viva la Vida or Death and All His Friends could become the last one in their discography. However, 2011 brought the new album, Mylo Xyloto, and the artists continued to collaborate.

The group drew their attention at the acoustic sounding; December 2015 was marked with A Head Full of Dreams. The music video “Adventure Of A Lifetime” with monkeys was presented.

Fans all over the world perform the group’s songs and play the ukulele. Coldplay has received many prizes; Rolling Stone called it the best artist and the best band of the year. The band’s second album was number 466 in the magazine’s 500 Greatest Albums of All Time.

At the end of January 2016, the group surprised its fans by the music video “Hymn for the Weekend”. According to the frontman, he realized that the group had no song for nightclubs. Chris began to think how such a song would sound, and the hit appeared. The music video by Coldplay and Beyoncé had more than 150 million views on YouTube within several months.

In June 2018, the Coldplay vocalist bought a small theater in Malibu for $4.45 million. The building used to be a church and a recording studio. It was not announced what the musician was going to do there.

As for Martin’s personal life, he used to be married to the actress Gwyneth Paltrow; they spent eleven years together and divorced in 2014. Two children were born in that family: Apple (born in 2004) and Moses (born in 2006). Gwyneth is vegetarian, and she taught her ex-husband the same eating habit; however, Martin came back to eating meat when he broke up.

Further on, the Coldplay frontman dated the actress Dakota Johnson; the news about their split-up came in summer 2019.

In summer 2017, the group had a tour to support their recent album.

Nowadays, Coldplay continues to be popular; it had six nominations for Billboard Music Awards 2018. One can learn the latest news about the band on the official website.