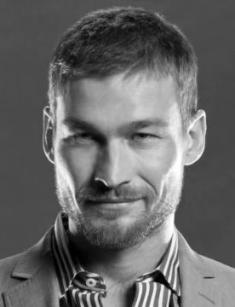 Andy Whitfield is an Australian actor of Welsh descent, who became world-famous for his role as Spartacus in the television series Spartacus: Blood and Sand. He also starred in the horror film The Clinic, the melodrama McLeod's Daughters, and the mystical thriller Gabriel. The actor’s death shocked his fans as Whitfield died at the meridian of his glory. People are still interested in this talented man and his work, so the documentary film about him, Be Here Now, caused a stir around the world.

Andy Whitfield was born and raised in Wales, in the town of Amlwch, which is considered the most northerly town in the country and is located on the island of Anglesey. The actor’s date of birth is October 17, 1971, although some sources indicate that he was born on July 17, 1972. It should be mentioned that his parents, Robert and Pat Whitfield, were ordinary people who did not belong to the art world.

At first, Andy Whitfield did not think about an acting career. After graduation from high school, the man entered Sheffield Hallam University in the English county of Yorkshire and earned a degree in civil engineering. Soon, Andy moved to Australia, where he settled in the town of Lidcombe. When the future screen star acquired Australian citizenship, he became a resident of one of the largest cities of the country, Sydney.

In Australia, Andy Whitfield continued to work as an engineer. But gradually he found a new hobby, photographing. Thanks to this activity, the young man got scouted by a modeling agency and tried to work as a model. At the same time, Andy studied in the school of dramatic art, after which he began to participate in auditions, trying to get a role. Whitfield’s path to stardom was difficult and thorny, but in the end, the man proved that everyone could achieve his dream regardless of age, origin, and education.

Andy Whitfield got the first desired role in 2004. He appeared in the seventh episode of the second season of the popular Australian television series All Saints. Then the actor played bit parts in other television projects, the crime drama The Strip, the romantic comedy Packed to the Rafters, and the melodrama McLeod's Daughters.

In 2007, Andy Whitfield got his first leading role in the mystical action movie Gabriel. He portrayed the last remaining Archangel Gabriel who tried to figure out what had happened in Purgatory. For his work in this fantasy thriller, Whitfield won the Film Awards for Best Male Debut.

Andy got the next significant role in the Australian horror film The Clinic, which was released in 2010. It should be said that this movie about six women searching for their newborns was based on the real story about the abductions of women for illegal adoption.

But the most significant role of Andy Whitfield is the character of the Thracian warrior, Spartacus, who became one of the most famous gladiators in Rome, in the historical television series Spartacus: Blood and Sand. This multi-part film became very popular with viewers, although it does not follow the events of the classic novel by Raffaello Giovagnoli. The script for the next season was written, but due to illness, Andy could not continue working on the project. So in the subsequent seasons, he was replaced by Liam McIntyre, also known for the TV series The Flash and The Pacific. Whitfield only voiced Spartacus in the sixth episode of the prequel Spartacus: Gods of the Arena.

When Andy Whitfield lived in the UK, he dated a woman named Terrica Smith for a long time. They later got married and moved to Australia. Their relationship was happy until Andy became interested in acting. His wife did not support his desires; she thought that it was just a dream, and her husband devoted too much time and money to this hobby. After a while, Andy Whitfield filed for divorce and became a bachelor again.

However, the man was not alone for a long time. In Sydney, he met his long-time friend, Vashti. As teenagers, they often met during tourist trips, and in Australia, they liked each other, feeling that they were two halves of a whole. Vashti was interested in psychology, philosophy, photography, and writing, and almost instantly became Andy's best friend. They quickly found common ground. Besides, the young woman fully supported Whitfield's endeavors in the film industry. Later, he admitted that she influenced his achievements.

In 2001, Andy Whitfield married his lover. They planned to celebrate the wedding on September 11 in Las Vegas. But then the tragedy happened in the United States, so the young people returned to Sydney and had a modest wedding ceremony in a small bookstore near the ocean.

Andy Whitfield and his wife lived together for more than ten years and had two children, son Jesse Red and daughter Indigo Sky.

In the spring of 2010, Andy Whitfield was diagnosed with non-Hodgkin lymphoma. He immediately began undergoing treatment at one of the primary care clinics in New Zealand. At the beginning of the summer, doctors reported that the actor was in remission. But after 12 weeks, it became clear that the disease had regressed. Andy went to the hospital again and began a brave fight against cancer. He underwent long-course chemotherapy, which, unfortunately, it had no effect on his condition.

Andy Whitfield died on September 11, 2011, in Sydney, after 18 months of struggle with lymphoma. His relatives and close friends attend the funeral service. They decided not to disclose the actor's place of burial not to turn the grave into a place of pilgrimage. So the date and place of the funeral are still unknown.

The documentary film Be Here Now was shot in memory of the actor, Andy Whitfield. They began to shoot it when the man was alive, but it became clear that the disease had come back. The creators planned to release the film in 2013, but in the end, it premiered in June 2015 in Los Angeles at the Annual Hot Springs Documentary Film Festival.

According to authoritative sources, Andy Whitfield’s net worth at the time of his death was estimated to be over $5 million.