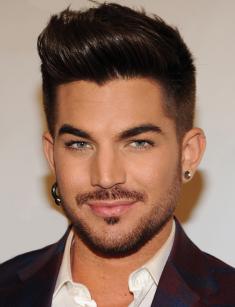 Adam Lambert’s fans often compare the musician to young Elvis Presley. The tall, handsome tenor is notable for his eccentric behavior on the stage; the majority of his songs become hits in America and all over the globe.

The would-be singer was born in Indianapolis on January 29, 1982. His mother, Leila, worked as a dental hygienist, and the father, Eber, was a program manager. Adam has a younger brother, Neil. The father came from Norway, but the kids were brought up according to the Jewish mother’s traditions. Speaking of his faith, the man says he is spiritual but not religious.

Right after the elder son was born, the family moved to Rancho Peñasquitos, San Diego, California; this is where the future star spent his childhood. Lambert took an interest in art early: he danced, sang, and participated in school performances. The parents wanted Adam to do sports to handle his energy, but the boy quitted soon; he decided to devote his life to singing at nine.

Lambert debuted in the school musical You're a Good Man, Charlie Brown. As the artist remembered later, he was not frightened; on the contrary, it was a pleasure for him to act in front of other people; besides, the boy liked to be among talented peers.

As a high-school student and later, the future celebrity participated in professional musicals and even toured in the United States and Europe with the hippie musical Hair. At 18, Adam entered California State University, Fullerton, but dropped two months later: the young man realized that he did not want to waste his time on the diploma he did not need; Lambert dreamed of the stage career. He moved to Los Angeles and got hired as an artist at a cruise ship. He danced, sang, and amused children for a year. At this period, his parents divorced.

In 2009, Adam met Carmit Bachar (Pussycat Dolls) who had just opened the night club Freedom; she invited Lambert to perform there. Soon, the young talent applied for the eighth season of the TV show American Idol.

The artist was selected in the program and reached the final; he lost to Kris Allen. After the final episode of the show, the winner called Lambert one of the most talented singers in the world. By the way, Kris’s career has been less successful than that of Adam.

Lambert recorded his first album For Your Entertainment with Pink and Lady Gaga; many songs turned out to be great hits. In 2010, the man debuted as a solo singer; the American, European, and Asian audience bought tickets to his concerts enthusiastically.

The second album, Trespassing, was released in 2012; 77 thousand copies were sold in the first week. The lyric ballad “Runnin” became the most popular song. In 2015, Adam presented the third album; its single “Ghost Town” is often considered to be his best work.

Both critics and colleagues emphasize the musician’s excellent singing abilities; his voice is compared to Whitney Houston: Adam’s singing range is unlimited. Besides, Lambert has a unique manner of behaving on the stage; he admitted he looked crazy sometimes, but it was the way of self-expression. Adam’s music videos are always stylish and dynamic.

Right after American Idol, the artist got engaged in charity work; he often donates money to help sick children and deliver drinking water to developing countries. In June 2012, Adam Lambert, Elton John, and Queen gave a two-hour concert in Kiev for free; the event supported fighting against HIV/AIDS.

The singer has often been nominated for prestigious prizes. He gained Much Music Video Awards – the UR Fav International Video for “Whataya Want from Me”.

The singer does not keep secret the fact that he is gay. He came out in 2009, right after he took the second place in American Idol. Several days before that, the media published the photo where Adam was kissing a man. Lambert said there was nothing unusual about it; however, some girl fans were disappointed, and the musician failed to receive the necessary votes.

Adam supports same-sex marriages; he is an LGBT activist who participates in theme concerts and festivals. However, he wants to be associated with music, not the struggle for LGBT people’s rights.

In 2009, the singer kissed the keyboard player Tommy Ratliff on the stage during American Music Awards. Later, he explained it was a spontaneous action.

Lambert used to date the Finnish journalist Sauli Koskinen for three years. They met in Finland in 2010 when the singer was giving concerts there.

Soon, Sauli left his job and went to America with his lover. The couple lived together and often visited social events or went for a walk. In April 2013, the men announced they broke up: they could not see each other because of Adam’s frequent concerts. Further on, journalists noticed them together. According to Adam and Sauli, they had no hard feelings for each other and tried to remain friends.

In 2015, the singer told Glamor he had had sex with several Hollywood stars who kept secret they were gay. He did not reveal their names and expressed his opinion that the Hollywood macho culture made them silent: it was easier to hide the truth to save millions of female fans.

In one of his interviews, Lambert confessed he felt attracted to confident women who smelled good. At the age of 29, the artist had an accidental contact with a woman; it was an “interesting” experience for him.

Adam is incredibly popular and holds concerts all over the world; he often participates in festivals, and his shows are scheduled for years ahead. The star appears on radio and TV programs and gives interviews to printed editions.

According to Lambert, he has been single since 2017.

Adam posts concert and personal photos on his Instagram page; thanks to his publications, fans get acquainted with some facts. For example, the singer has a dog Pharaoh; he took it from a shelter.

In February 2018, Lambert posted the wedding photos of his mother who married in Hawaii.