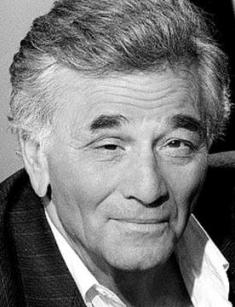 Fans of the American series Columbo are well familiar with Peter Falk: he was playing the smart detective investigating murders in the Los Angeles police for 24 years. The artist lived a long and bright life, and his body of work is impressive: 109 movies and series.

The would-be actor was born on September 16, 1927, in New York and grew up in Ossining known for its Sing Sing maximum security prison. The parents, Michael Peter Falk and Madeline Hochhauser, were Jewish and had Russian, Hungarian, Czech, and Polish roots. The Falk family migrated to the USA in the early 1890s from the Russian Empire. Peter’s parents worked in a haberdashery; they had no financial troubles during the Great Depression.

Falk had to encounter life ordeals when he was very young: a kindergarten teacher noticed that the boy turned his head when he wanted to look at something. The parents consulted a doctor. As it turned out, the child’s right eye had incurable retinoblastoma. Little Peter’s eye had to be surgically removed, and he started wearing an artificial eye.

“Another memory I have of that period is of me and my mother standing in front of a store window, looking at eye patches. I wore one in the beginning, but after I was a little older, they gave me a glass eye. Glass eyes aren't as practical as the plastic ones that came in a little later. In hot weather, the glass eye used to stick. I remember being told to take it out every night and put it in a glass of water”.

The prosthesis became a kind of weapon against the environment. As a high-school student, Peter played baseball and basketball. One day, the young man was unjustly sent off the field; he took out his artificial eye and threw it at the referee, screaming: “Try this!”

Falk debuted on the stage at 12: he spent the summer at the Jewish Camp High Point and participated in the opera The Pirates of Penzance by Arthur Sullivan and William Gilbert. By the way, the beginning actor and radio host Ross Martin was the boy’s teacher at the camp. Later, they collaborated in the movie The Great Race and an episode of Columbo.

After graduation, Peter Falk was a wanderer. In 1945, he enrolled at Hamilton College. War veterans were his groupmates, and there were no girls among the students: they continued to take care of the wounded in hospitals. A month later, Falk tried to get accepted at the United States Armed Forces but received a rejection because of his right eye absence. Eventually, the young man became a ship’s cook: nobody cared if he was blind or not.

A year and a half later, Falk came back from the sea and transferred from the college to The New School in New York. In 1951, the would-be artist earned a bachelor's degree in Literature and Politics and went to Yugoslavia where he worked at the railway for six months.

In 1953, Peter underwent an economics course at Syracuse University and became a Master of Public Administration. The next two years were marked with the analyst work and acting classes in New York.

The French actress Eva Le Gallienne was teaching drama at neighboring Westport. Although the road there took two hours, Peter attended her classes but kept being late because of his busy schedule. Eventually, Gallienne warned Falk that he would be expelled, and the young man told her the truth about his two-hour daily trips from New York; moreover, he was not a professional actor. The woman looked at him strictly and said: “Well, you should be”.

The next day, Falk submitted his resignation from the analytical company.

In 1956, 29-year-old Peter found his sphere. Eva Gallienne provided him with the recommendation letter for some New York theater agency, but Falk was told he would not act on the theater stage or on TV because of his condition: he had a habit of closing his eye partly from the moment of the surgery. Still, the artist got a small and non-paid role of Sganarelle in Molière’s Dom Juan. Further on, Peter became a Broadway actor and received secondary roles in detectives and melodramas.

1957 was marked with the television debut. The role in the short movie The Prince of Tomatoes in The Dick Powell Show brought the Emmy. The artist continued to play secondary characters. The part of the murderer in the low-budget gangster project Murder Inc. gave him the nomination for the Academy Award for Best Supporting Actor in 1961, but no victory followed. The next year, the most prestigious prize did not go to him again; he could have received the Oscar for Pocketful of Miracles.

The role of Lt. Columbo in the series under the same name made the actor famous all over the world. Initially, Peter did not want to accept the offer: he could not imagine how it was possible to appear on the screen each week and keep people’s interest in his stories. Nevertheless, Falk was conquered by the detective’s simplicity and closeness to ordinary people.

“People are still asking me why the series was such a success. <…> Personally, I think it was the character of Columbo. <…> People like somebody they can identify with. A man or person nor above them. So, I think they identify with the common aspects of Columbo. I mean, he's like everybody one of us. But at the same time, people have always been attracted to heroes, people who are bigger than life, exceptional. In some ways, Columbo is both.”

Indeed, Columbo bears some resemblance to Sherlock Holmes, and yet he is fundamentally different. The lieutenant is earthlier: he wears an old coat, showers people with seemingly naïve questions, and complaints about his wife. Columbo is more humane and ordinary, but it does not make him less intelligent or observant.

Peter Falk was working on Columbo for 24 years and appeared in 69 episodes; he directed two of them: “Columbo: Blueprint for Murder” and “Étude in Black”. The project brought him five awards: four Emmys and the Golden Globe.

The man met his first wife, Alyce Mayo when he was a Syracuse University student. They married on April 17, 1960. The couple had two adopted kids: Jackie and Catherine.

In 1976, Peter and Alyce divorced; however, they remained friends.

On December 7, 1977, Falk married the actress Shera Danese who co-starred with her husband in several episodes of Columbo.

In 2008, the artist’s health deteriorated. In April, the paparazzi took pictures of him as he was walking Beverly Hills streets with his hair and clothes messy. The rumors about Falk’s Alzheimer disease were confirmed in December.

The incapacitation process followed. One of Falk’s doctors revealed that the first dementia signs appeared in 2007 after several dental surgeries. Little by little, the actor was getting worse. He forgot his role in Columbo and could not recognize the daughters.

83-year-old Peter Falk died on June 23, 2011, in his own Beverly Hills house. The cause of death was pneumonia and progressing Alzheimer disease.

The funeral took place at Westwood Village Memorial Park Cemetery. The words “I’m not here, I’m home with Shera” were marked on the gravestone.

Peter Falk’s net worth was $14 million.