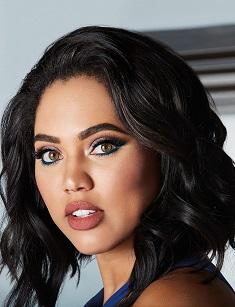 Ayesha Disa Curry is a Canadian-American actress, television host, and a famous cook. She has her own show Ayesha's Homemade and also a YouTube channel. Ayesha is married to a famous basketball player, Stephen Curry.

Ayesha Alexander was born in Toronto in 1989. Her parents are John and Carol Alexander, and she has four siblings, whose names are Maria, Jaz, Janiece, and Chad. Curry’s family has Afro-Jamaican, Chinese-Jamaican, and Polish descent, so Ayesha’s ethnicity and race are mixed a little. When Curry was 14, she moved to Charlotte, North Carolina, where, by the way, she met her future husband.

Curry’s interest in cooking emerged when she was little. Her mom, Carol, had a salon in the basement of their home, and young Ayesha watched her babysitter cooking Trinidadian curry and roti and brought for the customers.

In childhood, Ayesha had some personal problems because of her name. It was considered as unusual and not a pretty one. The thing is that Curry's father is a musician who loves Stevie Wonder. Wonder had a song named "Isn't She Lovely," where he mentioned his daughter whose name was Aisha. That's when John Alexander decided to call his daughter, Ayesha. Fortunately, now the actress likes her name!

Ayesha met a current NBA player Stephen Curry when they both attended a youth group in a Central Church in Charlotte, North Carolina. They were 14–15 years old then. However, Ayesha was not allowed to date guys when she was in high school.

These two met again a few years later. Ayesha was living in Los Angeles, and Stephen came here too for a sports awards show. That’s when their romance started. Soon the actress went back to Charlotte, close to Curry who was going to the Davidson College, where he played basketball. In July 2011, their wedding took place in their hometown. Now, the spouses have three kids together: two daughters, Riley (born in 2012) and Ryan (born in 2015) and a son Canon (born in 2018). At present, the family lives in Alamo, California.

Ayesha is always open to her followers, and after giving birth to her son Canon, she shared that she was struggling with hyperemesis gravidarum during her pregnancy. That’s a disease that can make the patient lose body weight, cause dangerous dehydration, etc. She had her thyroid and cyst removal in 2018, and everything ended well. By the way, there were some noticeable differences if we compare Ayesha’s third pregnancy with two others.

In February 2018, at the Ellen DeGeneres’ show, she announced that her due date would be somewhere in July and that she was feeling really sick, unlike in previous pregnancies. This gave Ellen the opportunity to jokingly declare “It’s a boy!”, which turned out to be true.

Curry has been very open about her health and struggles with hyperemesis gravidarum during her last pregnancy with her Canon, who was born in July.

Curry is a Christian and her family too. In one of her interviews, she commented on her faith that it is the foundation of everything Ayesha does in her life; especially, the religion is connected to her relationships with her husband and children.

Stephen usually has his training on Sundays, so the family watches a live stream of their North Carolina home church using their home computer or television. Ayesha calls it a modern but effective way to keep their faith strong in a technological age.

Before her marriage, Ayesha has been working as an actress. She is known for her roles in Dan's Detour of Life (2008), Love for Sale (2008), and Underground Street Flippers (2009). Besides, she sometimes appeared as a guest on television shows, including Hannah Montana (2009). However, now, her main occupation is her cooking career.

After giving birth to the first daughter, Curry needed to make a career change. She wanted to find something that she could do at home but still, be occupied by her interests. With her husband encouraging her, Ayesha decided to start her blog, where she could share her recipes and do what she loved. That’s how the young mom has begun sharing her cooking tips on her YouTube channel and later, since 2016, on her cooking show Ayesha's Homemade.

Curry also has her own company named Little Lights of Mine which sells its brand of an extra virgin olive oil, and 10% of income is donated to the charity No Kid Hungry. Apart from that, there is an online-shop Ayesha Curry Kitchenware, where you can buy cookware, tools, and accessories.

In 2016, Ayesha worked together with chef Michael Mina who owns the restaurant called The Mina Test Kitchen of International Smoke, and also that year, her cookbook “The Seasoned Life” was released. Besides, she started shooting in Ayesha's Homemade, which represents not only her career but also family life. The second season of this show was called Ayesha's Home Kitchen and had a premiere next year, in 2017.

In 2017, Curry became a spokesperson for the cosmetics brand, CoverGirl, and she was the first spokesperson who is not a singer or actress. Also then, she was announced as a new host of The Great American Baking Show. However, Ayesha starred only in two episodes, because the shooting had to stop due to sexual harassment allegations against one of the show's judges. In the next season, Curry did not return.

In 2019, there will be The Mina/Curry International Smoke restaurant opened at One Paseo in Carmel Valley, San Diego.

Curry is a very active user of social media networks. She has 6.4 million followers on Instagram and around 1 million on Twitter. On her Instagram, we can see a lot of family photos, especially of her children, and her own pictures which can make us think: how can she stay so hot and be a mom of three kids at the same time?

Speaking about Twitter, both Ayesha and Stephen are very open to various discussions. For instance, Ayesha once posted a tweet saying that “everyone's into barely wearing clothes these days huh? Not my style. I like to keep the good stuff covered up for the one who matters”. It received a lot of criticism for being judgmental of other people, but it’s true – Ayesha has never posted any frank, naked pictures.

In 2017, Stephen rather openly shared with his followers that he was not sure if he should accept President Trump's invitation to the White House after winning the NBA Finals. As a response to this, Trump withdrew his invitation via Twitter, and Curry answered with an eye-roll emoji.

As we can see, both Ayesha and Stephen are very modern: they have a lot of tattoos, an active social life and so on.