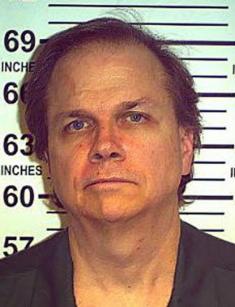 Mark Chapman is known throughout the world, but his fame is negative. In the pursuit of glory, the man killed John Lennon, a member of the beloved English band The Beatles, taking the idol away from the fans.

Mark was born in Fort Worth, Texas, U.S., in the spring of 1955. His father was a staff sergeant in the U.S. Air Force, and his mother worked as a nurse.

There is also another child in the Chapman family, daughter Susan; she is seven years younger than her brother. The boy's childhood was difficult, according to Mark, when he was little, he did not love his father and was very afraid of him because he often offended his mother and could even punch her and do her harm.

He attended Columbia High School in Decatur, Georgia. At the age of ten, he got interested in the band The Beatles, he even learned to play guitar and performed in a school rock band, for a long time collecting records of his favorite musicians. Love for the musicians was displayed in the look of Mark's room, which he decorated with posters and photos of John Lennon and other members of the band. In imitation of his idols, he dressed like them and even grew long hair.

A boy from a troubled family did not do well at school, and at the age of fourteen, he began to skip classes and tried drugs for the first time. At fifteen, Mark ran away from home and wandered the streets of Atlanta for the next two weeks. The bullying from classmates also influenced him and triggered this action.

Chapman was not athletic, so he was often hurt and even beaten. Soon he returned to his local school and continued his education.

During his absence, the young man joined the Young Men's Christian Association (YMCA) and actively promoted the interests of the organization. Faith in God, which since then became an integral part of his biography, radically changed his appearance.

Since then he started wearing a neat short haircut, always wore only a white ironed shirt with a tie and a suit. And during short breaks, all he did was read the Holy Scriptures. In the same period, he began to sell records of the Beatles, collected over the years.

Immediately after graduating from high school Chapman did not go to get a degree, some time lived in Chicago, and there he played guitar in local clubs, and did not forget about attending churches, because he was still part of the Young Men's Christian Association. The guy worked a lot and helped children. At the same time, he worked in the refugee camp, many spoke positively about him, noting his attention and care.

After coming back, Mark enrolled at Covenant College, an evangelical Presbyterian liberal arts college in Lookout Mountain, Georgia. By the time The Beatles had already broken up, the guy again began to be obsessed with his idol. This prevented him from studying, Chapman lagged far behind his classmates and did not have time to understand the material, so he was expelled after the first semester.

In his spare time, he reread Jerome David Salinger's novel The Catcher in the Rye and often tried to imagine himself in the role of the protagonist, Holden Caulfield, who questioned the values of society and often rejected the norms adopted in it.

After leaving College, Chapman returned to work in the refugee camp, but soon he left because of a quarrel with the management. After that, for some time he worked as a security guard. During this period, he was depressed, and couldn't overcome it and move on, and a little later he went to Hawaii, where he made a suicide attempt. The man was sent to a psychiatric hospital and diagnosed with clinical depression. Meanwhile, Mark's parents got divorced, and the mother came to her son in Hawaii. He was in therapy for some time and later was discharged.

At 24, Chapman went on a six-week trip around the world, he visited Bangkok and Singapore, Seoul, Geneva, Delhi, and other cities. After his marriage in 1979, he worked as a night watchman, at that time the man was drinking heavily, and because of that, Mark started to have obsessions. In his head, there was a strange symbiosis, the views of the author of the book The Catcher in the Rye, J.D. Salinger, and Lennon's thoughts, expressed in his songs, mixed with an inexplicable desire to get fame and love.

At the same time, the man began to imagine himself as Lennon and Caulfield at the same time, gradually losing the ability to think clearly. And he was aware of the problem and once even wrote a letter to a friend Lynda Irish, in which he stated, "I'm going nuts."

Mark's first love was Jessica Blankenship with whom he went to College together. He had tender feelings for her, so after the breakup, he got depressed.

His future wife Gloria Abe, Mark met during his travels around the world. She worked as a travel agent, helped the man to choose cities for the trip. It was then that the young people started going out, and in the early summer of 1979, they got married. They had no children. The personal life of the man turned out rather successfully.

The Murder Of John Lennon

Before he went to New York to murder Lennon, Chapman confessed to his wife that he was obsessed with this idea and even showed her a loaded gun. However, the woman chose to remain silent and did not contact the police and a psychiatric clinic.

Mark also said that a few days before his departure, while watching TV, he saw on the screen the words "thou shalt not kill." It affected him so much that the man even made an appointment with a psychiatrist. But the meeting with the doctor did not take place, because Chapman went to New York.

After arriving in New York, the man stayed in the hotel, and on December 8, 1980, leaving things in the room, he went to a bookshop, bought a new copy of The Catcher in the Rye book and signed it with the phrase "This is my statement." He had to spend most of the day outside the Manhattan house where Lennon lived, and Mark wasn't hiding, he was talking to the doorman, the artist's housekeeper, and other people. At this time he was expecting John.

In the middle of the day, Lennon left the house and went to the recording Studio. He was approached by Chapman and asked to sign Double Fantasy album; the singer fulfilled the man's wish, this moment was captured on camera. With him was photographer Paul Goresh, who took the last picture of the great musician in his life. He also promised Mark that he would make a copy of the photo, so Chapman remained standing at the entrance of the Studio pretending that he was waiting for it.

About 11 PM Lennon came out of the Studio, Chapman called the man, and then made five shots, four of which hit the singer. John fell, and Mark, meanwhile, lay on the pavement under a street light and began to read a book purchased a day before. He did not try to run away or hide, and when the police arrived, the man was arrested.

Lennon was bleeding, so eyewitnesses decided not to wait for the ambulance. He was taken to the hospital in a police car, but the doctors could not save the singer's life and almost immediately pronounced him dead. Within a few hours, the whole country learned that a member of the band "The Beatles" was shot

Chapman's first defender, a court-appointed lawyer, Herbert Adlerberg, withdrew from the case, as fans were ready to attack anyone who would take his side, including the murderer of John Lennon himself. Another lawyer, Jonathan Marks, was appointed to defend the man's interests. To protect him, he chose to refer to the mental disorder that Mark suffered from. But in June 1981, the prisoner dropped the defense and asked the court to declare himself sane. Meanwhile, the lawyer tried to object to the decision. But the judge accepted Chapman's statement, and also took into account the man's admission of guilt.

A few months later, the verdict was announced. When the word was given to Chapman himself, the man read the lines from the book The Catcher in the Rye, and also admitted that he came to New York that day with the sole purpose, to murder Lennon. He needed it for self-assertion and to draw attention to his personality.

The court took into account all the circumstances of the case. Despite the hard work of psychologists and psychiatrists who labeled him with different diagnoses (paranoid schizophrenia, manic depression, personality disorder, psychosis, etc.), the man was declared sane; he was sentenced to life imprisonment with the right to request pardon after twenty years.

Two years after the events, Chapman agreed to give an interview in which he told why he did it. According to Mark, he planned Lennon's murder for three months. The motive was the comment that the Beatles were "more popular than Jesus." The reason for the killing of such a well-known personality was the fact that Mark dreamed of fame and hoped to get it, taking away the life of a celebrity. He also claimed to have heard an ominous whisper calling for the musician's death.

After the sentence was pronounced in 1981, Chapman was placed in a maximum security prison, Attica Correctional Facility, which is located outside of Buffalo, New York. There he stayed until 2012, after which the criminal was transferred to the Wende Correctional Facility in Alden, New York, which is east of Buffalo. In 2000, he first used the right to file a request for pardon, because at that time he served a sentence of exactly twenty years. The court refused the man. A request for a conditional release can be submitted once in two years. So far, Chapman has not missed a single opportunity, although each time he receives a refusal.

In memory of the legendary member of the Beatles band, John Lennon, in 2007, the movie Chapter 27 was released. It is a biographical drama film, which focuses on the last hours of the life of the musician and the murderer. Jared Leto played the part of Mark Chapman in this motion picture Jared Leto.

Chapman is still in prison in New York State. The last time the man filed a petition for pardon in August 2018, but the court refused to release him for the tenth time. The next time the man will be able to file a petition in 2020.