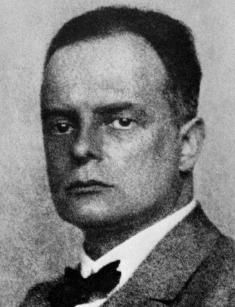 Paul Klee is a German-Swiss artist and teacher, whose unique style was influenced by progressive, creative movements, including Expressionism, Cubism, and Surrealism. The painter, who studied color theory, wrote many works, published in the form of lectures, Writings on Form and Design Theory, which became recognized in the field of modern art and were valued no less than legendary notes of Leonardo da Vinci.

The Paul Klee, born on December 18, 1879, was the youngest of two children of a music teacher, Hans Wilhelm Klee and Swiss singer Ida Marie Klee, née Frick. The artist's life was genetically predetermined. His talented parents encouraged the boy's passion for art and supported their son in his first steps in this field.

At school, Paul played the violin and was such a gifted musician that at the age of eleven he was invited to participate in a concert of the Bern Music Association.

Growing up, the boy put down the instrument and became interested in fine arts, began to study advanced artistic styles. Paul drew on every sheet of paper that fell into his hands. Early works were preceded by sketches in the margins of textbooks and notebooks, in which he improved his graphics skill, drawing lines, three-dimensional figures, and cartoons. The passion for painting prevented him from studying, so he barely passed his final exams at the "Gymnasium" of Bern.

In 1897, the guy began to keep a diary, which provided researchers with valuable information about the life and the view of the world of the young artist.

In 1898, Klee entered the Academy of Fine Arts in Munich and became a successful draftsman. He excelled at drawing form and perspective but seemed to lack any natural color sense. Despite all the difficulties, Paul received a bachelor's degree and went to Italy to study the works of the great masters of the past.

Returning to Bern, Klee settled in his parents ' house and began to develop as an artist, from time to time attending private painting lessons. He combined his work with playing the violin in the orchestra and writing theatrical reviews. By 1905 he had developed some experimental painting techniques, including drawing with a needle on a darkened glass, which produced the effect of the photographic negative.

Working on his technique, Paul created 57 paintings, including the work Portrait of My Father, dated 1906. At the same time, Klee created a cycle of eleven zinc-plate etchings depicting grotesque characters called Inventions. These works were displayed in the local gallery, and the visitors were fascinated by them. The author felt satisfied but knew that he could do better.

After marriage, Paul's career froze. The artist was distracted by domestic problems and the search for a new style and creative approach. The shift occurred after the first solo exhibition of Klee, held in Bern in 1911, after which the writer and graphic artist Alfred Kubin suggested that the artist should draw illustrations for Voltaire's Candide, that was published in 1920.

At that time, the number of grotesque drawings of the artist increased, and they showed a tendency to absurdity and sarcasm. Alfred Kubin liked these paintings, and he recommended Klee to the leading art critics of the country. In Autumn of 1911, Paul entered the circle of the creative elite, met Expressionist August Macke and Abstractionist Wassily Kandinsky. Appreciating the fascinating and clear mind and trusting new friends, Klee joined the editorial team of the almanac Der Blaue Reiter.

A few months later, Klee became one of the leading members of the creative team and at the second exhibition, organized by the publication, presented seventeen graphic works. The almanac introduced the artist to modern theories of color, the study of which he continued in Paris in 1912. During the trip, Paul became interested in Cubism and "pure painting" and began experiments with watercolor, which resulted in primitive landscapes.

A real breakthrough in the work of Klee occurred in 1914, after visiting the Republic of Tunisia. The artist merged with the bright colors of Mediterranean landscapes and mastered the technique of using the palette.

In the paintings of this period, Paul combined graphics and oil painting and enthusiastically began to create abstractions. The colored rectangle became the main subject of the artist's paintings. Combined with other figures, he created either a sense of harmony, either of profound dissonance, characteristic for pieces of music.

During the First World War Klee did not give up art. Working on the home front in a workshop restoring the disguise of balloons, the artist created lithographs on heroic themes and from time to time arranged exhibitions.

By 1917, Paul became a reasonably famous painter and graphic artist, whose paintings, recognized by art historians, sold well. The most famous work of that period was the canvas Ab ovo, painted in watercolor on gauze stretched over the canvas. In 1919, Klee signed a contract with the owner of the fashion gallery Hans Goltz, who brought the artist commercial success. It was there that the painter first exhibited the painting Moonrise and Sunset, which reflected his ideas about the magic of natural phenomena.

Since 1921, Paul combined his creative work with teaching. He got a job in the art school studio Bauhaus, renewed his friendship with Kandinsky and met other members of the talented teaching staff. At this point among the works of Klee were such paintings as Angelus Novus (New Angel), Southern Gardens and Diana in the Autumn Wind, later acquired by the best museums in the world.

In the 1920s, the artist gave lectures on art, held exhibitions in the United States and France, traveled a lot. He wrote the painting Senecio and The Goldfish, where he combined watercolor and oil paint.

Klee was an extraordinarily productive painter: in 1933, he created about 500 works. However, the following year the number of paintings decreased dramatically due to unexpected health problems. The feeling of the approaching death was reflected in the works of Paul: he started using bold lines and a strange combination of geometric shapes. The alternation of large and small objects, dark and bright colors symbolized mood swings of the fading talent.

In the early years, Klee behaved rather carelessly. He spent a lot of time in pubs, where he met women and had a lot of affairs. The result of such relations was an illegitimate son, born in 1900, who died in infancy.

In 1906, Paul married the Bavarian pianist Lily Stumpf, and a year later the family had a child, who was named Felix.

The couple settled in a suburb of Munich, and while the young wife gave private lessons, Klee kept house and raised his son. For the baby, Paul made glove dolls, which soon became part of the artist's works. Klee perfected the technique of reproducing the form and methods of creating texture.

Other details of the artist's personal life did not become public.

It is known that after Nazis led by Hitler came to power, Klee became a disgraced artist in Germany. Hiding from the regime, he moved to Switzerland, but during his life, he never gained citizenship of this country.

In 1934, Paul had the first symptoms of a fatal disease, and for six years the pain attacks interchanged with periods of remission.

In the spring of 1940, Klee's suffering reached its peak; he could not draw and always thought about his life coming to an end. The death came to him on June 29. The painter died in Muralto, Locarno, Switzerland. Doctors stated that the cause of death was the failure of internal organs, provoked by scleroderma.

The artist was cremated in the city of Lugano, and his ashes were buried at Schosshaldenfriedhof, Bern, Switzerland.

In 1997, the descendants of Klee handed over 700 paintings of the master to the Federal Office of Culture (FOC) of Switzerland, for the exposition of which an exhibition center named in honor of the outstanding master was designed and built.