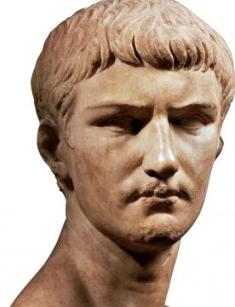 Caligula was Roman Emperor, the third representative of the Julio-Claudian dynasty, tribune, Grand Pontiff. He was known for his brutal reprisals and scandalous behavior. The ruler can be correctly characterized by the phrase he said:

Let them hate me as long as they fear me.

Caligula was born on August 31, 12 AD, in the city of Antium of the Roman Empire. His full name was Gaius Julius Caesar Augustus Germanicus. His father was the famous General Germanicus; his mother was Agrippina, the Elder. The boy was the sixth son in the family, and then Agrippina gave birth to three more daughters. Three of Caligula's brothers died in infancy.

The first two years of his life he spent in Rome, but soon he was sent to a military camp to his father. There the future Emperor was nicknamed "Caligula." The boy loved to change into the robes of the legionaries and wore little boots like soldiers. The soldiers began to call him Caligula-a diminutive of the word "caliga." Despite the prevalence of the nickname, the Emperor did not like it very much.

His father, Germanicus, died young, presumably the man was poisoned. The General enjoyed unprecedented popularity among the Roman people, and that caused envy and discontent in Emperor Tiberius. Germanicus was his nephew, but at Octavian's insistence, Tiberius adopted him. Despite this, he disliked him. The Emperor was very much afraid that with the love of the people, Germanicus would take away his power, because he was his first heir.

Immediately after the death of Germanicus, Agrippina and her eldest sons fell out of favor. Tiberius sent them into exile, where they were severely abused. The boys died of starvation, and the woman allegedly committed suicide, unable to withstand the beatings. Gaius was too young at the time, perhaps that's why he survived. His great-grandmothers took care of him.

When Gaius came of age, Tiberius summoned the boy. Detractors tried to turn them against each other. But Caligula showed discretion and caution in dealing with his grandfather. The young man started living at the court and studied very diligently. Some biographers argue that the pathological craving for cruelty and voluptuousness appeared in Gaius just at that time. He enjoyed watching the bloody executions and tortures that took place regularly at Tiberius's court.

It is not known for sure whether Caligula was involved in the death of Tiberius. It is, however, of no secret that the prefect Macro and Gaius were present at his death. According to the ancient Roman historian Tacitus, on March 16, 37, Tiberius did not die but lost consciousness. And when everyone congratulated Caligula, the Emperor suddenly opened his eyes. But Macro decided to end the matter by ordering the old Emperor to be strangled. It was said that Caligula had done it himself.

Gaius Julius Caesar Augustus Germanicus was welcomed to Rome. He at once proved himself a courteous and delicate ruler. Caligula granted amnesty to prisoners taken under arrest by Tiberius. In 37 AD, he gave people the right to vote again, expanded the rights of the Senate, restored the national Assembly. The liberalization of domestic politics at the beginning of Caligula's reign also touched other spheres of public life.

Some historians accuse Caligula of excessive extravagance, which allegedly led to the deterioration of the financial situation of the Empire. Indeed, he often showed unusual generosity-bestowed gifts on soldiers. But in the twentieth century, researchers changed their minds.

The fact is that there is no evidence that his successor Claudius had an acute shortage of money at the beginning of the reign. It is noteworthy that Caligula returned what Tiberius had abolished: he began to publish financial reports on the state of the Empire.

Contemporaries also remembered Caligula as an active builder. To improve the water supply in Rome, he began to build aqueducts. He completed the construction of temples and restored theaters. He began to build a circus on the Vatican field. To decorate it, he brought an obelisk from Egypt, for the transportation of which a special ship had to be built. In 1586, this obelisk was installed in the Vatican, in the center of St. Peter's square.

Caligula paid much attention to the transport infrastructure. For each section of the road, a caretaker was appointed to monitor the condition of the roadway. If these people came to business carelessly or plundered the money allocated for repair, they were severely punished.

In foreign policy, Caligula had made peace with Parthia. He strengthened his influence in remote regions by appointing loyal rulers. Also, the Emperor expanded the possessions of the Roman Empire in North Africa.

According to the chroniclers, soon, the Emperor became very ill. He did not appear in public for a long time. The people prayed for his recovery. And when Caligula recovered, all were unbelievably happy, but only for a brief period. His behavior changed dramatically after the illness. In the first place, he ordered the murder of Tiberius Jr. and his grandmother Antonia, the prefect Macro, and his wife. Every day the number of tortures and executions grew. They were performed in front of Caligula, right at dinner.

He committed atrocities everywhere. For example, he ordered to seize the first spectators on gladiatorial fights and to throw them on a maul to lions before having cut off their tongues so that they wouldn't be able to scream.

Caligula proclaimed himself a God by placing his statue in the form of Jupiter in a temple. One of the most violent acts of the Roman Emperor was the appointment of his horse named Inciatus to the office of Senator and then Consul.

From his Palace, he made a brothel, appropriating the proceeds from it. He executed the rich and confiscated their property.

Some researchers suggest that Caligula was ill with temporal lobe epilepsy. Others claim that he suffered encephalitis, which affected the brain and, consequently, affected his mental health. There is still a debate going on over the diagnosis of the Roman Emperor.

Caligula was married four times. His first wife was Junia Claudilla, the initiator of this marriage was Tiberius. And the nature of the union was political. However, when Junia was giving birth to their child, both she and the baby died.

At the beginning of the reign, he married Livia Orestilla, but within a few days, they divorced. In the I century, it was a common thing. In 38 AD, Caligula had taken Lollia Paulina as his wife. The reason for their divorce was the infertility of the woman. The Emperor had ordered her never to have sex with a man again. He probably didn't want to question his fertility.

His fourth lawful wife was Milonia Caesonia. She was seven years older than Caligula and already had three children from another marriage. But the main goal for Caligula became the birth of an heir. Caesonia bore the Emperor a daughter, Julia Drusilla.

Of course, the man was not known for marital fidelity. He did not hide his mistresses. And there were a lot of them. Ancient authors claimed that Caligula was also involved in incest with his sisters, and the historian Eutropius stated that one of them bore him a child. The chronicler Suetonius reported that the Emperor was bisexual.

Caligula's despotism drove the Praetorian commander Cassius Chaerea into a conspiracy. On 24th January of the year 41, the tyrant was assassinated in a theater hall. He had been stabbed over thirty times with swords. His wife, Caesonia, was also stabbed, and his little daughter, Julia, was killed by the centurion by striking her against the wall.

So, the Roman Emperor Caligula died after a reign of fewer than four years.

The Roman throne was given to his uncle, brother of Germanicus, Claudius.