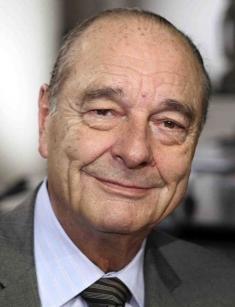 Jacques Chirac is a French politician who has gone from a civil servant to the President of the country. While holding senior positions in the government, he was distinguished by principled views and a firm position concerning many global problems.

As the leader of one of the leading and influential countries, Chirac argued for more socially responsible economic policies and sharply criticized the attack of American troops on Iraq. In the last years of his service, the rating of the head of state decreased, and he became one of the least popular presidents in modern French history.

Jacques René Chirac was born on November 29, 1932, in a prosperous Parisian family to the head of the aviation company Abel François Marie Chirac and a housewife, Marie-Louise Valette. The future President of France received his primary education at the capital's private school Cours Hattemer, and then continued his studies at the lyceums Lycée Carnot and the Lycée Louis-le-Grand. After receiving a bachelor's degree, young Jacques served as a sailor on a coal-transporter for three months.

In his youth, Chirac played rugby for a junior team, and at University he defended the colors of the student sports club.

In the early 1950s, Jacques joined the French Communist party and graduated from the Paris Institute of Political Studies. After spending the holidays at Harvard, the ambitious young man entered the ENA, the The École nationale d'administration and received a diploma in public service.

Having passed all possible stages of studying, Chirac enrolled in the French army. Becoming a reserve officer, he volunteered to fight in the Algerian War. After the injury, Jacques was demobilized, and he settled on administrative work in the Court of Auditors.

Chirac's political career began in 1962 when French Prime Minister Georges Pompidou appointed the young activist as a head of personal staff. Working in this position, Jacques established himself as a man capable of achieving the goal at any cost and was nicknamed Bulldozer.

This personal trait helped Chirac in the shortest possible time to get into the French government as Minister of Social Affairs and enter the entourage of General Charles de Gaulle. At that time, the country was shocked by the strikes organized by workers and students, which led to the resignation of the government and the change of the President. The situation was directly related to the activities of Jacques. He took part in negotiations with the demonstrators and played a central role in negotiating a truce.

When Pompidou became Prime Minister of France, his protégé was given the post of Minister of Agriculture and Rural Development and quickly earned a reputation as a defender of the interests of farmers and the enemy of agrarian policy of the United States, West Germany, and the European Commission.

In 1974, Chirac replaced Raymond Marcellin in a senior position of Minister of the Interior and in March began preparations for the 1976 presidential elections, in which he supported Giscard d'Estaing.

Jacques was right with the choice of the favorite: the new head of state chose Chirac to lead the cabinet in 1974. 41-year-old politician tried to reconcile the warring parties in Parliament, as well as promoted a number of reforms to improve the economic and social situation in the country. The lack of power led to the fact that in 1976, Jacques left the post of Prime Minister and began to acquire influential supporters needed to fight for the presidency.

In 1977, Chirac took up the newly opened post of mayor of Paris and continued to create his own political image, working for the welfare of the city and the country. After spending 18 years in the Palace of Hôtel de Ville, Jacques conducted many programs aimed at improving the lives of citizens of the capital.

In the 1981 presidential election, made his first run for president against the current leader of the country. He got 18% vote, which was not enough, and the mayor of Paris dropped out of the race and became the head of a group of right-wing opposition parties under the rule of elected François Mitterrand. When the Chirac coalition won a majority in Parliament, the leader of the right-wing again became Prime Minister of France and played a leading role in the internal affairs of the country.

After a series of unpopular programs, Jacques lost the 1988 elections, left the government and remained in political shadow.

The 1995 presidential campaign finally brought Chirac the fond post of French leader. The new President promoted tax cuts and programs to help the unemployed, which resulted in budget deficits and demonstrations. The pension reform carried out by Prime Minister Alain Juppé caused a general strike throughout the country, which led to the dismissal of the head of government.

Chirac's foreign policy of the first presidential term was remembered for the signing of the Comprehensive Test Ban Treaty and the refusal to eliminate military bases on the African continent. Besides, the head of France acknowledged responsibility for crimes against the Jewish nation committed during the Second World War.

The 1997 parliamentary elections weakened the President's position. Following the constitutional agreement, he gave the right to lead the country's economy to the legislature, and he focused on foreign policy and strategic issues. The president reduced the military budget and unsuccessfully tried to get closer to NATO.

In 2002, Chirac won re-election against Prime Minister Lionel Jospin and far-right politician Jean-Marie Le Pen. During the second term, Jacques reorganized the internal policy of the country and created a party called Union for a Popular Movement.

At the international level, the head of the French state united with Russian President Vladimir Putin against the US-British coalition that participated in the fighting in Iraq. Chirac threatened to veto a resolution in the UN Security Council that would authorize the use of military force to rid Iraq of alleged weapons of mass destruction and rallied other governments to his position.

In 2007, Chirac announced in a television address that he would not run for the 3rd presidential term. Summing up the presidential career, the long-term leader noted: "My whole life has been committed to serving France, and serving peace." The successor of Jacques as the President of France was the head of the Union for a Popular Movement, Nicolas Sarkozy.

After retiring from office, Chirac launched the Fondation Chirac that engaged in humanitarian activities aimed at preventing conflicts, providing the inhabitants of the planet with water and land resources and preserving the cultural diversity of the world's population. Jacques combined his charitable activities with his membership in France's constitutional council and his work on memoirs published in 2011.

The oldest daughter, Laurence, who suffered from anorexia nervosa, did not participate in the political activities of her father. In 2016, the President's daughter died of a heart attack. The youngest daughter, Claude, by contrast, actively assisted her father. Having grown up, she worked as a public relations assistant and after a while became a personal adviser of Chirac.

In 1979, Jacques and Bernadette "adopted" a 21-year-old Vietnamese young girl named Anh Dao Traxel. The couple did not issue official documents on custody but considered the young refugee a full member of the family.

During the presidency, Chirac did not advertise his personal life. On numerous photos taken during official events, the couple looked happy and satisfied. Together, the couple survived the fall of the plane Concorde at the Charles de Gaulle Airport and an assassination attempt, undertaken by a psychopath-Neo-Nazi.

In 2018, the former President of France turned 86 years old, and his health leaves much to be desired. According to journalists, Chirac is losing memory and suffers from heart problems.

Since 2005, Jacques suffered a stroke, underwent surgery to fit a pacemaker and was hospitalized several times during a trial in which the French leader was accused of economic crimes committed in the past.

Now, the Chirac family lives in a 180 square meter duplex on the Quai Voltaire in Paris.

Jacques Chirac, France’s ebullient, blunt-speaking and often flamboyant president who became best known in America for his vocal opposition to the invasion of Iraq and his advocacy of a “multipolar” world in which Europe would counterbalance American dominance, died Sept. 26 at 86. (via https://www.washingtonpost.com/)