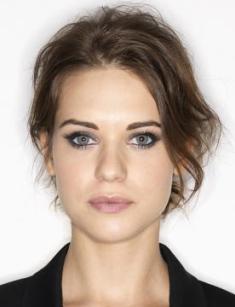 Lyndsy Marie Fonseca is an American actress who became famous for her roles in the TV series The Young and the Restless, How I Met Your Mother, and Desperate Housewives. She made her screen debut at the age of 13.

Lyndsy was born in Oakland, California, USA. The future actress was born on January 7, 1987, under the Capricorn zodiac sign. The girl's mother, Lima Bergmann, is Jewish of German and Irish descent, and her father, James Victor, has Portuguese ancestry.

When the parents divorced, the mother and daughter moved to Alameda, California. Soon, Lima got married again; thus, young Lyndsy had step-father Reid Dworkin and a younger half-sister, Hannah. After the marriage of the mother, the family moved to Moraga. The girl was lucky because the new family lived together happily; the future actress regularly attended school and was engaged in dancing.

The girl was fond of this activity; she showed remarkable skills and real talent. At the age of 13, Lyndsy had the opportunity to participate in the IMTA competition, in which she was a runner-up in the 'Young Miss Dancer of the Year' competition.

The event was held in San Francisco, where a CBS scout agent paid attention to the young star. As a result, the girl had to drop out of school and move to Los Angeles. So, Lyndsy Fonseca began her acting career in the City of Angels.

Lyndsy was cast in the role of Colleen Carlton in the soap opera The Young and the Restless, which aired for three years. Despite the busy filming schedule, the girl was home-schooled and successfully passed the high school exams.

After the TV series, Lyndsy played in television commercials and portrayed secondary characters in several projects. The slim actress (she is 5.41 ft. (165 cm) tall, weighing 116,84 lbs. (53 kg)) devoted her free time to training and dancing, perfecting her skills. The girl was especially good at step dancing.

Lyndsy had a good deal of luck, having played the role of protagonist Ted Mosby's daughter on the TV series How I Met Your Mother, which won prestigious awards, including the Emmy Awards, and the HBO show Big Love. In 2005, the girl was invited to portray the title character in the drama Cyber Seduction: His Secret Life and the movie Ordinary Miracles. At the same time, the actress appeared in other television projects.

In 2006, Lyndsy Fonseca appeared in several TV series, including Phil of the Future, Heroes, CSI: Crime Scene Investigation, House. In 2007, she was lucky to attend the casting of the TV show Desperate Housewives, in which she portrayed Dylan, Katherine’s daughter. For this role, the woman was nominated for the Actor award at the Screen Actors Guild Awards for Outstanding Performance by an Ensemble in a Comedy Series.

Lyndsy became really popular in 2010, when the eccentric comedy-thriller Kick-Ass, based on comics, was released. In this movie and in the 2013 sequel, Lyndsy's partners on the set were Nicolas Cage and Aaron Taylor-Johnson.

In 2010, she began shooting in the TV series Nikita, based on the notable movie of Luc Besson. Lyndsy had to learn Russian to prepare for the role of Alex. In this project, the actress’s partners were Maggie Q, Shane West, Devon Sawa. On the set, the woman met her future husband, Noah Bean.

In the TV series, the actress appeared as a rookie chosen for cold-blooded murders. But soon, the girl realized what she would face in the future and why legendary Nikita attempted to escape.

In 2010, John Carpenter’s horror movie The Ward was released, featuring Lyndsy Fonseca, Amber Heard, Danielle Panabaker. In 2015, the actress starred in the drama The Escort and the TV series Marvel's Agent Carter, based on the Marvel comics.

In The Escort, the actress portrayed a prostitute named Natalie. The girl earns large sums of money, but worries about her safety during unpredictable meetings with clients. At the same time, the woman of the night meets Mitch Cooper, a journalist who has been fired from his job and obsessed with sex. The young man begins to accompany Natalie, pretending to be the girl's bodyguard, hoping to write an exciting story.

Marvel's Agent Carter told the story of Peggy Carter, who tried to combine the life of an ordinary woman who lost the love of her life, Steve Rogers, with secretly assisting Howard Stark.

Lyndsy got a secondary role in the movie.

Then Lyndsy Fonseca starred in the virtual reality film Agent Emerson and the television project The Haunted.

The first movie focuses on a CIA employee. In the story, the man strives to leave the experimental program and do not be part of a game in which participants are under the remote control of the imperious General. The agent has to make an effort to retake the charge of his actions. Alex Emerson (Lyndsy Fonseca) helps him to do it.

After divorcing her first husband, the actress did not lose heart. She adores her family, especially her mother and stepsister, who also became an actress. The woman’s career continued to flourish and, she was also engaged in her favorite hobby, dancing.

On the set of the series Nikita, Lyndsy met her colleague Noah Bean. At first, the couple dated, then announced their engagement. The wedding took place on October 2, 2016.

In the autumn of 2017, the couple announced Lyndsy’s pregnancy. They shared the good news with reporters and then confirmed the information on social media and the red carpet. The actress posted a funny picture on Instagram, depicting the woman and her husband lying on the bed and reading books that future parents should study. At the same time, Lyndsy wore a tight-fitting sweater, showing her pregnant belly.

Later, Fonseca and Bean appeared at the Environmental Media Association Awards in Santa Monica, where they posed in front of cameras. At the same time, Fonseca emphasized the pregnancy, holding her baby bump.

In February 2018, the celebrity gave birth to a daughter. The girl was named Greta Lilia Bean.

In addition to dancing, the actress is interested in football, skiing, and roller-skating, visits relatives in Los Angeles, and travels with her husband. Lyndsy is actively sharing her success in new projects with fans, posting photos on Twitter and Instagram, and videos on YouTube. After the daughter’s birth, the actress often uploads pictures with Greta.

Lyndsy is an animal rights activist. In particular, there is a link to an article calling to stop the killing of elephants on Fonseca’s microblog.

In 2010, the actress was ranked number 62 on the Maxim Hot 100. The woman has two cats and a dog, Romi. Lyndsy speaks French, German, and a little Russian. The actress has several small tattoos behind the ear, on the wrist, ankle, and inner side of the arm. They depict an inverted pyramid, the name of the half-sister in Hebrew, the star of David, the moon, the word "faith" in Portuguese.

In October 2017, Lyndsy landed the title role in the science-fiction movie Curvature. Fonseca appeared as an engineer, Helen, who had a tough time after her husband's suicide. Then the girl learns something that makes her kill a man. Regretting the deed, Helen travels back in time to prevent crime.

Colleagues of the young actress were Linda Hamilton, Glenn Morshower, Noah Bean, and others.

Then, the actress appeared in the short movie My 'Friend' Mick, alongside her husband.