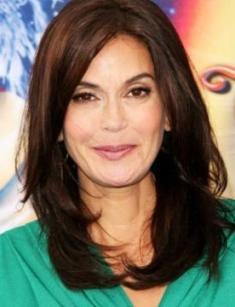 The full name of the actress is Teri Lynn Hatcher, who was born in December 1964 in Palo Alto, California. However, Teri spent her childhood years in the nearby town, being the only child in the family. Her parents had nothing to do with the world of cinema and any other art form. Teri's father was a nuclear physicist, and her mother worked as a programmer.

Teri Hatcher grew up like her peers. The girl loved to dance and enjoyed her school years. In groups of friends, she became a ringleader, but she never upset her parents with bad behavior or disobedience.

The only thing that Teri lacked during her childhood was her parents' attention. The Hatchers worked hard and left their daughter alone for a lot of time. At the same time, they always gave her pocket money for entertainment and fashionable clothes.

Teri Hatcher came to the "dream factory" by accident. Once a friend of the girl asked her to go with him to an audition of a Hollywood project. The girl agreed and did not regret it. Teri was offered the role of a mermaid in a popular T.V. show. Then she got a few more small parts. Thus, by the age of 16, Hatcher already had a respectable bank account.

After receiving her high school diploma, Teri Hatcher enrolled in the American Conservatory Theater. At the same time with her studies, she continued to receive a mathematical education.

After graduation, Teri Hatcher's cinematic biography continued. The actress starred in episodes of several popular T.V. series. The Love Boat and MacGyver became the most successful ones. Soon Teri was entrusted with the work in the soap opera Capitol.

The young actress with a model body and a penetrating look of brown eyes (Teri's height is 5 feet 47 inches, and her weight is 112 pounds) was invited to various popular projects. After Capitol, the girl performed supporting roles in the acclaimed series Star Trek: The Next Generation, L.A. Law, and Murphy Brown.

But the real high-profile success came to the young actress with the comedy series Lois & Clark: The New Adventures of Superman, which aired from 1993 to 1997.

Teri Hatcher's skills were improving, and it did not go unnoticed by critics and Hollywood directors. After the leading role in the crime movie 2 Days in the Valley, everyone understood that the girl could perfectly get into any, sometimes controversial characters and was suitable for work in different roles.

The peak of Hatcher's career is considered to be the role in the next movie about agent 007 called Tomorrow Never Dies. The picture was released in 1997 and brought the actress from California incredible world fame and status of a Hollywood star. Hatcher's partner in the 18th movie about the secret agent was Pierce Brosnan.

Then there was the popular comedy show Saturday Night Live, which took up most of Teri's time. But after the show, a long lull came in the career of the actress.

Teri Hatcher received a new wave of love and respect after the release of the legendary television series Desperate Housewives in 2004. The pilot episode of the sitcom had a resounding success. Felicity Huffman, Marcia Cross, Eva Longoria, and Nicollette Sheridan shone in this project. But fans of the series unanimously recognized that the character of Hatcher, Susan, eclipsed all others. In the story, the new neighbor, Mike Delfino (James Denton), became the lover of a divorced single mother, Susan Mayer. The young man revives the skeptical woman's sense of love.

Teri Hatcher received many honorary awards for her work in this project. The actress was handed a Golden Globe, and a Screen Actors Guild Award of the U.S. Teri also won an Emmy nomination. The sitcom came out seven years in a row. Eight seasons were filmed, and each of them featured Hatcher.

Teri Hatcher has the reputation of an actress who is disliked by colleagues. At the farewell party in honor of the end of the filming process of the series Desperate Housewives, the female leads signed cards to all members of the crew, but only from four actresses without mentioning Teri Hatcher. Despite all this, in interviews, the actress speaks with warmth and respect about her colleagues.

After the significant project, the actress was featured in the sketch show Funny or Die Presents..., and in the сomedy youth series Jane by Design.

In 2007, 40-year-old Teri managed to earn recognition as one of the most exciting models. The actress signed lucrative contracts with modeling agencies and became the face of the label Badgley Mischka. Previously, the faces of the brand were Mary-Kate, Ashley Olsen, and Sharon Stone.

In 2013, Teri Hatcher tried herself as a director, participating in the creation of the series Twisted about the life of a young guy Danny, whose girlfriend is found in the basement of his own house dead. The first suspect is the main character – Danny (Avan Jogia).

The first spouse of the actress was her colleague Richard Dean Anderson, whom the actress met on the set of the series MacGyver. The young people married in 1985 but separated after three years.

A year after her separation from Dean, Teri remarried. The second husband was again actor Marcus Leithold. But things did not go well too, and the couple put an end to their marriage, not even lasting together a year. In the new marriage, the actress also had no children.

Teri Hatcher's personal life took a turn in May 1994. Hollywood star and model got married to a colleague, Jon Tenney. A daughter, Emerson Rose Tenney, was born three years later.

In the winter of 2002, Hatcher learned about a tragedy: in Sunnyvale, where she spent her childhood and youth, a teenage girl committed suicide. When the actress heard the name of the suspected pedophile man who killed the child, she made a sensational confession. Richard Hayes Stone was the husband of Hatcher's aunt. Shaken by the tragedy of the girl's suicide, Teri could not remain silent and courageously admitted to experiencing a similar tragedy in childhood, in which Stone was involved.

This courageous act of Hollywood diva caused a real shock in society. The police, who received the necessary evidence, were able to put the maniac pedophile in jail. But Teri Hatcher's personal life was destroyed after that. The husband was not able to cope with his feelings and in March 2003, filed for divorce. But the star got respect and recognition as a multi-faceted and a strong personality, capable of a civil action.

In the spring of 2006, Teri Hatcher presented her autobiographical book Burnt Toast: And Other Philosophies of Life.

Hollywood stars need to carefully look after their appearance to stay in the ranks longer. Time flies, stress, and over-work on the set leave a mark on the appearance of stars. Teri Hatcher was no exception. The actress regularly resorts to soft plastic - injections of botox and Restylane. In 2010, the actress posted an honest confession and a personal photo taken in the shower on her account on Facebook. Teri Hatcher is continually updating her social media pages. The actress regularly posts family pictures with her parents and her daughter on Instagram.

Teri Hatcher has a net worth of $50 million. Now the actress can afford to act only in those projects that she likes. In 2016, Teri Hatcher's filmography was supplemented by the adventure comedy Sunset about the vacation of two high school students, which takes place in Mexico. In the movie, Teri played a minor character. The actress also appeared in the action-comedy Supergirl. The actress completed work on the series The Odd Couple in 2017.

Teri Hatcher stars in the crime comedy Madness in the Method about the acting secrets of Hollywood stars. The main character works on his acting skills so hard that the young man begins to be invited to one project after another.