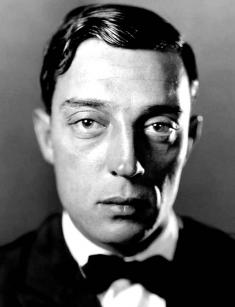 Buster Keaton is an American actor, known in the world of cinema as "The Great Stone Face" The popularity of the artist at the peak of his career was comparable to the demand of Charlie Chaplin. He is "The Great Stone Face" of an American silent film, Buster Keaton entertained people without sounds and facial expressions. A thin and insightful artist made the audience cry with laughter.

He was a stunt man, actor, director and artist of the era of cinematography formation. The authorship belongs to the Keaton films Sherlock, Jr., The Navigator and The General. In 1960 he received an Honorary Oscar for his contribution to the development of the cinema.

The comedian's real name is Joseph Frank Keaton. He was born on October 4, 1895, in the American city of Piqua, Kansas, and was the firstborn of Joseph Keaton and Myra Cutler. Later, the family had two more children.

His father owned a traveling troupe called Mohawk Indian Medicine Company, where he performed in a duet with his wife. He danced, performed acrobatics and showed funny sketches. His mother played musical instruments. There was the saxophone that was a rarity for that time. The famous magician Harry Houdini performed with the company.

It is curious that Houdini, a family friend, came up with the nickname Buster. One day the boy fell down the stairs and survived miraculously, he was picked up by a magician. He exclaimed: "What a buster!. Since then, Keaton Jr. was called Buster.

His biography from his childhood years was full of dramatic incidents: he was in the fire, managed to smash a joint on the finger, was in a train accident, received a head injury from a blow with a brick and caught in a tornado. Buster's luck was enviable.

Born in an artistic family, the boy could not escape the scene. His debut took place at the age of 3. Buster took part in the illusion "3 Keaton" together with his parents. His father threw him at his mother; acrobatics ended with falls and amused the audience because the boy remained unperturbed.

Respectable citizens complained of abuse of children to the authorities and exploitation of the boy's labor but he did not feel unpleasant sensations, judging by Keaton's memories. He liked that people laughed and enjoyed the show. Over time, Buster began to copy his father, who entertained the audience with facial expressions but his son did it worse. Then the young man invented a new way: his face showed nothing and it had an effect.

In 1917, Keaton's parents divorced because of his father's attachment to alcohol. Buster stopped appearing on the stage of the parent show but managed to get a role in the Broadway production with an unprecedented fee. The director paid him $250 a week. The fruitful cooperation was interrupted with an acquaintance with the famous comedian Roscoe Arbuckle.

The artist was considered the second after Chaplin at that time. He, like many, believed in the magic power of cinema. Roscoe invited Buster to participate in the short film The Butcher Boy. The movie was released in 1917 and had success.

Fourteen movies followed the debut. The beginning career was interrupted by a call in the army. During the First World War, Keaton was an employee of the infantry division and was sent to France. After returning home in 1919, he began to do again what he loved and collaborated with a friend. Projects of two comedians had a lot of money regularly.

In 1920, Buster decided to try his hand at directing. The first work was the film The Baldy Man with Bertie Elstin. Arbuckle moved away from the filming of comedies by that time, so Keaton led the company of Joseph Schenck. Perseverance and hard work helped to create projects that brought success.

Buster worked hard behind the camera and in front of it. Critics noted an expressiveness and a careful work in directing and acting. In 1921, the film The Play House was released, in which Keaton demonstrated amazing special effects for that time. Contrary to tradition, the director used moving cameras for filming and was a real innovator.

The company "Comic films," which he led, changed its name to "Buster Keaton Productions Inc.," the actor had a small share among shareholders. There were no screenwriters at the studio and the director composed the plot during the filming. Gags and improvisation were the basis of Keaton's movie. Operators did not stop shooting, not sparing the tape.

Keaton shot two films a year and he began work in 1923. The debut in this direction was the film The Three Ages, a parody of the movie Intolerance: Love's Struggle Throughout the Ages in 1916. 1924 gave two legendary tapes to the cinema. The first is called Sherlock, Jr. and describes the story of a projectionist, who dreams of working a detective. Keaton played the main role and he performed tricks. He finds a neck injury only ten years later, which he received during filming.

The next movie The Navigator made a splash. Buster was a real celebrity after it. His salary increased to $ 3.5 thousand and the actor bought an expensive mansion in Beverly Hills. In 1927, Keaton shot The General, a movie of the heroes of the Civil war. This film is a vivid embodiment of the distinctive manner of the comedian. He performs incredible tricks with an emotionless face, luring the audience with not sentimental techniques, which are peculiar to Chaplin.

An innovative look at the production, the spirit of the experiment, experiments with multiple images and the imposition of frames are distinctive features of Buster Keaton`s films. The technical uniqueness gave the director a head start in the competition for the attention of the public. The scene with the sending of the locomotive across the burning bridge in the movie The General cost Keaton $ 42 thousand.

Working with Buster Keaton Productions Inc., the actor released the final movie Steamboat Bill, Jr. in 1928. Joseph Schenck sold shares of «Metro-Goldwyn-Mayer,» and Keaton stopped to be an art director. The movie The Cameraman was released at the same time, which retained the inherent style of Buster`s directing but the next film Spite Marriage failed.

This point made the first sound films. It played against the comedian. In 1933, the studio broke the contract with him. The director survived the divorce and sought solace in alcohol. Then there was the European journey, after which he managed to recover. The company "Metro-Goldwyn-Mayer Studios Inc." offered Keaton a contract as an author of gags. And he again surprised everyone with his resourcefulness.

In 1938, Keaton became the artistic director of the Studio "United Artists Entertainment LLC" and released several witty comedies, which had a lot of money. The renewed popularity was on the decline. In 1949, the director began to work on television, starred in advertising, became a guest star of several TV shows. In 1949-1951, the comedian held concerts The Buster Keaton Show and The Buster Keaton Comedy Show. The audience remembered him and appreciated the talent of the actor.

In the 1960s, Keaton was again the star of the television screen. His filmography was supplemented with the films Around The World In 80 Days, It's a Mad, Mad, Mad, Mad World and others.

Buster Keaton could be called asocial. His popularity did not appeal to him and he chose his friends carefully. If someone had a chance to become a friend of Keaton, the new friend had to hear crack jokes. Buster did not have romantic relationships with actresses. He was attracted to ordinary girls and short affairs. He was known as a womanizer and was interested in all the women around. The comedian was attractive and his body remained in shape thanks to his acrobatic tricks.

Buster loved baseball, preferred hot, nutritious breakfasts in the morning, and didn't like to give interviews.

In 1921, Keaton married Natalie Talmadge to establish his personal life. A modest marriage marked the beginning of the family. There were two sons in the family: Joseph and Robert. The director shot his wife, children and parents in the film Our Hospitality. The couple had a worse relationship gradually.

After Natalie's statement about the end of their love life, Buster began to change. The parting with his wife ended with a binge and hasty marriage with the nurse Mae Scriven.

His next bout left no hope to the friends of the actor. He squandered money soon. By 1934, he had to get back to work and return to the fee of $ 100 and lunch. After two years, Buster divorced his second wife.

Circumstances forced him to reconsider his life position, attitude to women, actors and fees. Parties with a game of bridge were his only joy. Keaton met Eleanor Norris at one of the parties, who was 21 years old. In 1937, their wedding took place.

The girl managed to bring the actor back to life. The audience and professional community remembered about Keaton. Eleanor's economy and Buster's increased fee allowed them to buy a house. His friendliness returned him to his sons and grandchildren.

He did not know about the fact that he was sick with lung cancer until the last days of his life. The disease was the cause of death. Keaton continued to work until his last breath and he took the symptoms of the disease for bronchitis. He died at home in the arms of his wife on February 1, 1966.

There were staged photos and his films in memory of the great comedian and director. Buster never smiled in any movie except for the film Coney Island, which was released in 1917.

Critics still compare Buster Keaton and Charlie Chaplin, analyzing their partnership in a duet "Violin Piano", in the films Limelight, Starry Eyes. An unspoken competition connected them, warm, friendly relations and a significant mark in the cinema, left by the actor's and director's works. Buster Keaton had a net worth equal to $10 million.